Should the peace talks in Cyprus result in the island’s reunification, the Turkish economy could benefit from Nicosia's close ties in the eastern Mediterranean. 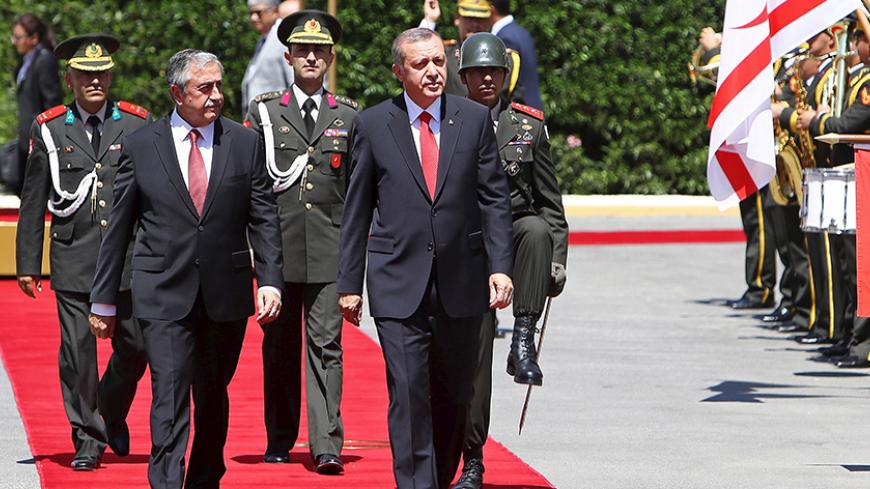 Turkish President Recep Tayyip Erdogan on July 20 expressed full support for the UN-sponsored peace talks in Cyprus, speaking at a ceremony in the Turkish Cypriot north of the long-divided island to mark the anniversary of Turkey’s 1974 intervention.

Mustafa Akinci, president of the Turkish Republic of Northern Cyprus (TRNC) since April, met with Greek Cypriot leader Nicos Anastasiades immediately after his election victory. The swift resumption of peace talks between the two sides came as a sign of their desire for a settlement.

Progress in the talks is recorded in the "AA papers," referring to both Akinci and Anastasiades, in which convergences are written down in black ink, while the demands and proposals of the Turkish Cypriot side are put in red and those of the Greek Cypriots in blue. A text fully in black ink means a breakthrough.

The joint declaration, agreed between Anastasiades and Dervis Eroglu, Akinci’s predecessor, on Feb. 11, 2014, still constitutes the backbone of the negotiations, which aim to reunite the island in a federation. Akinci said July 21 that the parties had agreed that the eventual federation, to be built on the principle of two equal constituent states, would be called the United Cyprus Federation.

The big economic gap between the north and the south makes the Turkish Cypriots more willing to compromise and settle the conflict. Hence, the TRNC — recognized only by Turkey — is in a much weaker position vis-a-vis the Greek Cypriot side, which is a European Union member.

The Turkish Cypriot economy relies mainly on tourism and private universities, where more than half of the some 67,000 students are from Turkey. Out of a population of 287,000, 40,000 Turkish Cypriots are public employees on the state payroll. More than 50% of the TRNC’s foreign trade is with Turkey.

Ankara has long propped up the TRNC financially through economic and financial aid agreements signed every three years. The funds are used to pay the salaries of Turkish Cypriot public employees and public finance services. Isolated internationally, Turkish Cypriots are able to use communication, transport and postal services only via Turkey.

The TRNC has its own central bank, ministries and parliament but lacks a national currency, using instead the Turkish lira. Should the negotiations succeed and the United Cyprus Federation be established, the Turkish Cypriot economy will undergo a profound transformation, switching from the Turkish lira to the euro, which is already in use in the Greek Cypriot south. This would mark the beginning of an arduous process for the Turkish Cypriot side as all payment and expenditure mechanisms, economic and commercial operations, and financial transactions will have to adapt to the euro and become harmonized with EU legislation and regulations. The use of the euro would erode the Turkish Cypriots’ economic bonds to Turkey, while contributing to their economic independence and integration with the EU.

The euro zone, however, remains the subject of a heated debate amid the severe economic crisis plaguing Greece despite a second bailout package. The tough financial conditions imposed on the country to keep it in the euro zone may be soon looming for Greek Cyprus too.

The Greek Cypriot economy, part of the euro zone since 2008, relies heavily on tourism and financial services. Its banking sector, made attractive with tax advantages, has lured notable amounts of foreign capital, mainly from Russia. However, the 2009 global financial crisis and the ensuing turmoil in Greece hit the Greek Cypriot economy hard. The banking system came to the brink of collapse, rescued by a 10-billion-euro ($11 billion) EU-International Monetary Fund bailout package.

Thus, if the island is reunified, the Turkish Cypriot transition to the euro will see the economic maladies of the south and the euro zone spill over to the north. In such an eventuality, the Turkish Cypriot economy, unable to stand on its own feet, would seek help from the European Central Bank rather than Turkey’s. The north would become dependent on the south and therefore on the EU, while for Turkey, the settlement of the Cyprus conflict would come as a major economic and political relief.

In addition, Turkey is spending billions of dollars to resolve the TRNC’s water and electricity problems with undersea pipes and cables. A report on the issue by Turkey’s National Security Council says the idea for the south to also benefit from these projects could backfire as the Greek Cypriots will likely reject dependence on Turkey.

EU Commission President Jean Claude Juncker’s meeting with Akinci during a visit to Cyprus on July 16-17 was important in terms of the Turkish Cypriots’ relations with the EU and their eventual transition to the euro in the case of a settlement. The Greek Cypriots, who used to protest EU officials’ visits to the north, kept silent this time, boosting hopes for a settlement with EU support.

Speaking at a meeting of business people from the two sides on July 8, Akinci stressed that Cyprus’ economic prosperity should be increased and shared. In a remarkable message to the Greek Cypriot side, he said, “Our interlocutors at the negotiating table are not our enemies but the partners with whom we’ll be building a common future in the days to come.” In further remarks earlier this month, he had said the talks had moved to “the main issues," and that "the price of division is higher than the price of a solution.”

Some observers, however, are pessimistic. Huseyin Bagci, head of the international relations department at Ankara’s Middle East Technical University, believes the talks will fail.

“The resumption and continuation of the negotiations is good, but they are unlikely to bear result. Both sides speak positively in public, but their real thoughts are obviously different,” Bagci told Al-Monitor.

“First of all, the Greek Cypriot side should be willing to share power. Otherwise, the negotiations can drag on for months, with the problems being postponed. What’s the objective here? A political solution or conflict prevention? The conflict has been prevented already. If the objective is a political solution, namely a single state, they need to go back to the 1960 agreement,” Bagci said, referring to a set of accords that marked Cyprus’ independence from Britain and introduced a power-sharing constitution, with Turkey, Greece and Britain designated as guarantor states.

In Ankara’s eyes, however, an eventual settlement means getting rid of a 41-year-old problem with all its economic and military burden and an opportunity to return to the eastern Mediterranean. Turkey today has its ties severed with Syria, Israel and Egypt, and its commercial routes in the region are blocked. Moreover, Turkey’s ill-advised foreign policy has left it sidelined from regional energy cooperation on natural gas reserves, while Egypt, Greek Cyprus and Greece have boosted ties at summits in Cairo and Nicosia.

In the words of Turkish Cypriot journalist Metin Munir, “Turkey is fed up with the Turkish Cypriots being spoiled.” Ankara now hopes that Anastasiades, who had backed the failed Annan Plan in 2004, will strike a deal with Akinci before his term ends in 2018, with a settlement plan put to the public in a referendum and adopted in 2016.