A fight over profits has disrupted the water supply from Turkey to Turkish Cyprus less than three months after a unique water pipeline was inaugurated, threatening to leave Turkish Cypriots with neither water nor vital financial aid from Ankara. 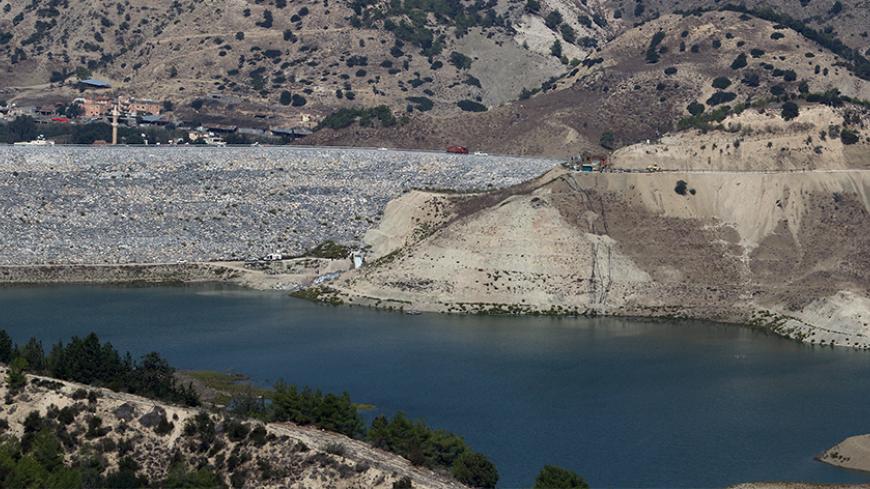 A reservoir in Myrtoy is pictured that will receive fresh water from Turkey via a water pipeline project linking Turkey to northern Cyprus, Oct. 17, 2015. - REUTERS/Yiannis Kourtoglou

ANKARA, Turkey — The latest four-year economic assistance protocol between Turkey and the Turkish Cypriots expired on Dec. 31, 2015. The agreement was supposed to be renewed for the 2016-18 period, but the two sides failed to agree on its terms. As a result, the Turkish Republic of Northern Cyprus (TRNC), which is recognized only by Ankara and relies on its assistance to survive financially, failed to pay the traditional 13th salaries and pensions of its public employees and retirees at the year-end as well as supply certain funds for farmers.

Turkey's Justice and Development Party (AKP) government has conditioned the renewal of the aid protocol on an agreement regarding the distribution, sale and billing of the water that Turkey recently began pumping to the drought-stricken TRNC. What was promoted as “the project of the century” became operational in October. It involves an 80-kilometer (50-mile) undersea pipeline built at a depth of 250 meters (820 feet) in the Mediterranean Sea to carry 75 million cubic meters of water annually from the Dragos Creek in Turkey’s southern Mersin province to the Gecitkoy Dam on the northern Turkish Cypriot coast.

The pipeline — completed in four years at a cost of 1.6 billion Turkish lira ($533 million) — was one of the AKP’s showcase achievements ahead of the Nov. 1 general elections last year. When the water began to flow on Oct. 17, 2015, inauguration ceremonies were held on both coasts with the participation of top officials, including Turkish President Recep Tayyip Erdogan and Prime Minister Ahmet Davutoglu and their TRNC counterparts, President Mustafa Akinci and Omer Soyer Kalyoncu.

The events were marked by exalted speeches, with the two sides hailing the pipeline as an inseparable bond between them. Akinci voiced hope that the project would help peace efforts on long-divided Cyprus and strengthen the Turkish Cypriots’ hand in settlement talks with the Greek Cypriots. Erdogan, for his part, said, “If the southerners [Greek Cypriots] also wish to make use of the water, we could then call it 'the water of peace' and supply it to them as well.”

In less than three months, however, “the project of the century” has devolved into a serious conflict between Turkey and the TRNC. The Turkish Cypriots, who expected both fresh drinking water from household taps and irrigation water for their citrus orchards and fields, are deeply disappointed.

Disagreements on how the water will be distributed, sold and billed have deadlocked the talks on the financial aid protocol, threatening to grow into an economic and political crisis for the TRNC. The AKP government, which supplies the water for free, wants its distribution and sale to be privatized through a tender based on the build-operate-transfer model and under Turkey’s control. It argues the TRNC’s municipal administrations are financially weak and cannot afford the 600 million Turkish lira ($198 million) required to build the 411-kilometer (255-mile) distribution network.

The TRNC, for its part, maintains that the distribution, sale and billing of the water should be up to municipal administrations, as it is at present. The 28 Turkish Cypriot municipalities have already created a joint company for that purpose: the Municipal Water and Sewage Enterprise.

The dispute has led the Turkish State Hydraulic Works to halt water distribution in the TRNC. The water flow is now sometimes let into the Gecitkoy Dam and sometimes into the sea for what officials call “technical reasons.” Because the dam is newly built, they say, filling it all at once is technically risky for the concrete's durability.

Yet many argue that a row over the big profits to be made from the distribution and sale of millions of cubic meters of water lies at the heart of the problem.

Veteran Turkish Cypriot journalist and economy writer Metin Munir points to rent-seeking as the main reason for the dispute. He wrote in late December, “According to rumors circulating in Nicosia, the AKP has already decided which company will get the water. There will be a tender, of course, but everyone knows how tenders work in the Turkish lands.”

Stressing that the issue has opened a rift in the TRNC’s ruling coalition, Munir argued that Turkish Cypriot arguments in favor of municipal control were also driven by financial considerations: to make sure that the government and municipalities make use of the water money.

The rift has raised the specter of the coalition’s potential breakup and early elections. The main coalition partner, the leftist Republican Turkish Party, sides with the municipalities, while the junior one, the right-wing National Unity Party, favors the AKP’s privatization formula.

Akinci is now in a difficult situation. At a time when settlement efforts on the island have gathered speed, a government crisis in the TRNC threatens to weaken his hand at the negotiating table, the opposite of what he had hoped for at the pipeline’s inauguration.

A number of developments have recently boosted optimism that the Turkish and Greek Cypriots are moving close to reconciliation after more than four decades of partition. In a historic move on Christmas Eve, Akinci and Greek Cypriot President Nicos Anastasiades issued a joint message of peace in each other’s languages, and on Jan. 1, the two sides' power grids were connected. A government crisis in the TRNC might have an adverse impact on the peace talks as well.

Meanwhile, in Turkey, the AKP faces accusations of imposing fiats on the Turkish Cypriots. In a statement last week, Erdogan Toprak, a senior lawmaker for the main opposition Republican People’s Party, warned that the AKP’s stance in the water dispute threatened the settlement talks.

“If this rent row between the AKP and TRNC government … leads to a political crisis and a disruption in the negotiation process, the responsibility will rest with the AKP government, which has been imposing its own formula, ignoring the will of the TRNC, its people and municipalities,” Toprak said. “The AKP would be liable for missing a historic opportunity for a settlement in Cyprus in the name of granting the distribution and sale tender to a company or a contractor close to itself. The TRNC coalition government, for its part, will share the responsibility if it sustains this showdown and deadlock in the name of having the rent for itself and partisan municipalities.”

Unless the water row between the AKP and TRNC governments is resolved soon, Turkish Cyprus risks being left without either water or money.