Turkish Cyprus has been plunged into a political crisis in the wake of Ankara’s imposition of a tough water-supply agreement coupled with the suspension of financial aid to the island. 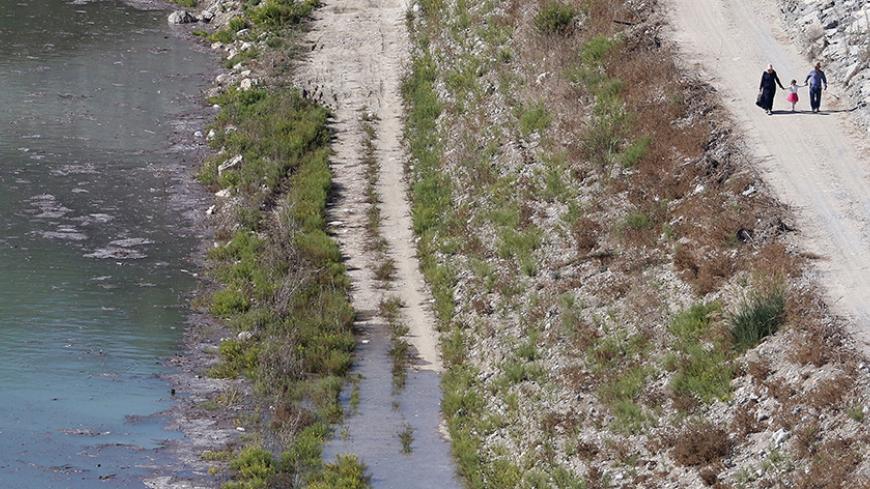 A family takes a stroll next to a reservoir in Myrtoy that will receive fresh water from Turkey via a water pipeline project linking Turkey to northern Cyprus, Oct. 17, 2015. - REUTERS/Yiannis Kourtoglou

With much fanfare last October, Turkey inaugurated Water of Peace, a 50-mile undersea pipeline carrying water from Turkey to the drought-stricken Turkish Republic of Northern Cyprus (TRNC). It was a sign of Ankara's unwavering support for the enclave, which only Turkey recognizes and supports. In January, Al-Monitor reported that Turkey's Justice and Development Party (AKP) government was pressuring the TRNC to give the water distribution and sales rights to a private monopoly and warned that this could lead to a political crisis in the TRNC.

After lengthy bargaining, Prime Ministers Ahmet Davutoglu of Turkey and Omer Kalyoncu of the TRNC signed the bilateral Water Supply Agreement on March 2. Following the signing, the right-wing National Union Party (UBP), which is close to the AKP, decided to pull out of the TRNC ruling coalition because of disagreement over the distribution and revenues provisions, which it supported, and the government resigned on April 5. Turkish Cypriots had pinned much hope on this coalition, which was seen as a broad-based reconciliation government, bringing together the UBP and the left-wing Republican Turkish Party (CTP).

Two factors related to the AKP stand out in the collapse of the coalition: disagreements on how profits from the water deal would be shared and the suspension of Ankara’s financial support for the TRNC in January after the two sides failed to agree on the terms of an assistance protocol. Stripped of Ankara’s aid, the TRNC was hit by a financial bottleneck and failed to fully pay the salaries of public servants in March.

The Turkish Cypriot government crisis has weakened TRNC President Mustafa Akinci’s hand in ongoing peace negotiations with Greek Cyprus to end the island’s long-standing division. The negative impact on the peace talks is likely to increase with a new, right-wing coalition having been formed April 16 that excludes the CTP, which backs reconciliation with the Greek Cypriots and the accession of Turkish Cyprus to the European Union (EU). The talks were already expected to enter a period of stagnation in the coming weeks due to parliamentary elections in Greek Cyprus scheduled for May 22.

As Akinci prepared to visit Germany April 12-13, the water agreement stood at the center of the political crisis at home. Ahead of the visit, Akinci gave UBP leader Huseyin Ozgurgun the mandate to form a new government.

The water deal imposes tough terms on the TRNC. Under the accord, Turkey pledges to supply the TRNC with 75 billion cubic meters of water annually, and the TRNC pledges to buy the entire amount. Turkey retains the right to re-sell the water to third parties, which means that if the Greek Cypriots are interested in taking water from the pipeline, they are supposed to negotiate with Ankara, not the TRNC. A private company will have exclusive monopoly rights on the distribution and sale of the water from Turkey, along with exclusive rights on the TRNC’s overground and underground water resources for 34 years.

Also under the deal, the TRNC agrees not to grant royalties to other companies. If annual purchases fall below the stated amount, the TRNC pledges to pay the difference to the company. It also agrees to hand over to the company, free of charge, its existing storage facilities, distribution infrastructure and bill collection rights, along with whatever is nationalized, to build new distribution networks. The company is allowed to bring in personnel, materials and equipment without any prior permission from TRNC authorities and tax free. It also has the right to build a power plant to meet its own electricity needs and add the resulting cost to water bills.

The most crucial aspect of the deal is the absence of pricing terms, with the company allowed to fix the price “according to performance.” In other words, the TRNC pledges to buy 75 billion cubic meters of water at an unknown price and guarantees that it will pay whatever price the company sets.

With the agreement now facing a vote in the UBP-controlled parliament, the opposition is arguing that the AKP government is behind the UBP leaving the coalition and getting the mandate to form a new one. Trade unions see the water agreement as an “AKP invasion of the TRNC.” Calling on Turkish Cypriots to take to the streets, the Teachers Trade Union, the Revolutionary General Labor Trade Union and the Municipal Workers’ Trade Union say the deal usurps the rights not only of Turkish Cypriots, but also of their Greek co-islanders, arguing that it amounts to the island’s “colonization.”

On the Greek Cypriot side, which joined the EU in 2004, the 34-year water monopoly the agreement creates has been similarly decried as a blow to EU norms and legislation as well as to the peace talks and efforts to create a united Cyprus federation.

Akinci, ahead of his visit to Germany, reiterated his hope for a peace deal with Greek Cyprus in 2016, but both he and the negotiations are headed for a rough patch. Following his election victory in April 2015, Akinci had angered Turkish President Recep Tayyip Erdogan by saying that Ankara should stop patronizing Turkish Cypriots and calling for a relationship of equals. With the water deal imposed on the TRNC and financial aid suspended, Erdogan and the AKP have left Akinci “besieged” in the peace talks with the UBP holding power.

Hovering above all this is the widespread expectation that the water monopoly rights will be granted to a pre-determined company close to the AKP through a token public tender.