Turkey hopes for British support as it takes on a more hawkish posture on the Cyprus conflict, risking fresh tensions with the European Union. 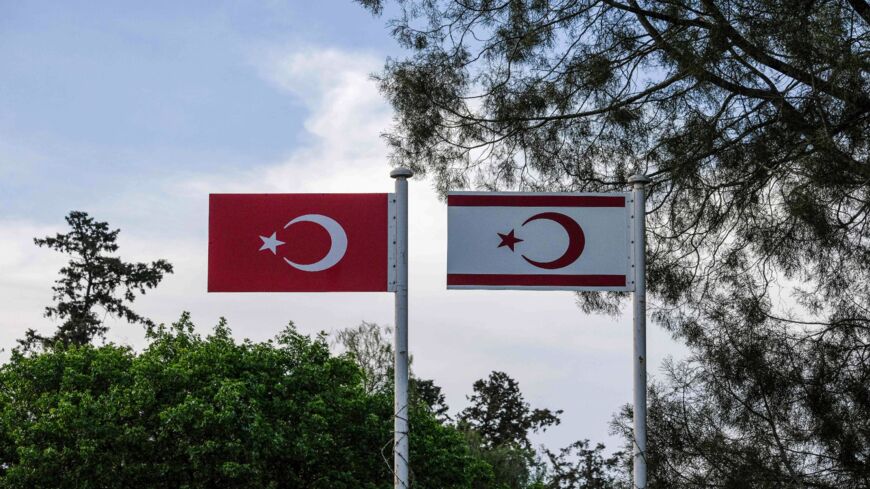 A picture taken from the Greek-Cypriot side of the divided Cypriot capital Nicosia on April 24, 2021, shows metal flags of Turkey (L) and the self-declared Turkish Republic of North Cyprus (TRNC), recognized only by Ankara, above the Turkish-controlled side of the divided capital. - AMIR MAKAR/AFP via Getty Images

Few were surprised that a UN-sponsored summit failed to jumpstart settlement talks on the Cyprus conflict last week, but Turkey sees the meeting as a “turning point” in reshuffling the cards and upping the ante on the long-divided Mediterranean island.

The most intriguing aspect of the April 27-29 meeting in Geneva was perhaps the attitude of Britain amid signals that it might readjust its Cyprus policy in a way more favorable to the Turkish side. Britain, along with Turkey and Greece, is a guarantor state of Cyprus, which has been divided along ethnic lines since Turkey’s military intervention in 1974 in response to a Greek Cypriot coup aimed at uniting the island with Greece.

Since its exit from the European Union, Britain has sought a closer relationship with Turkey and displayed new flexibility on the Cyprus issue, irking the internationally recognized Greek Cypriot government and Greece, which rely on their EU membership as their prime lever in the Cyprus conflict. The EU admitted Cyprus in 2004, but the island’s division meant that the Turkish Cypriots were left out in the cold. Only Ankara recognizes and props up the Turkish Republic of Northern Cyprus (TRNC), proclaimed in 1983.

In remarks to the Sunday Express just days before the Geneva summit, Turkish Cypriot President Ersin Tatar urged the British government to lend support to his proposal for a two-state solution in Cyprus, which he would formally submit at the talks with strong backing from Turkey. Tatar “believes that after Brexit freed Britain from the EU it can now fulfill its role as a neutral guarantor for the Eastern Mediterranean island, ensuring that both Greek Cypriots and Turkish Cypriots are treated in a balanced way,” the Sunday Express wrote.

For many observers, the tension between Britain and the Greek Cypriots was the most noteworthy thing about the summit in Geneva, where Greek Cypriot leader Nicos Anastasiades was seated just opposite British Foreign Secretary Dominic Raab.

The six-point proposal that Tatar put forward in Geneva calls for “establishing a cooperative relationship between the two states on the island based on their inherent sovereign equality and equal international status.” The proposal is essentially aimed at a two-state solution on the island, as Turkish President Recep Tayyip Erdogan has argued in recent months in a sharp departure from Ankara’s long-standing position that Cyprus should be reunified as a bi-zonal, bi-communal federation. The core of the matter is about recognizing the political equality of the Turkish Cypriots.

Though Anastasiades rejected such a recognition, the Turkish Cypriot side has now officially placed the two-state proposal on record at a UN meeting attended by all parties to the conflict; hence Turkish Foreign Minister Mevlut Cavusoglu’s description of the summit as “a turning point” in the Cyprus issue.

From that point on, resuming formal settlement talks without a Greek Cypriot recognition of the political equality of the Turkish Cypriots would be a surprise.

The basic argument in Ankara is that the status of the Greek Cypriot side as an internationally recognized EU member state versus the non-recognition of the TRNC has fundamentally damaged the notion of equality at the negotiating table, thus blocking a fair solution.

In this context, Ankara sees the Geneva summit as a success. With its own EU membership bid at a dead end, Ankara reckons that the EU has little leverage left to pressure Turkey on the Cyprus issue. So, it is raising the stakes by preconditioning the resumption of settlement talks on equal status for the TRNC.

To counter the Greek Cypriot rejection in Geneva, Ankara is said to be mulling moves to boost its diplomatic posture. According to pro-government Turkish media, Ankara is contemplating efforts to convince friendly countries to acknowledge the TRNC. Pakistan and Bangladesh had recognized the TRNC after its proclamation in 1983, only to retract their decisions under international pressure. A British acknowledgment of the TRNC would be a momentous development with far-reaching implications. Ankara is reportedly planning also a diplomatic push to persuade friendly countries such as Azerbaijan and Qatar to launch direct flights to the TRNC, whose residents can fly abroad only via Turkey at present.

Moreover, Ankara is likely to brandish the card of annexation — or union between Turkey and the TRNC — in a bid to bolster the two-state proposal. It should come as no surprise if the union option is floated in Turkey in the coming months, even if for political consumption on a domestic scene with many potential buyers.

In sum, the Geneva summit showed that Cyprus no longer has a roadmap for settlement talks as the objectives of the two sides are now sharply diverged, with the Turkish Cypriots pressing for a two-state solution and the Greek Cypriots insisting on reunification.

Still, the parties agreed to another five-way meeting under UN auspices within several months to keep up diplomatic appearances. First of all, no one wants to take the blame as the party quitting the negotiating table. Similarly, Antonio Guterres would not like to be remembered as the UN secretary-general who threw in the towel on the Cyprus issue, which, along with the Israeli-Palestinian conflict, tops the longest-lasting disputes on the UN agenda. Finally, neither Ankara nor Athens is interested in irritating Washington as the Joe Biden administration is starting to engage with the region.

Ankara apparently pins hope on Britain to counterbalance the EU support that the Greek Cypriots and Greece enjoy. The pair has already succeeded in turning maritime territorial rows with Turkey in the Eastern Mediterranean into a Turkey-EU problem. A series of European Council resolutions since last year have framed the disputes as an EU foreign policy matter and threatened sanctions on Turkey unless it stops unilateral gas exploration. The EU wanted to take part in the Geneva talks but had to make do with observers following Turkish objections.

The stance of the Biden administration will be another crucial factor. Washington is unlikely to back the two-state solution proposal or moves aimed at the TRNC’s recognition. Washington has repeatedly urged Ankara to halt drilling operations in disputed waters in the Eastern Mediterranean and in October denounced a Turkish Cypriot decision to reopen a seaside resort considered a no-man’s land since the island’s partition. Ankara hopes that British mediation could get the Biden administration to go easy on Ankara.