Egypt advances cooperation with Greece and Cyprus in the Eastern Mediterranean despite Turkey’s rapprochement attempts. 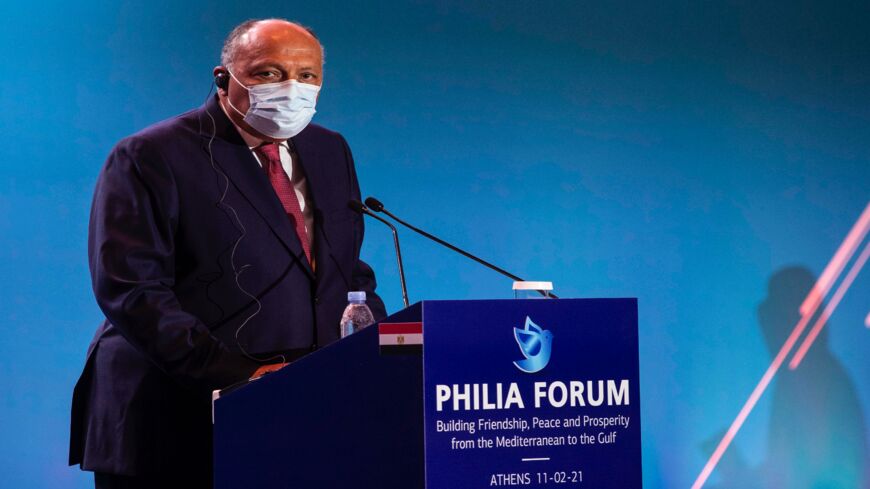 CAIRO — The latest signing of a tripartite cooperation program deal between Egypt, Greece and Cyprus will strengthen military coordination between the three states and allow them to act together in the face of threats in the Eastern Mediterranean, military and political analysts in Cairo said.

However, the same deal can stoke tensions in the region, especially with Turkey closely watching and gritting its teeth in anger at spiraling cooperation between the three Mediterranean nations, they added.

“Growing military cooperation and coordination between the three countries surely provokes the Turkish side,” Nasr Salem, a retired Egyptian army general, told Al-Monitor. “This growing cooperation mainly aims to rein in the Turks and trim their violations in the region.”

Senior military officials from Egypt, Greece and Cyprus signed the deal in Athens on April 6.

It comes hard on the heels of close military cooperation between the three states, including through a series of joint military exercises, some of which involve other countries such as France and the United Arab Emirates.

The Greek Ministry of Defense, which unveiled the deal on April 6, did not disclose many details about it.

It said it would further upgrade military cooperation and the interoperability of the armies of the three countries.

Egypt, Greece and Cyprus have already intensified their military coordination in the Eastern Mediterranean, including through the aeronautical Medusa exercises.

This close military coordination comes against the backdrop of rivalry among the three countries on one hand and Turkey on the other over rights to hydrocarbon resources in the region.

Turkey angered Athens and Nicosia several times in recent years by sending its seismic survey vessels to disputed areas with the two capitals.

In October 2020, Egypt, Greece and Cyprus condemned what they described as Turkey's “illegal drilling” and seismic operations in Cyprus' exclusive economic zone and continental shelf.

This drilling, they said, violates marine areas delimited in accordance with international law, including between Cyprus and Egypt.

The two countries signed a maritime delimitation deal in 2003. Egypt and Greece signed a similar deal almost 17 years later. Turkey rejected this last deal and declared it “null and void.”

Apart from its disputes with Greece and Cyprus over rights to hydrocarbon resources, Turkey is also at loggerheads with Egypt for ideological reasons.

The two countries stand at two opposing sides of the ideological spectrum, with Ankara courting the Muslim Brotherhood, the very Islamist movement Egypt is launching an all-out war against, both at home and abroad.

This is opening the door for fervent rivalry between the two countries, including in Libya where Cairo and Ankara used to back two opposite sides.

Rivalry between Cairo and Ankara is morphing into a war for reordering the region, from a mere ideological conflict, analysts said.

“The two countries have already gone beyond their customary ideological conflicts,” Egyptian independent political analyst Abdelmonem Halawa told Al-Monitor. “They are now in the stage of rivalry over influence, and this is clear in the Eastern Mediterranean, in Libya and in Africa.”

Egypt has been building up its naval and military power for several years now to protect its economic interests in the Mediterranean and the Red Sea and also to repel potential violations, including from Turkey.

The populous Arab nation with a powerful military has purchased a wide range of naval units, including submarines, frigates, corvettes, speedboats and helicopter carriers from several countries, including from France, for the same purpose.

In recent weeks, Turkey has been trying to undermine the growing amity between Egypt on one hand and Greece and Cyprus on the other by launching a charm offensive aimed at wooing Cairo.

Turkish officials launched into a series of positive remarks about Egypt in a clear departure from their rhetoric in the past years, including Minister of Defense Hulusi Akar who said in March that Egypt and his country shared history and traditions.

These comments came just as Egypt and Greece were locked in a dispute over exploration rights in an area within their territorial waters.

After arriving in Cairo and meeting Egyptian Foreign Minister Sameh Shoukry, Dendias said the issue was merely a “technical one” and that it was solved.

Egypt then said that normal relations with Turkey would require a change of Turkish policies.

On April 8, the former chief of staff of the Turkish navy, Cihat Yayci, said Egypt stands to win an additional 6,209 nautical miles if it scrapped its maritime boundary delimitation deal with Greece and signed a deal with Turkey.

A day later, Egypt reportedly postponed talks with Turkey, scheduled for the end of April.

By moving ahead with forging closer military ties with Greece and Cyprus, analysts said, Egypt demonstrates its lack of confidence in the newly found Turkish interest in warm relations with it.

“Egypt is not convinced of this Turkish interest, simply because Turkey has failed in translating its rhetoric about better relations into actions,” Halawa said.

This is probably why Cairo is moving ahead with military cooperation with both Athens and Nicosia. The two capitals have ample reasons to do the same.

Military cooperation between the three countries gained a new momentum after 2014, especially after Egyptian President Abdel Fattah al-Sisi took the reins of power in his country.

Egypt sent its fighter jets to Greece for joint drills with the Greek air force several times in the past years.

The navies of the two countries also hold recurrent drills, including most recently in February this year.

The new deal will most likely increase coordination between the militaries of the three countries in the face of threats to their security and economic interests in the region, military analysts said.

They added that the same deal puts military cooperation and coordination between the three states into a legal framework and further stresses common action between them in the coming period.

“The deal will enhance military coordination between the three countries, including through the exchange of visits and increasing training, with the aim of confronting common challenges in the Eastern Mediterranean,” Ahmad al-Awadi, a member of the Egyptian parliamentary committee on defense and national security, told Al-Monitor. “Relations between Egypt, Greece and Cyprus are assuming strategic proportions, which qualifies them for joint action in the face of regional security threats.”