Is Turkey-Egypt maritime agreement dead in the water?

Turkey's efforts to secure a demarcation agreement with Egypt in the eastern Mediterranean seem fruitless as Cairo remains indifferent to Ankara's signals. 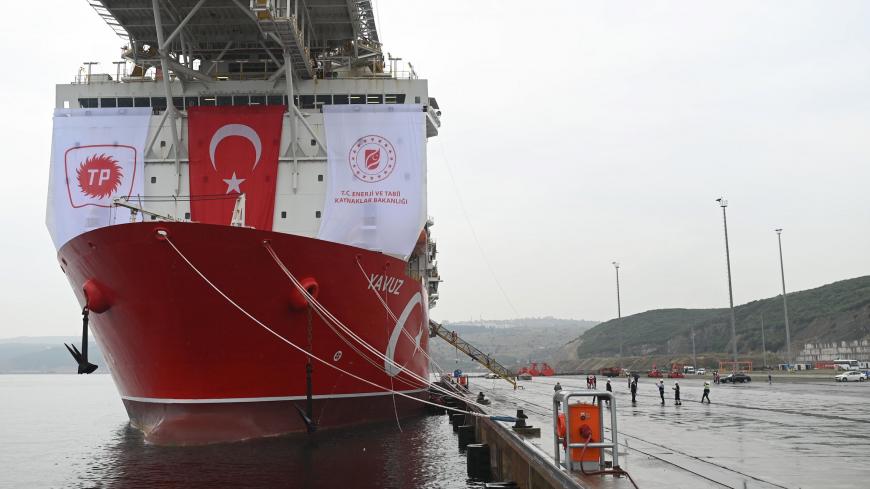 The Turkish drill ship Yavuz, scheduled to search for oil and gas off Cyprus, is seen at the port of Dilovasi, outside Istanbul, on June 20, 2019. - BULENT KILIC/AFP via Getty Images

Turkey is trying to pull Egypt to Ankara's side in the energy rivalry over the eastern Mediterranean by sending constructive signals to Cairo after Turkish “hard power” tactics in the region failed to bear fruit. Yet Turkey’s courtship seems remains unrequited as Egypt has yet to directly respond to Ankara’s advances.

Ankara’s foreign policy, which is based on the Blue Homeland doctrine calling for a more aggressive posture on maritime rights, envisages that Turkey should mend ties with Egypt and Israel to counter the Cyprus-Greece bloc’s territorial claims in the eastern Mediterranean. From Ankara’s vantage point, Egypt could secure a greater maritime jurisdiction area in the contested waters by reaching a maritime deal with Turkey and withdrawing from the deal it reached with Greece and Cyprus.

The rapprochement between Egypt and Turkey during the election of Libya’s new interim leaders has raised expectations for a possible partnership between the two countries over the eastern Mediterranean, and a fresh sign from Cairo has further encouraged Ankara to push for its goal.

On Feb. 18, Cairo announced a new bid round for hydrocarbon exploration in some blocks in the eastern Mediterranean, including in Block 18, a disputed area between Turkey and Greece. A map published along with the announcement was in line with Turkey’s self-proclaimed continental shelf boundaries in the disputed waters.

“This is a very important development,” Turkish Defense Minister Hulusi Akar said, hailing the map during Turkey’s Blue Homeland naval exercise. “We have many shared historical and cultural values with Egypt,” he added, hinting that the coming days could see “further progress on the matter.”

Ibrahim Kalin, the spokesman for President Recep Tayyip Erdogan, also confirmed Ankara's willingness to advance its ties with Cairo. “A new chapter can be opened, a new page can be turned in our relationship with Egypt as well as other Gulf countries to help regional peace and stability,” Kalin told Bloomberg. “Egypt is an important country in the Arab world, I mean it still remains the brain of the Arab world, the heart of the Arab world.

Turkey’s official Anadolu New Agency argued that the Egyptian map released for the tender announcement was a manifestation of Cairo’s acknowledgment of Turkey's territorial claims in the disputed waters and its willingness to negotiate a maritime deal with Ankara.

While the Turkish officials' remarks might have been aiming to prepare the Turkish public to a potential normalization with the Sisi administration, Ankara’s optimism seems to be misleading for a number of reasons. First,  Block 8 — one of nine blocks that Egypt launched a tender for in the eastern Mediterranean in February — is to the east of the 28th meridian and hence out of the scope of the maritime demarcation deal Egypt and Greece agreed on in August 2020. The agreement, which aimed at countering a controversial maritime deal reached between Ankara and Libya’s Tripoli government, covers an area between the 26th and 28th meridians.

Egypt limited the scope of this deal to the 28th meridian as it claims no right to the east of this meridian where Athens and Ankara have overlapping territorial claims, including the maritime boundaries of the Greek island of Kastellorizo just off the coast of Turkey. Thus, the map of the tender Cairo published wasn’t an indication of a dramatic shift in the Egyptian stance over the disputed waters.

Furthermore, following Dendias’ talks in Cairo, the Egyptian government updated the map accompanying the tender announcement, redrafting the boundaries of Block 8 and removing the parts of it that extended to the west of the 28th meridian.

Retired Adm. Cihat Yayci, who is also known as the architect of the Blue Homeland doctrine, warned that a limited maritime deal with Egypt for the east of the 28th meridian would spell the collapse of the Libyan deal and a loss of some 40,000 square kilometers of territory in the disputed waters. Yayci’s warning might be seen as an admission of the backlash over Ankara’s controversial Libyan move.

Sezer also concurred that such a deal “would be a trap” as it would legitimize Greece's and Cyprus’ territorial claims in the eastern Mediterranean. “Turkey is facing a situation in which high prices would be paid because of the missteps,” he told Al-Monitor. The current impasse shows that Erdogan’s government has failed to foil the plans of Turkey’s regional rival as he once claimed.

While some Turkish officials have voiced cautious optimism, saying the technical talks between Ankara and Cairo were still ongoing, the Egyptian media reports indicate nothing much has changed on Egypt's part. Diplomatic sources told Egypt’s Al-Sharq that Cairo has no intention to negotiate a maritime deal with Turkey in the short run, adding that Cairo maintains its rejection of the maritime deal reached between Ankara and Libya’s Government of National Accord.

Moreover, Turkey’s military presence in Libya, Ankara’s support of the Muslim Brotherhood (which Cairo designated a terrorist organization) and Erdogan’s anti-Sisi posture still remain as major barriers to the improvement of ties. Although Erdogan has scaled down his angry outbursts against the Egyptian leader, the Turkish president still salutes his supporters with a Rabia sign marking the resistance of Muslim Brotherhood members.

Unal Cevikoz, a former Turkish ambassador and now a senior member of the main opposition Republican People’s Party, said Ankara’s failure to normalize diplomatic relations with Egypt — a regional powerhouse in the Middle East and North Africa — during the past eight has been a “grave mistake” on the Turkish government’s part.

Still, Cevikoz said it is “never too late to mend” relations and called for a complete overhaul in Ankara’s Egypt policy. “The gap [between the two countries] has widened because of a general blindness in Turkey’s foreign policy and a tension-oriented approach over a dialogue-oriented one,” Cevikoz told Al-Monitor. “Closing this gap and establishing fair, equal and well-balanced ties with Egypt require highly serious efforts. A comprehensive approach is needed that extends well beyond the [goal of a] maritime demarcation deal.”