The naval forces of Egypt, Greece and Cyprus conducted joint military exercises in the Mediterranean amid tensions with Turkey over its drilling activities in the area. 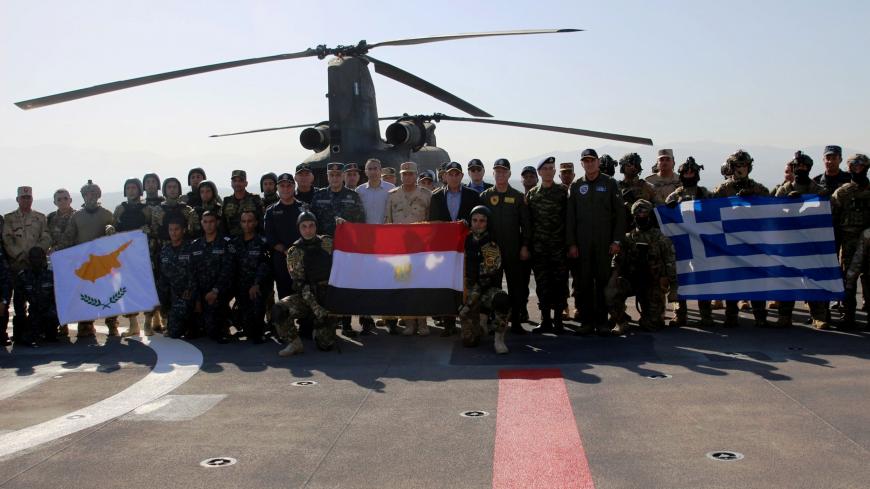 Troops from Egypt, Greece and Cyprus pose with their national flags while taking part in joint military exercises, seen in a picture uploaded Nov. 6, 2019. - Facebook/MoDGreece

Egypt, Greece and Cyprus launched Nov. 3 a new set of joint air-to-air military exercises, codenamed Medusa 9, to counter “potential threats in the Mediterranean,” according to the Egyptian Ministry of Defense.

The spokesman for the Egyptian Armed Forces, Col. Tamer al-Rifai, said in a press statement Nov. 3, “Within the framework of the annual plan of joint exercises carried out by the armed forces to strengthen and support military cooperation with brotherly and friendly countries, joint air training activities codenamed Medusa 9 were launched with the participation of elements of the navy and air forces as well as Egyptian, Greek and Cypriot special forces, which lasts for several days at the Mediterranean Operation Theater in Greece.”

The training was at first held between Egypt and Greece on a yearly basis beginning in 2014. Cyprus joined the drill in 2018, participating in both Medusa 6 and Medusa 7 last year. This year’s training comes “in light of the growing partnership and military cooperation between the Egyptian armed forces and brotherly and friendly countries and demonstrates the high level of combat capabilities and training provided by the participating forces to meet the growing challenges in the Mediterranean region,” Rifai added. Medusa 8 was held in April.

According to oil and military experts, in the latest drill the participating countries used much more modern military equipment as tensions with Turkey over gas excavation operations in the Mediterranean are growing.

Turkey has been carrying out offshore drilling operations off Cyprus — a move that has been condemned by the European Union (EU) and the United States. In May, Turkey sent its drilling ship Fatih to a region west of Cyprus. On June 20, the general manager of Turkey’s main oil exploration company, Turkiye Petrollei, said that Yavuz, a second drilling ship, has been sent to an area northeast of Cyprus.

On Nov. 11, the EU approved a sanctions mechanism against Turkey in response to its violations in Cypriot waters. The EU said the mechanism “is a way to sanction individuals or entities responsible for or involved in unauthorized drilling activities of hydrocarbons in the Eastern Mediterranean.”

Angelidis told a news conference after the Egyptian-Cypriot-Greek talks, “We condemned Turkey's illegal actions in Cypriot waters, which are a flagrant violation of international law, as well as Turkish provocative acts of violating Greek airspace and its territorial waters.”

Zaki said at the same press conference that it is necessary to continue cooperation between the three countries to meet the challenges and secure common interests in the face of Ankara's actions.

Also at the news conference, Panayiotopoulos expressed his gratitude to the Egyptian and Greek defense ministers and their countries for their strong and firm stand in supporting Cyprus when it comes to these issues.

The three ministers agreed to continue joint military exercises and deepen defense cooperation in other areas such as cybersecurity and crisis management.

Tharwat Rageb, head of the Petroleum Engineering Department at the Egyptian Chinese University in Cairo, said that Turkey is violating international regulations by carrying out gas excavation operations in the Mediterranean and that this may lead to a military action by Egypt, Cyrus and Greece against Ankara.

“Turkey’s acts violate the United Nations Convention on the Law of the Sea, increase regional tensions and warn of an imminent military conflict,” Rageb told Al-Monitor.

“A military action by Egypt, Greece and Cyprus is not excluded at all given Turkey’s stand,” he added.

Turkey and Cyprus have been in conflict since 1974, when Turkey invaded Cyprus, causing a division in the island between Greek and Turkish Cypriots. Turkey has been saying that it drills for gas in areas belonging to Turkish Cypriots, while Cyprus says that Turkey is violating Cyprus’ maritime economic zone.

Ragheb described the exercises as unprecedented as the forces used the Mistral helicopter carrier in the joint maritime drill. He said Egypt is a state that protects its territories and does not threaten others.

“Egypt only preserves its land and these drills come as part of efforts aimed at securing the interests of the three countries in the eastern Mediterranean,” he added.

In press statements Nov. 10, Hisham el-Halabi, adviser to the director of Nasser Military Academy and a member of the Egyptian Council for Foreign Affairs, said repeated military drills between the three countries in a relatively short period of time are aimed at thoroughly identifying the area.

“They represent a deterrent force for those who tend to target our resources, whether a state or terrorist elements that may move under the umbrella of a group or a state,” he said.

“Medusa is a message that we are able to protect our economic objectives outside our territorial waters in cooperation with other friendly countries. The drill includes many modern weapons like the Mistral helicopter carrier. This confirms the ability of our armed forces,” Halabi added.

Hani Farouk, an expert in planning and managing oil and gas projects and a member of the nongovernmental organization Egyptian Experts Association for Development, said the drills come as Egypt is seeking to become a regional energy hub and requires the protection of its regional waters.

The establishment of the forum seeks to offer competitive prices and build a regional gas market as well as coordinate efforts between Egypt, Greece and Cyprus to protect their national interests and eastern Mediterranean waters.

“This is a real game changer for Egypt, Greece and Cyprus and Turkey would not easily allow that. However, the three countries are getting prepared for any escalation,” Farouk told Al-Monitor.