What’s behind the Egypt, Cyprus rapprochement?

Egypt, Greece and Cyprus have been taking steps to get closer to one another, culminating their rapprochement with the Eastern Mediterranean Gas Forum that would obstruct the Turkish drilling for gas in the Cypriot Exclusive Economic Zone, according to observes. 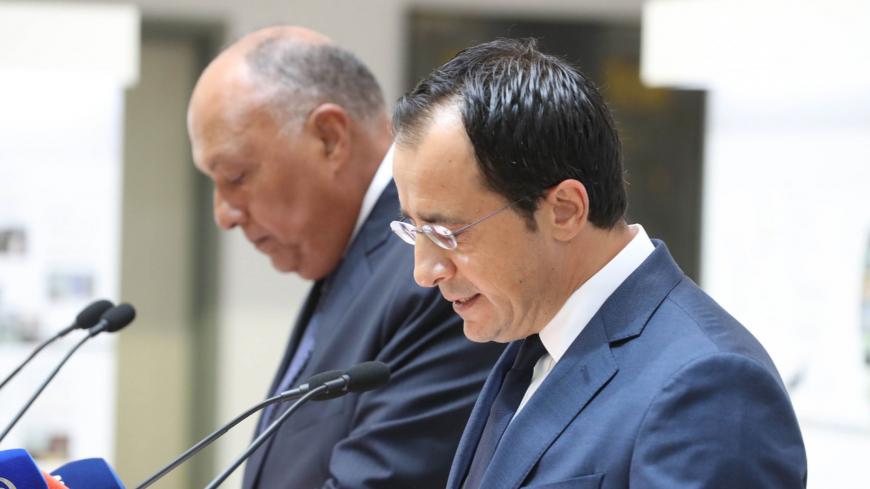 Egyptian Foreign Ministry spokesman Ahmed Hafez stated July 31 that boosting cooperation in all economic fields, particularly in the energy sector, was raised during the talks. He said that Shoukry indicated that the consecutive gas discoveries in the eastern Mediterranean are of major importance in promoting a strong partnership between Egypt and Cyprus.

Shoukry also expressed hope that the Eastern Mediterranean Gas Forum (EMGF), whose second ministerial meeting was held July 25 in Cairo, would serve as another driving force for cooperation and for the coordination of policies between Egypt and Cyprus and other countries in the region.

During the July 25 meeting in Cairo, Egyptian Minister of Petroleum and Mineral Resources Tarek el-Mulla, and his Cypriot, Greek, Israeli, Italian and Palestinian counterparts, as well as the representative of the Jordanian minister of energy and mineral resources, agreed on Cairo as the seat of the EMGF. The forum is designed to boost regional cooperation in the energy sector to exploit the region’s resources and pave the way for a sustainable regional gas market.

On April 11, 2018, Egyptian President Abdel Fattah al-Sisi met with Christodoulides at Al-Ittihadiya palace, in the presence of Shoukry and Cypriot Ambassador to Cairo Charis Moritsis.

According to Al-Masry Al-Youm, spokesman for the Egyptian presidency Bassam Radi said in a statement April 11 that Christodoulides “expressed Cypriot pride in the special cooperation relations with Egypt that reached unprecedented levels in the past few years, and have become the epitome of the constructive cooperation between the Mediterranean countries.”

Furthermore, on April 30, 2018, Sisi hosted a banquet attended by Cypriot President Nicos Anastasiades and Greek President Prokopios Pavlopoulos in the presence of the three first ladies and Greek diaspora.

This came after the three presidents launched the Revive the Roots initiative in the presence of the Greek and Cypriot communities in Egypt. The initiative aims to promote medical tourism between the three countries.

On May 1, Sisi also hosted Anastasiades in the presence of Shoukry, Egyptian intelligence chief Abbas Kamel and Moritsis.

Radi wrote in a May 1 Facebook post that the two presidents discussed ways to boost cooperation at all levels, be it a bilateral cooperation or as part of a tripartite mechanism involving Greece as well. The statement noted that regional and international dossiers of common interest were also on the table.

On Sept. 14, 2018, Shoukry hosted Christodoulides and his Greek counterpart Nicos Kotzias in Cairo, as part of the efforts to promote strong relations, and discussed cooperation projects in the energy sector, following the recent gas discoveries in the Mediterranean.

Speaking to Al-Monitor on condition of anonymity, a government source within the Egyptian Ministry of Foreign Affairs said that the multiple and intensified meetings between senior government officials of the three countries over the past four years underline the extent to which these countries are cooperating and getting closer at the political, economic and military levels.

The source said that the cooperation between Egypt, Cyprus and Greece over the past years culminated with the formation of the EMGF as an economic alliance designed to bring about prosperity to Egypt, as well as Cyprus, particularly following the 2013 Maritime Demarcation Agreement between the two countries.

He noted that the repeated moves bringing Cyprus and Egypt closer affirm the political, military and security coordination between the two sides. He added that the meetings deliver clear messages to Turkey in light of its international law violations via its gas exploration in the Cypriot Exclusive Economic Zone under the Maritime Demarcation Agreement of 2013 with Egypt.

On Oct. 30, 2018, Turkey embarked on drilling for gas in the Mediterranean Sea. The European Union (EU) expressed in a May 4 statement its “grave concern” over the drilling activities and viewed that they consist of a violation of Cypriot sovereignty. EU foreign policy chief Federica Mogherini noted that “the European Union will respond appropriately and in full solidarity with Cyprus.”

Moreover, the US State Department called May 5 on Turkey to halt drilling for gas and oil off the Cyprus coast, stating, “This step is highly provocative and risks raising tensions in the region. We urge Turkish authorities to halt these operations …”

The source recalled that the Egyptian Ministry of Foreign Affairs warned Turkey in a statement May 4, saying that Egypt is following up with great concern and attention the developments regarding the Turkish intention to conduct drilling activities in a maritime zone west of Cyprus.

The ministry’s statement warned against “the repercussions of the unilateral moves on the eastern Mediterranean region’s stability and security, and stressed the need that the regional counties comply with the international law,” Al-Ahram reported.

Zakariya Othman, an expert on international relations in Al-Ahram state newspaper, perceived that Turkey believes the alliance between Egypt, Cyprus and Greece in the eastern Mediterranean is intended to be against Ankara, and noted that Turkey has concerns over this alliance, particularly since these countries formed the EMGF and opted for Cairo as its seat.

He told Al-Monitor over the phone that Turkey views that Cairo managed to form a strong alliance that would obstruct its drilling activities for gas in the eastern Mediterranean, particularly since the alliance’s moves are successful and that it consists of strong components, after other countries such as Israel, Jordan and Italy joined the EMGF under a US umbrella. This was revealed in US Secretary of Energy Rick Perry attending the July 25 meeting in Cairo, he added.

Othman affirmed that cooperation between the three countries reached high military levels, with their armed forces conducting a series of the Medusa joint military exercise, most recently the Medusa 8 exercise that was carried out in the Egyptian Mediterranean waters April 15.