The recent gas discoveries in the eastern Mediterranean Sea have given the concerned countries, mainly Egypt, Turkey and Israel, a new urgency in settling their maritime border disputes. 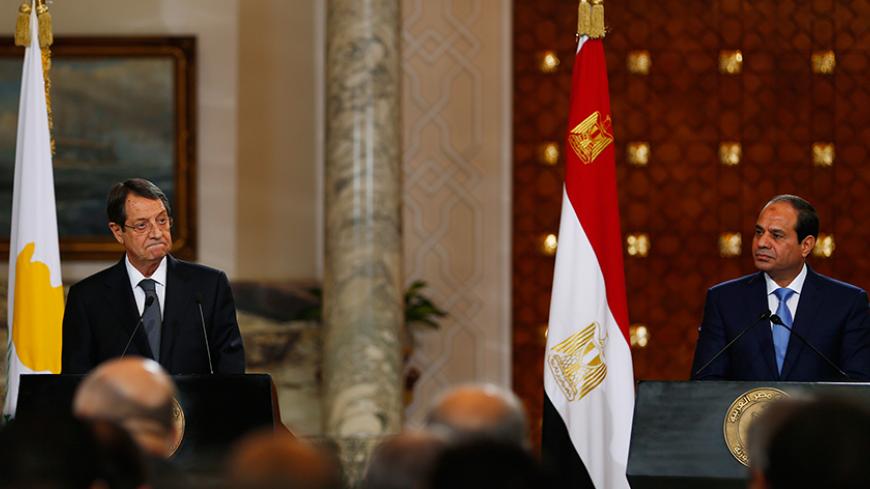 CAIRO — Some observers speculate that gas exploration activities in the Mediterranean will create a new axis of conflict in the region. The conflict over gas reserves in the Mediterranean has pushed Cairo to rush to find solutions to the demarcation of the overlapping maritime border between Egypt, Israel, the Palestinian territories, Lebanon, Syria, Turkey, Greece and Cyprus.

Egypt has established alliances with regional countries sharing its fears about Turkish and Israeli groups seeking to explore gas in the deep waters of the Mediterranean. At a trilateral summit in Cairo on Nov. 8, 2014, Egyptian President Abdel Fattah al-Sisi met with Greek Prime Minister Antonis Samaras and Republic of Cyprus President Nicos Anastasiades.

The meeting resulted in the Cairo Declaration, which outlined key steps for cooperation over gas exploration in the Mediterranean, most importantly the resumption of negotiations (between Egypt and Cyprus and between Egypt and Greece) in the demarcation of the maritime border, and calling upon Turkey to stop all seismic surveys in Cyprus maritime areas.

On Nov. 10, Turkey responded by declaring that naval troops are permitted to apply new rules of engagement in the area.

For its part, Israel relies on a demarcation convention signed with the Republic of Cyprus, an agreement that was rejected by Lebanon, Egypt and Turkey.

The US administration has been working since December 2012 on trying to settle the dispute. According to the US State Department, the United States has been acting as a mediator, and suggested setting the disputes between Lebanon, Israel and Cyprus according to international law and conventions. The agreement would focus on setting the economic maritime border for each state to enable foreign companies to invest in drilling in the eastern Mediterranean without security concerns.

Ibrahim Zahran, the former chairman of Khalda Petroleum Company, told Al-Monitor that tension emerged following the latest gas discoveries. He said, “Israel has six discoveries in the Mediterranean region, most of which fall in the disputed areas between Lebanon and Syria. Cyprus has discoveries in a common basin with Egypt and Israel. Egypt, however, has yet to prove its exclusivity of this discovery. As for the newly found Egyptian field in the Delta and within Egypt’s maritime borders, it has no problems.”

The Italian Company ENI declared in August that it had discovered one of the largest gas fields in the world off the coast of Egypt in the Mediterranean, with reserves estimated at about 30 trillion cubic feet of natural gas, the equivalent of about 5.2 billion barrels of oil.

The eastern Mediterranean contains huge gas reserves, estimated at about 122 trillion cubic feet, according to the US Geological Survey.

The conflict over gas reserves in the Mediterranean portends a future crisis that might escalate into new wars between the Arab states and Israel, according to Hassan Nafaa, a political science professor at Cairo University. He told Al-Monitor that such wars could be sparked by the disagreements over maritime borders between Lebanon and Israel and between Egypt and Israel, as well as disputes between Israel and Palestine.

Egypt is obviously making efforts to head off a potential conflict over gas discoveries in the Mediterranean, according to Yasri al-Ezbawi, a writer and researcher at the Al-Ahram Strategic Center. He told Al-Monitor, “This is why Egypt rushed into forging the Cypriot-Greek alliance, while there is some information that Israel has taken over the gas in the Egyptian region and that off the Gaza Strip coast.”

He added, “Egypt’s step to set the maritime borders with Cyprus is very significant and would deal a painful blow to Tel Aviv.”

Hamed Qarqar, the former deputy president of the energy planning department of the Ministry of Planning, told Al-Monitor, “The border demarcation will not be sufficient to put an end to the conflict over the gas discoveries in the Mediterranean, as the underground gas and oil reservoirs in this area are located at varying depths and [some] reserves span [international borders]. This matter necessitates partnerships and agreements to distribute shares of gas in common reservoirs among more than one country, and to accurately demarcate the borders to prevent any breaches between the concerned states.”

Gamal al-Kaliouby, a professor of petroleum and energy engineering at the American University of Cairo, told Al-Monitor that the gas reserves in the Mediterranean are coveted not only by regional countries, but also by international oil and gas companies. He said that these discoveries will change the energy equation in Central Asia and Europe, as the reserves would meet the needs of nuclear reactors to produce electricity.

“The liquefied natural gas industry is the best way to avoid the dangers of using nuclear reactors in producing electricity, especially in the countries that have already witnessed incidents such as those in Japan and South Korea. This fact will make the eastern Mediterranean one of the most promising areas for gas investment,” Kaliouby added.