Is Turkey the odd man out as Egypt, Greece, Cyprus cozy up? 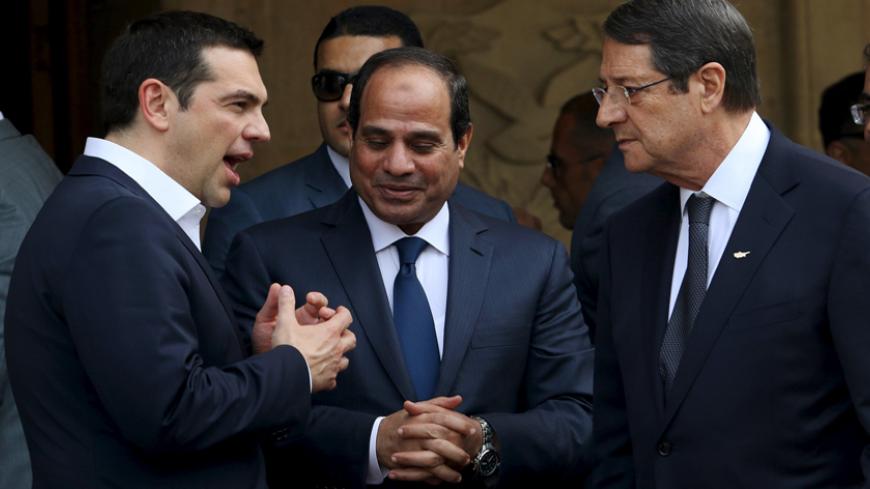 Egypt and Cyprus appear to be taking quick action on decisions they made with Greece during their December summit that addressed issues including the economy, energy and politics.

On Jan. 4, Cypriot Minister of Agriculture Nicos Kouyialis visited Egypt and met with President Abdel Fattah al-Sisi and a number of Egyptian officials, including the ministers of agriculture and environment.

Kouyialis said his visit was to discuss joint cooperation projects to be implemented between Egypt and Cyprus in aquaculture and among Egypt, Greece and Cyprus with regard to land reclamation and the development of new agricultural methods. The Cypriot ambassador in Egypt, Haris Moritsis, also met with Egyptian Minister of Transportation Saad al-Geyoushi on Jan. 14 to discuss cooperation between Egypt and Cyprus in maritime transport.

Egyptian Ambassador Hossam Zaki, who is assistant foreign minister for European affairs, said in a Jan. 17 statement to Egypt’s Al-Youm Al-Sabea newspaper that he is preparing for another meeting this month with officials of the tripartite summit projects.

Cooperation among the countries was the product of the Cairo Declaration, which the three presidents forged during a November 2014 summit. The declaration includes a preliminary agreement among the countries on their visions for political, economic and security cooperation, especially with regard to energy and counterterrorism. Their cooperation is expected to introduce a broader regional dialogue between the Arab world and the European Union.

The pursuit of increased trade exchange between the three countries might not be the only reason for the development of relations. There may be more important common interests that pushed them for developing their cooperation.

The need to create new economic alliances beyond the EU has perhaps become a priority for Greek leaders, especially since the economic crisis has cast a shadow over Greece since 2010. This situation prompted European Commission President Jean-Claude Juncker to threaten to kick Greece out of the eurozone should it fail to comply with the EU’s bailout program. Greece took out numerous EU loans to pay off its debts. The country defaulted on some of its debts and still might stall in paying off some others, most recently a 7 billion euro bridge loan ($7.6 billion) in July.

Economist Farag Abdel Fattah told Al-Monitor such declines may continue, “especially in light of the increasing tensions in the eurozone from 2013 until 2015.”

“Greece is unlikely to return as a hub for EU investors, and the latter are unlikely to attract Greek investors. Therefore, Greece is looking for new partnerships with other countries, including Egypt,” he said.

Following the economic problems of Greece and Cyprus with the EU, both countries developed relations with Russia — Egypt’s most prominent ally, currently. Cypriot President Nicos Anastasiades declared in February 2015 that his country would allow Russia to establish a military base in Cyprus. The two states signed nine military cooperation agreements in the same month.

Athens criticized the EU economic sanctions on Russia for annexing Crimea and ending its affiliation to Ukraine in 2014, as Greek Prime Minister Alexis Tsipras said that sanctions are leading to a dead end. Greece also sought to establish partnerships with Moscow in a number of projects, mostly importantly the Russian Gazprom Turkish Stream gas pipeline.

As is the nature of shifting relationships in the region, these new rapprochements may have much to do with Turkey’s strained relations with both Russia and Egypt, especially since there's an old conflict between Greece, Cyprus and Turkey about gas discoveries in the Mediterranean Sea.

During the Cairo Declaration conference in November 2014, Turkey was warned to stop natural gas exploration in the Mediterranean Sea without a clear demarcation of the maritime borders to protect each state’s discoveries and gas fields.

Turkey responded by commissioning naval forces to engage in the area to protect against any actions toward its projects of oil and gas excavation. This suggested that the gas exploration operations may stir conflict among Egypt, Cyprus, Greece and Turkey. Yasri al-Ezbawi, a researcher at Al-Ahram Center for Political and Strategic Studies, told Al-Monitor at the time that Egypt, as a pre-emptive step, rushed to ally with Cyprus and Greece.