What's behind Egypt meeting with Greece, Cyprus at this time?

The timing of the seventh tripartite summit between Egypt, Cyprus and Greece delivers clear and powerful messages that these countries support each other in the disputes they are facing. 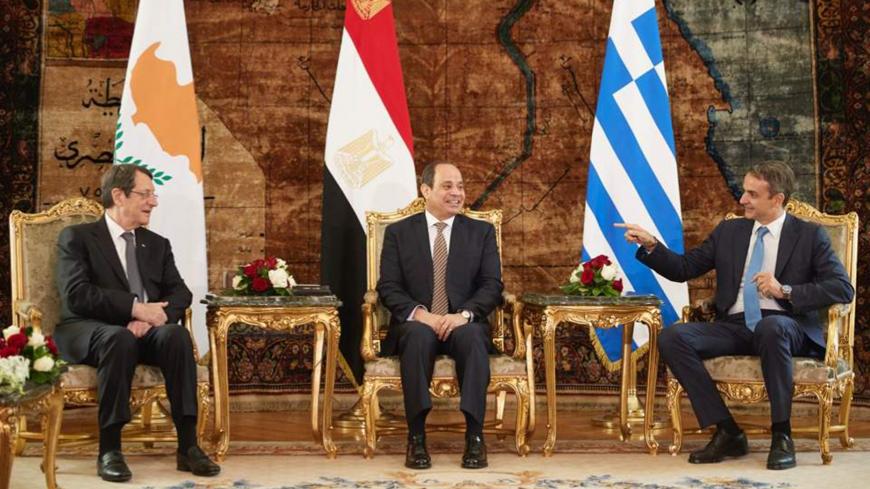 At the press conference on the same day, Sisi stated that the tripartite summit stressed the importance that Egypt, Cyprus and Greece continue to coordinate in the illegal immigration dossier. He added that the summit reiterated its support for the Cypriot government's efforts to achieve development and peace. Sisi welcomed the signing of a number of agreements at the summit, most notably the one for the avoidance of double taxation between Egypt and Cyprus.

Spokesman for the Egyptian presidency Bassam Radi said Oct. 8 that Anastasiades voiced gratitude for the firm Cypriot–Egyptian relations and Cairo’s support for the Cypriot cause. He added that Mitsotakis welcomed the significant advancement of bilateral cooperation over the past years, and Greece’s keenness to further deepen the Egyptian-Greek ties.

The Oct. 8 summit released a joint declaration that the three presidents underlined the importance of making additional efforts to boost security and stability in the Eastern Mediterranean region, and strongly denounce any Turkish attempt to undermine the Syrian territorial integrity. They also expressed willingness to promote cooperation in the fields of natural gas drilling and transportation, and stressed the need for stronger international efforts in combating terrorism and extremism. The declaration stated that the three presidents emphasized that an effective international role to break the deadlock in the talks over the Grand Renaissance Dam is a necessity.

Speaking to Al-Monitor over the phone, Mustapha Kamel Al-Sayyid, professor of political science at the American University of Cairo, said that it is not the first summit between the three leaders, and that such a rapprochement has been underway for a while. He attributed the importance of the summit’s timing “to the need that each country supports the other in the decisive issues facing it.”

Cairo had officially announced that the talks over the Ethiopian Renaissance Dam have come to a dead end, and that Ethiopia rejected the proposals Cairo made to Addis Ababa and Khartoum. This is while Ankara said Oct. 7 that the Turkish drilling vessel Yavuz will start gas drilling activities southwest of Cyprus.

Sayyid noted that Egypt needs to mobilize international support in the talks over the dam, and that Cyprus needs similar support against the Turksih gas drilling activities in the waters that Cyprus considers to be part of its Exclusive Economic Zone.

He added, “I do not think that such support would have a major impact on the [international] decisions relating to the Turkey-Cyprus dispute. Neither do Egypt and Greece have effective means to pressure Turkey, nor are Cyprus and Greece able to pressure Ethiopia in the talks over the dam. Yet at the end of the day it is a kind of political support.”

Egyptian Council for Foreign Affairs member Rakha Hassan told Al-Monitor over the phone that the energy dossier, particularly natural gas, was of utmost importance at the summit. In addition to bilateral trade and investment relations, particularly since Cyprus and Greece are interested in investing in the Suez Canal, and Egypt is interested as well in the advantages Cyprus and Greece can bring to the field of ports management.

He noted that the talks centered on regional issues, such as countering terrorism, the Syrian and Libyan crises and subsequent illegal migration via the Mediterranean Sea, and pointed out that the latter has been a source of concern for the three countries at the summit.

Hassan explained that the summit coincided with the tense talks over the Renaissance Dam and the Turkish-Cypriot crisis. The three countries provide political support for each other, which, however, does not have a major impact on the political decisions that other disputing countries would take.

The Egypt-Cyprus political relations are good, and the two countries’ ministries of foreign affairs signed a protocol on political consultation in 2002, under which three consultation rounds were held, most recently in Cairo in June 2011.

Furthermore, the Egyptian-Greek bilateral relations are good. The two countries’ views converge in general in various regional and international political issues. The joint Egyptian-Greek Medusa military exercises are the most notable activities conducted as part of the armed forces joint exercise. The three countries signed May 22 an electricity interconnection agreement.

On the sidelines of the Egypt, Greece and Cyprus Business Forum held in May 2018 in Alexandria, Minister of Trade and Industry Tarek Kabil indicated that the trade volume in 2017 between Egypt and Cyprus reached 180 million euros ($198.5 million), and 400 million euros ($441 million) with Greece.

Speaking to "Al-Hadath Al-Youm" by phone Oct. 8, Bashir Abdel Fattah, a researcher in Turkish affairs at the Al-Ahram Center for Strategic Studies, said, “The tripartite summit bringing together Egypt, Cyprus and Greece delivers powerful messages to Turkey and derives its importance from its timing, as it coincides with the Turkish threats of conducting drilling activities in the Cypriot regional waters.”

He added, “The summit delivers to Turkey the warning message that carrying on with its international law violations would require the three countries to take a firm stance that the European Union — which already imposed sanctions against Turkey — backs.”