A controversial plan to partially reopen an abandoned resort area in Cyprus’ buffer zone under the administration of the Turkish Republic of Northern Cyprus threatens to further raise tensions within Cypriot communities. 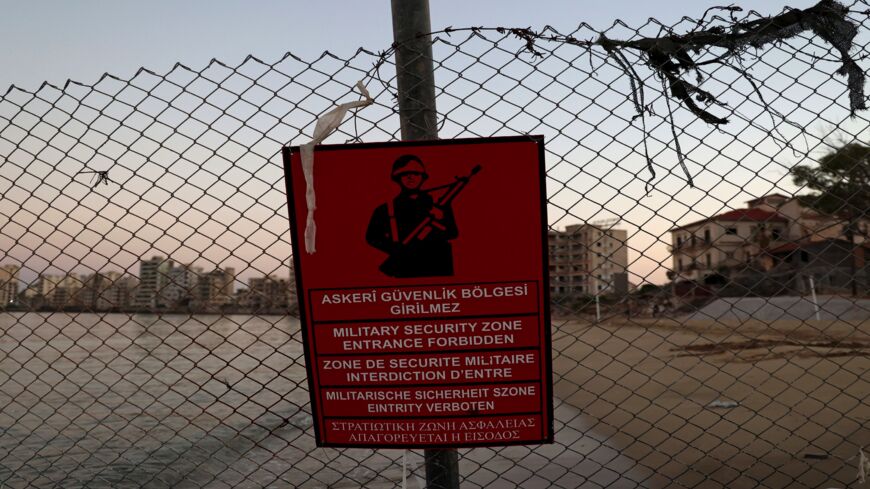 A Turkish army sign is pictured in the fenced-off area of Varosha in Famagusta town in the self-proclaimed Turkish Republic of Northern Cyprus (TRNC) of the divided Mediterranean island of Cyprus, on July 16, 2021. - CHRISTINA ASSI/AFP via Getty Images

ISTANBUL — Stating that Turkey doesn't have "another 50 years to waste" on the Cyprus problem, Turkish President Recep Tayyip Erdogan, flanked by Turkish Republic of Northern Cyprus (TRNC) President Ersin Tatar, in Nicosia Tuesday laid out a series of proposals aimed at bolstering the breakaway state’s sovereignty that would likely raise tensions within Cypriot communities.

On the second day of a two-day visit to mark the anniversary of Turkey’s July 20, 1974, intervention in Cyprus, Erdogan reiterated his support for a two-state solution for the divided island after years of stalled UN-led reunification efforts to foster a bizonal federation.

“The new negotiation process can only be carried out between the two states,” Erdogan said in a joint press event Tuesday. “We are right, and we will defend our right to the end.”

The two leaders then announced controversial plans to further reopen an abandoned resort in Cyprus’ eastern buffer zone under the TRNC administration. Known as "Varosha" in Greek and "Maras" in Turkish, the ghost town was once the island’s top tourism destination but has been fenced off and empty since the 1974 military intervention, which has since left Cyprus divided along ethnic lines.

Varosha was first partially reopened to visitors in October to some backlash from Greek Cypriots who hold property there and condemnation from the Republic of Cyprus administration and other international bodies.

According to the leaders’ statements Tuesday, 3.5% of the resort area will now be reopened and demilitarized, with Erdogan and Tatar inviting Greek Cypriots to reclaim their property through an appeals process with the Immovable Property Commission in the TRNC. Erdogan pitched the plan as an avenue to begin reconciliation efforts in Cyprus, but analysts and members of the international community claim the move could further aggravate intercommunal tensions in the months to come.

“The way Mr. Tatar put it, this is the second phase of a process,” Erol Kaymak, a professor of political science and international relations at Eastern Mediterranean University in Northern Cyprus, told Al-Monitor. “The first phase was to allow for civilians to visit the military zone, and now they’re talking about taking a sliver of that and turning it over to civilian authority.”

Kaymak added, “Apparently, this is a trial balloon … [and] … the next steps will be pending the reaction the Turkish side gets from this action.”

When Varosha was partially reopened in October, the UN Security Council issued a statement reaffirming its previous resolutions continue to apply in the area along with restrictions on resettlement there. The Security Council did not release an immediate reaction Tuesday, though the EU’s foreign policy chief Josep Borrell condemned the move in a statement, underlining “the need to avoid unilateral actions in breach of international law and renewed provocations.”

The Greek Foreign Ministry also denounced the announcement in a statement Tuesday, calling on Turkey to “stop its provocative and infringing conduct.”

Zenonas Tziarras, a researcher at the PRIO Cyprus Centre and co-founder of Geopolitical Cyprus, said the partial reopening of Varosha did not come as a surprise and had been in discussions for years. He said the move reaffirms Turkey’s stance on the Cyprus issue since the collapse of the 2017 Crans-Montana negotiations and provides Ankara with a new bargaining chip in future talks while also strengthening the TRNC’s status as a sovereign territory.

“These new developments have sealed Turkey's shift toward the two-state solution model and deepened the already wide gap between the two sides,” Tziarras told Al-Monitor. “Finding a common ground has become much more difficult and complicated.”

In recent months, Erdogan has reiterated his support for a two-state solution — which is also backed by Tatar — using his visit to oversee a series of groundbreaking ceremonies for construction projects to develop military and transportation infrastructure in the TRNC. On Monday, Erdogan also announced Turkish firms would help construct a presidential palace and new parliamentary complex in Nicosia, bolstering Ankara’s links with North Cyprus.

Such initiatives come as Erdogan repeatedly cited in his visit what he claimed were “insincere” efforts by the Republic of Cyprus government to reach agreements with the TRNC administration in UN-led talks on a bizonal federation, portraying Greek Cypriots as comfortable with the status quo.

"We can see that there are still those who yearn for the massacres before 1974. They are not honest,” Erdogan said Tuesday, in reference to the Republic of Cyprus administration.

Andromachi Sophocleous, a political analyst and consultant in Nicosia, noted all Republic of Cyprus presidents since 1977 were elected on the mandate to pursue a bizonal, bicommunal federation. As the prospect for such a resolution faded in recent years, Sophocleous said Greek Cypriot leaders appear to have lost a sense of their “end goal” in negotiations, creating a void Erdogan has increasingly capitalized to serve Turkish interests.

“[Erdogan] has managed to shift the debate,” Sophocleous told Al-Monitor. “He can openly talk about a two-state solution, and the Republic of Cyprus seems incapable of responding to it decisively and effectively because maybe the government itself is not so clear about what it wants.”

With the push for a two-state solution framework, the partial reopening of Varosha and parallel invitation to Greek Cypriots to reclaim property create additional complications that could divide citizens in the Republic of Cyprus, Sophocleous said.

She added the Republic of Cyprus administration has implicitly stated individuals filing appeals with the Immovable Property Commission would undermine broader political negotiations over the divided island.

“There are UN resolutions that explicitly refer to the return of the fenced-off city of Varosha under UN administration and the return of properties to their legal owners,” Sophocleous told Al-Monitor. “So, for many years, it was thought that no matter what happened, Varosha and the properties would in some way return to the Greek Cypriots.”

Now that these long-held perceptions are being challenged by recent developments, Sophocleous said Greek Cypriots are presented with difficult choices on how to move forward regarding their property claims as they face possible backlash from members of their community if they choose to deviate from their own government’s recommendations.

“Greek Cypriots will be faced with this dilemma over whether they should appeal. It is not an easy decision to make, and we need to appreciate people’s frustrations and people’s emotions,” Sophocleous said, noting some Greek Cypriots are fed up with the lack of political progress regarding the Cyprus issue.