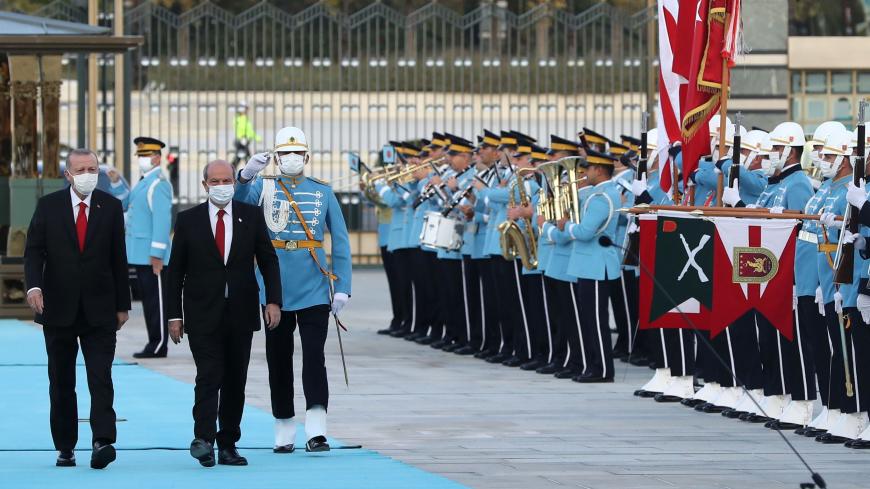 "The Turkish Cypriot people are one of the two nations living on the island," Tatar said Tuesday, adding they have "sovereignty rights from historical treaties and the chance to live in peace, tranquility and security in these lands."

Tatar made the statements after a meeting with UN envoy Jane Holl Lute, who spoke with leaders from both sides of the island Tuesday and said they were willing to participate in an informal five-party summit to explore possible resolutions.

The breakaway TRNC was established after a 1974 Turkish military incursion and remains recognized only by Ankara as sovereign state. The government of the Republic of Cyprus, an EU member state, has long rejected a two-state solution for the ethnically divided island in favor of a bizonal, bicommunal federation.

Yet after the collapse of the most recent reunification talks in 2017 and Tatar’s election victory in October, for which he campaigned on a two-state accord with backing from Ankara, the TRNC leader said Tuesday a new approach was needed to resolve longstanding disagreements over sovereignty and the distribution of energy revenues from offshore gas fields in Cypriot waters.

Turkish President Recep Tayyip Erdogan has backed Tatar’s stance, repeating calls for a two-state solution during a November visit to the TRNC, where he said Cyprus was an island of “two separate peoples and states.”

“A two-state solution must be discussed and negotiated on the basis of sovereign equality,” Erdogan said Nov. 15.

The statements have cast doubts on the resumption of reunification talks, though UN Secretary General Antonio Guterres has said he remains open to hosting an informal conference between the Cypriot governments and the island’s three guarantors, Greece, Turkey and England.

Harry Tzimitras, director of the Peace Research Institute Oslo (PRIO) Cyprus Centre, said Tatar’s approach should not come as a surprise following the nationalist rhetoric of his electoral campaign and close cooperation with Ankara.

“Mr. Tatar is the first leader of the Turkish Cypriot community that is so clearly aligned with Turkey,” Tzimitras told Al-Monitor. “Indeed, he openly campaigned for election as Turkey's man.”

Tzimitras added, “Until now, all previous leaders, even the more hard-liners, informed and to a degree shaped Turkey's Cyprus policy. Now, the reverse seems to be exceedingly the case.”

Assessing the alignment between Ankara and Tatar, Zenonas Tziarras, a researcher at the PRIO Cyprus Centre and co-founder of Geopolitical Cyprus, said the Turkish government is seeking to strengthen the TRNC’s economic autonomy and help its entities gain access to international markets and establish formal diplomatic relations.

Tziarras said a more independent TRNC would be able to leverage its automony to gain more sovereign rights in future negotiations.

“Eventually, Turkey's objective is to control the Turkish-Cypriot constituent,” Tziarras told Al-Monitor, adding that Ankara seeks to devalue “the benefits of any deals or agreements that the two constituent states might make, and thus acquire access to the eastern Mediterranean through the normalization of the status quo's illegality.”

The developments come ahead of the Dec. 10-11 European Council meeting, at which EU leaders will discuss possible sanctions against Ankara for its gas exploration activities in the disputed areas of the eastern Mediterranean Sea.

The outcome of the summit will likely impact future developments in Cyprus, according to Andromachi Sophocleous, a political analyst and consultant in Nicosia, who said Turkish officials appear to be waiting for the council’s conclusions before committing to a meeting with Lute in preparation for a five-party informal conference.

Sophocleous noted that Turkey and the European Union are also likely waiting to see how the incoming US administration will approach the Cyprus issue, highlighting that President-elect Joe Biden and his secretary of state appointee Antony Blinken have both supported a federal solution in the past.

“What has become clear is that the Cyprus problem has left the hands of Cypriots and is now part of the bigger regional and international game,” Sophocleous told Al-Monitor.

Sophocleous added that a two-state solution is “anathema” for majority citizens and political leaders in the Republic of Cyprus. Though northern Cypriots are more likely to support that stance, she said nearly half of TRNC voters cast ballots in October’s elections for former North Cypriot President Mustafa Akinci, who backed a federal solution.

“The truth is that as generations change, and the people who remember a united Cyprus are passing away, the idea of a two-state solution is becoming [stronger] in the minds of people,” Sophocleous told Al-Monitor.

Following her meetings with Cypriot leaders Tuesday, Lute traveled to Greece Wednesday and is expected to hold meetings with Turkish officials later this month.