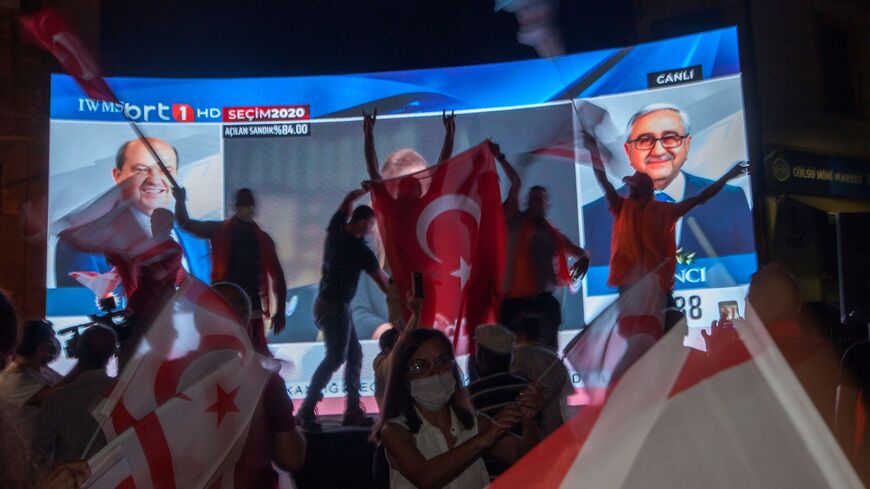 Supporters of right-wing nationalist Ersin Tatar celebrate his win in the presidential election in the northern part of Nicosia, the capital of the self-proclaimed Turkish Republic of Northern Cyprus, on Oct. 18, 2020. - BIROL BEBEK/AFP via Getty Images

ISTANBUL — Turkey-backed hard-liner Ersin Tatar won a presidential election runoff in the Turkish Republic of Northern Cyprus (TRNC) Sunday in a vote widely seen as a referendum on the breakaway state’s policies for years to come.

Tatar, who served as prime minister with the right-wing National Unity Party and fostered close relations with Ankara, beat incumbent President Mustafa Akinci with about 52% of the vote. In his victory speech, Tatar thanked voters as well as Turkish President Recep Tayyip Erdogan, before saying North Cypriots wanted their own state.

In a tweet Sunday evening, Erdogan congratulated Tatar, writing, “Turkey will continue to make all the necessary efforts to defend the rights of the people of northern Cyprus.”

Cyprus has been divided along mostly Greek and Turkish ethnic lines since a 1974 military incursion by Ankara, which keeps about 40,000 Turkish troops in the island’s northern part. The breakaway TRNC is solely recognized by Turkey and reunification efforts with the Republic of Cyprus, a European Union member state, have made little progress since the last round of talks collapsed 2017.

Throughout his tenure, Akinci remained supportive of UN-mediated reunification talks with his Greek Cypriot counterpart Nicos Anastasiades, while Tatar has backed a two-state solution, stating a lack of progress following gas field discoveries in Cypriot territorial waters over the last decade had failed to bring about a revenue-sharing agreement between the two sides, both of which stake claims over the energy reserves.

Speaking Monday, Anastasiades said he expressed his “readiness and determination” to continue negotiations with Tatar. UN Secretary General Antonio Guterres is also expected to call a meeting between the Cypriot leaders to assess the grounds to restart peace talks.

Harry Tzimitras, director of the Peace Research Institute Oslo Cyprus Centre, said Tatar was possibly the first major TRNC presidential candidate to win on a campaign “so closely associated with Turkey and its policies.”

“This reflects the changed nature of current and projected involvement of Turkey in Turkish Cypriot politics and daily lives,” Tzimitras told Al-Monitor.

He added, “A much closer coordination, possibly even a full alignment, between Turkey and the Turkish Cypriot leadership is anticipated.”

Days before the first round of elections on Oct. 11, Tatar visited Erdogan in Ankara, where the pair announced the partial reopening of Varosha, a vacation resort in the Cypriot green zone left abandoned since the 1974 military incursion. Observers said the move, which disrupted peace accords, was likely an attempt to boost Tatar’s appeal among right-leaning voters.

In the first round, Tatar secured about 32% of votes over Akinci’s roughly 30%, setting the stage for a runoff election after neither garnered an outright majority in a contest that saw an all-time low voter turnout at about 58%.

The TRNC, which has a population of 326,000, nearly 200,000 of whom were eligible voters, saw participation rise to about 67% in the second round Sunday. Erol Kaymak, a professor of political science and international relations at Eastern Mediterranean University in Northern Cyprus, said an ”overwhelming majority” of new voters in the runoff election voted for Tatar.

Tatar won over 70% of the vote in the TRNC's Iskele district, which covers the Karpaz Peninsula and is largely populated by “mainlanders” or immigrants from Turkey, Kaymak said.

“The difference in Iskele alone tipped the election in Tatar's favor,” Kaymak told Al-Monitor, adding voters may have grown tired of Akinci’s efforts to promote a federal solution with the Republic of Cyprus.

“Akinci was getting nowhere with Anastasiades,” Kaymak continued. “So it is hardly surprising that in the era of regional tensions, nationalism held sway with a slim majority.”

Observers expect the Tatar administration to now work with Turkey in pursuing an energy-revenue sharing agreement with the Republic of Cyprus. Such a deal had been long set aside as leaders from both sides of the island sought to advance broader reunification efforts before negotiating the distribution of profits from gas fields in Cypriot territorial waters. With the election of Tatar, the status quo between the regional actors is likely to change.

“There is the remote possibility that the now 'unfrozen' conflict will inspire EU leaders and others to prod Greek Cypriots into a more realistic assessment of the situation,” Kaymak told Al-Monitor. “But given Turkey's trajectory it seems we won't find a diplomatic solution to most issues in the near term.”

The new political alignment between the TRNC and Turkey may entrench Turkish Cypriots’ reliance on Ankara, though Fiona Mullen, director of the Nicosia-based research consultancy Sapienta Economics, said there will be “enormous pressure” on all sides to reach some kind of a deal on energy-revenue sharing.

“What I see to be the most likely scenario in the short term is ‘Taiwanisation’ of northern Cyprus,” Mullen told Al-Monitor. “It means de facto recognition as part of some gas deal that might mean either the return of Varosha or at least Varosha remaining closed.”

Mullen said such a development would depend on how relations unfold between the two Cypriot communities in the coming months. Increased contact between both sides could lead to unexpected results, she continued.

“It will either be the slow march to formal partition in the next generation, or it may work as a practice room for eventual reunification,” Mullen told Al-Monitor. “No one thought a united Ireland was possible until very recently, but things happen and suddenly it is now a real possibility.”