The election of Turkey’s favorite candidate in the Turkish Cypriot presidential elections may create more problems than opportunities for Ankara in the eastern Mediterranean. 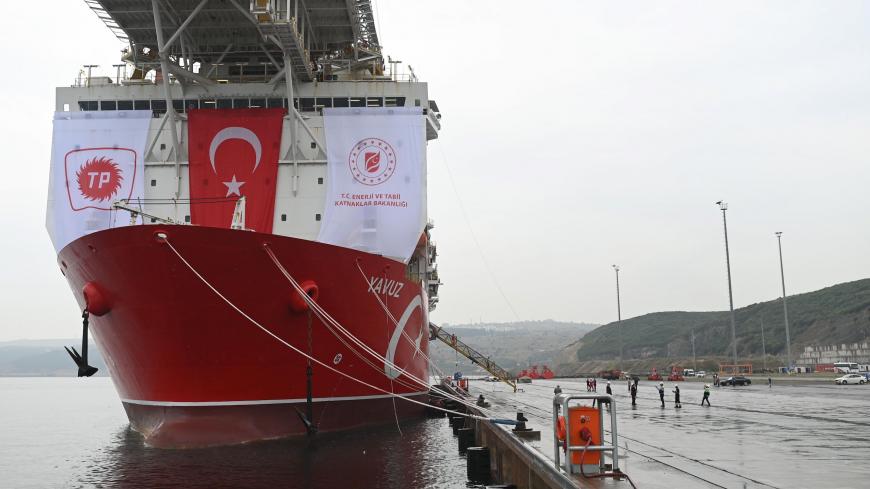 The drilling ship Yavuz, which was scheduled to search for oil and gas off Cyprus, is seen at the Turkish port of Dilovasi, outside Istanbul, on June 20, 2019. - BULENT KILIC/AFP via Getty Images

After getting what he wished for in the Turkish Cypriot presidential polls, Turkish President Recep Tayyip Erdogan should be careful about what comes next in the eastern Mediterranean.

In the second round of the elections Oct. 18, Prime Minister Ersin Tatar won a surprising victory against President Mustafa Akinci. After the first round of the elections Akinci secured the endorsement of the third-place finisher, which theoretically would have put Akinci above 50% in the second round. In a sense, his reelection seemed assured, even if by a small margin.

In anticipation of Akinci’s victory, an independent news website trumpeted “the defeat of neo-Ottomanism in Cyprus” — a clear jab at Erdogan and his Justice and Development Party (AKP). Last month, Akinci had accused the Erdogan government of interfering in the elections, adding further strain to the tumultuous relationship between the two presidents.

Tatar’s victory gave Erdogan and the pro-AKP media a big sigh of relief, but the election result will complicate domestic politics in Turkish Cyprus and the already tough geopolitical and diplomatic situation in the eastern Mediterranean, where Cyprus’ partition since 1974 is a major source of tensions.

Erdogan had advocated for a negotiated settlement and the reunification of Cyprus during his early years in power in the 2000s, hoping to boost Turkey’s EU membership bid. But as the Turkish president became more inward-looking and faced hostility from the EU in recent years, he found himself at odds with Akinci’s desire for a federal solution in Cyprus. Tatar, meanwhile, advocates a “two-state solution” — essentially a permanent division of the island — and clearly enjoys Erdogan’s backing.

The sentiment in Turkish Cyprus seems mixed. Tatar’s supporters are happy but many others are not. One mainland Turk who works in Turkish Cyprus told Al-Monitor that many local folks feel exhausted and defeated after the divisive election campaign.

Days before the polls, Erdogan and Tatar took part in a ceremony to celebrate the repair of the underwater pipelines carrying fresh water from Turkey to Turkish Cyprus. For some, the ceremony looked like a campaign rally for Tatar. On Oct. 8, with Erdogan’s backing, the Turkish Cypriot prime minister reopened the resort town of Maras (Varosha) to further consolidate nationalist votes. Even more controversial was Tatar’s decision to deposit 2,000 Turkish liras’ (about $250) worth of “pandemic social support” to 9,000 Turkish Cypriots right before the election. Tatar’s detractors — even those closely aligned with Turkey — called the move “electoral bribery.”

Greek Cypriots are not too optimistic either. Evangelos Areteos, a roving correspondent for the Cypriot daily Charavgi and nonresident fellow on EU and Turkey affairs at the Diplomatic Academy at the University of Nicosia, told Al-Monitor, “Before the elections, there was cautious optimism and wishful thinking among Greek Cypriots that Akinci would win. The feeling was that there was a huge interference in favor of Tatar. When the results came in, many Greek Cypriot observers joked, ‘Turkish Cypriots voted, but Erdogan won.’ Now, there is a sense among [Greek Cypriots] that they missed their chance for reunification with Akinci.”

Indeed, a big part of Tatar’s electoral appeal stemmed from Greek Cypriot President Nicos Anastasiades’ reluctance to work out a revenue-sharing arrangement over recently discovered natural gas riches before the island could be reunified. Once Tatar assumes the role of chief negotiator as president of Turkish Cyprus, he is expected to deliver on his observation that “there is no federation in the future of the Turkish Republic of Northern Cyprus.” Right now, the only good news is that Tatar and Anastasiades are scheduled to meet soon.

Beyond intra-Cypriot relations, the outcome of the Turkish Cypriot polls could complicate Turkey’s broader geopolitical and diplomatic calculations. Egypt and Israel have begun tapping into vast natural gas deposits off the southern coast of Cyprus and similar deposits are rumored to exist in other parts of the eastern Mediterranean. It was those rumors that led Turkey into a standoff with EU members Greece and France over disputed exclusive economic zones during the summer.

To be sure, Erdogan, Tatar and like-minded Turks (mainland and Cypriot) have a point that Cyprus’ division has left Turkish Cypriots isolated for too long. Still, the Turkish side holds few of the diplomatic trump cards in Cyprus. The Republic of Cyprus has freely used its status as an EU member to maintain a punitive embargo against Turkish Cypriots and create more difficulties in Turkey’s relations with the EU.

But if Erdogan plays his weak hand carefully, he could turn the situation in Turkey’s favor. Istanbul-based geopolitical analyst Yoruk Isik told Al-Monitor, “Tatar’s election will not lead to change in Turkey’s policies over the eastern Mediterranean in the short run. … But if Turkey could capitalize on its recent alignment with Israel over Azerbaijan, events could unfold in Ankara’s favor very quickly.”

For the foreseeable future, Erdogan, Tatar and Anastasiades will be the most consequential leaders in the eastern Mediterranean.