Why Erdogan's so eager to see Cypriot ghost town reopen

The abrupt decision to partially reopen a Cypriot resort sealed off for more than four decades was a clear attempt by Ankara to influence the Turkish Cypriot presidential polls and alter settlement parameters in long-divided Cyprus. 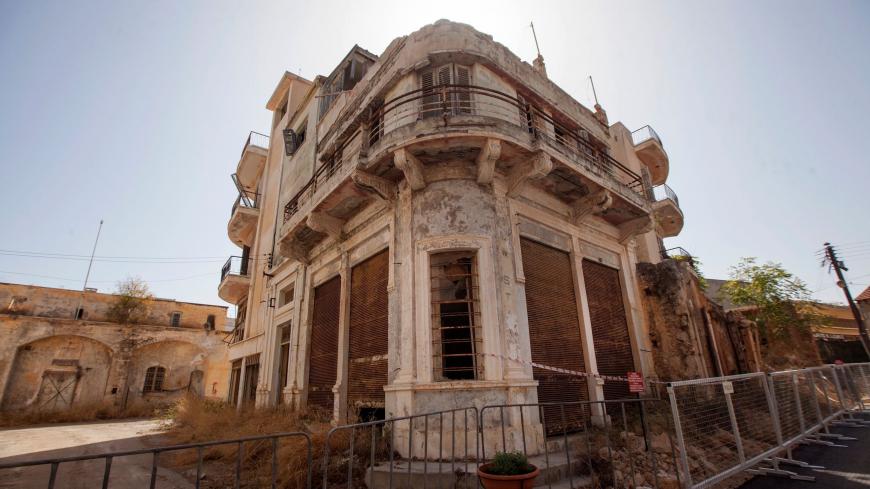 This picture taken on Oct. 8, 2020, shows a view of abandoned buildings along a street in Varosha, in the fenced-off area of Famagusta, in the Turkish-occupied north of the divided eastern Mediterranean island of Cyprus. - BIROL BEBEK/AFP via Getty Images

A political tremor has jolted Turkish Cyprus on the eve of presidential elections as Ankara made an 11th-hour attempt to boost its favorite candidate, but the controversial move could have repercussions beyond Turkish Cypriot politics and impact settlement efforts in long-divided Cyprus. Only Turkey recognizes and props up the Turkish Republic of Northern Cyprus (TRNC).

Prime Minister Ersin Tatar, one of the front-runners in the Oct. 11 polls, was a guest of President Recep Tayyip Erdogan in Ankara Oct. 6. In a clearly timed move, the two leaders announced the resumption of a water pipeline from Turkey to the TRNC after nine months of repairs.

They also made a surprise decision to partially reopen the Cypriot coastal town of Varosha, an off-limits military zone since Turkey’s 1974 intervention that sealed Cyprus’ division after years of ethnic strife. Some beaches and an avenue were reopened to the public two days later.

The decision drew UN and EU protests and sparked a political storm in the TRNC as it lacked parliamentary or cabinet approval. Protests over Turkish intervention in favor of Tatar were already rife and even TRNC President Mustafa Akinci, who is running for reelection, has vocally criticized Ankara.

Though the TRNC is no stranger to Turkish meddling, Sunday’s vote comes at a critical time for Ankara’s regional ambitions. The partition of Cyprus lies at the core of Turkey’s simmering tensions with Greece and the Greek Cypriots over gas exploration rights in the eastern Mediterranean Sea. Varosha has been a key bargaining chip for the Turkish Cypriots in UN-sponsored settlement negotiations over the decades.

Not only did Tatar and Erdogan bypass the decision-making process, but it turned out that not even the Turkish Cypriot president and Tatar’s government partners had been notified. Deputy Prime Minister and Foreign Minister Kudret Ozersay said Tatar kept him in the dark about his visit to Ankara and Ozersay’s party quit the governing coalition in protest.

Serdar Denktas, another presidential candidate, said, “We’ve never faced such nonsense before. Was it worth antagonizing the UN for the sake of a beach?” Tufan Erhurman, the main opposition leader who is also running for election, was even harsher. “Our people are being dragged into serious mistrust, polarization and tensions. We will never allow that. International law must be the basis of any settlement,” he said.

Varosha — once a booming holiday spot frequented by celebrities the likes of Brigitte Bardot and Elizabeth Taylor — has been a ghost town since Turkey’s intervention, which saw the town’s Greek Cypriot residents flee to the south. A 1984 UN Security Council resolution and another in 1992 warned against “inadmissible” attempts to resettle Varosha and called for UN control of the area.

Late Turkish Cypriot leader Rauf Denktas, who had a reputation as a tough negotiator, conditioned Varosha’s partial handover to the Greek Cypriots on the lifting of international restrictions on the TRNC and conveyed the offer in letters to his Greek Cypriot counterpart and the UN secretary-general in 2003. A decade earlier, the UN had proposed that Varosha and the international airport on the Turkish side of the bisected capital Nicosia be reopened to the use of both communities, but Denktas rejected the proposal because it did not involve the lifting of restrictions on the TRNC.

In the landmark 2004 referendum in Cyprus, the UN plan to reunify the island called for Varosha’s handover to the Greek Cypriots. The peace effort failed as 76% of Greek Cypriot voters rejected the plan, while 65% of Turkish Cypriots backed it.

A key aspect of the Varosha issue is the properties that Greek Cypriots left behind. Some 280 people who abandoned properties in Varosha have applied to a commission the TRNC created in 2005 to handle property claims and curb an avalanche of Greek Cypriot petitions to the European Court of Human Rights. About 190 applicants have asked for the return of their properties, while the rest have sought compensation totaling 1.4 billion euros ($1.6 billion).

Though the Turkish Cypriots openly recognize Turkey’s influence, as evidenced by a popular saying that they are governed not by their president or prime minister but by the Turkish ambassador, Ankara’s political meddling has often backfired. In the 2010 and 2015 elections, for instance, Erdogan’s favorites were voted down.

Erdogan’s prime objective this time is to thwart the reelection of Akinci, with whom he has publicly traded barbs in recent years. Earlier this year, Akinci, who favors Cyprus’ reunification in a bi-zonal federation, was called an “enemy” in Turkey’s pro-government media after he said that any prospect of a Crimea-style annexation of Turkish Cyprus would be “horrible” and against Turkey’s own interests. Erdogan is seeking to sway the vote of Turkish settlers, who account for a third of the TRNC population. The community, however, remains divided. Moreover, Erdogan’s interventions have spurred Cypriot nationalism in the right-leaning quarters he is trying to influence.

All in all, the Varosha move could be seen simultaneously as another try to influence the elections and an attempt to alter the parameters in the Cyprus settlement process. Ankara backed the Turkish Cypriot proposals in 1993 and 2003 to cede Varosha to the Greek Cypriots as part of a give-and-take. The new approach, however, involves the goal of fully reopening the area, depending on developments, as evidenced by Erdogan’s remarks that he wished to see all of Varosha reopened. Such a step could revive the dormant peace process, but, alternatively, also mark the prelude to annexation as well.