Days before Northern Cyprus holds elections, Ankara backed the reopening of a ghost town in the island’s green zone in a polarizing move that could influence voter turnout. 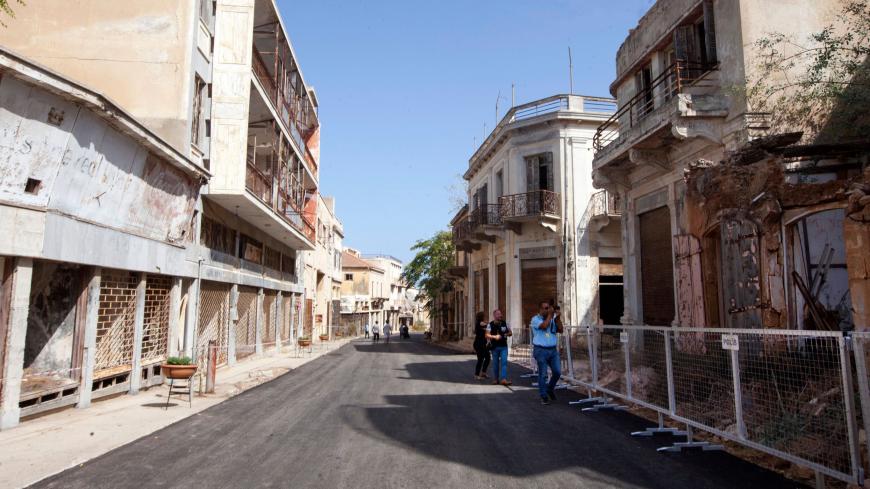 Journalists film as they walk past abandoned buildings along a street in Varosha on Oct. 8, 2020, in the fenced-off area of Famagusta, in the Turkish-occupied north of the divided eastern Mediterranean island of Cyprus. - BIROL BEBEK/AFP via Getty Images

ISTANBUL — Cypriots wandered freely amid ruined hotels and derelict homes Oct. 8 in the abandoned resort of Varosha, also known as Maras, for the first time since the area was sealed off 46 years ago.

Wedged in the island’s prohibited green zone following a 1974 Turkish military incursion that split Cyprus among mostly Greek and Turkish ethnic lines, Varosha has been the subject of reunification talks and property disputes ever since.

Its partial reopening with Ankara’s support touched a nerve among many residents on both sides of the island, raising the stakes for the Oct. 11 presidential election in the Turkish Republic of Northern Cyprus.

“It’s an election stunt,” Andromachi Sophocleous, a political analyst and consultant in Nicosia, Cyprus, told Al-Monitor. “Turkey declared it would open Varosha multiple times in the past, but the timing caught many people off guard.”

During a visit to Turkey's capital, Ankara, on Oct. 6, Northern Cyprus Prime Minister Ersin Tatar — who is running for president — made the surprise announcement on the opening of Varosha’s beachfront alongside Turkish President Recep Tayyip Erdogan. Turkey is the sole nation to recognize the sovereignty of Northern Cyprus.

“We hope that Maras will be fully opened for use,” Erdogan said. “We are ready to provide every support to the [Turkish Cypriot] authorities in this regard.”

The move was quickly condemned by the international community, with the spokesperson for UN Secretary-General Antonio Guterres releasing a statement Oct. 6 urging regional leaders to “avoid any unilateral actions that could trigger tensions on the island and undermine the return to dialogue” or future reunification talks.

The UN Security Council planned to hold closed-door discussions on the reopening of Varosha on Oct. 8.

The decision drew opposition from within Northern Cyprus’ ruling coalition, which saw the People’s Party withdraw from the government Oct. 6 after the surprise announcement. Deputy Prime Minister Kudret Ozersay of the People’s Party had campaigned for the reopening of Varosha, but pulled his support after he was reportedly not consulted on the developments.

Erol Kaymak, a professor of political science and international relations at Eastern Mediterranean University in Northern Cyprus, said the goal has long been to bring Varosha under the Turkish-backed government's jurisdiction. But he said “this requires some delicate diplomacy” to convince both the European Court of Human Rights that the move provides a domestic remedy to property owners, such as Greek Cypriots, and to stay on good terms with the UN secretary-general.

As head of the right-wing National Unity Party, Tatar fosters close ties with Ankara in contrast with his leading opponent in the upcoming election, incumbent President Mustafa Akinci. Akinci has criticized Turkey’s foreign policy in the past.

“The concern among more liberal-minded Turkish Cypriots is that Erdogan wants to install the subservient Tatar to rubber-stamp everything,” Kaymak told Al-Monitor, saying the surprise announcement might be “designed to swing the election in favor of Tatar.”

Recent polls suggest a tight race for the Oct. 11 election, which was originally scheduled for April 26 but delayed in response to the COVID-19 pandemic. Due to a large pool of candidates, observers expect no candidate to receive a majority and for there to be an Oct. 18 runoff.

The reopening of Varosha could cause the vote to be decided on candidates' stances regarding negotiation efforts. Akinci remains committed to the UN framework for talks while Tatar supports a two-state settlement.

Bloomberg reported Oct. 6 that the government of the UN-recognized Republic of Cyprus told European Union diplomats that Turkey’s plans on Varosha would create a “fait accompli” that would make attempts to reach a Cyprus settlement “utterly unattainable.” Sophocleous said that because future peace talks are at stake, the polarizing issue will likely increase voter turnout. She also said Ankara’s support for Tatar may backfire.

“It’s a double-edged sword for Erdogan ... because he thinks he’s using [Varosha] as an election standpoint for Tatar but at the same time, he’s hitting Turkish Cypriots in their open wound, which is the extent of their dependence on Turkey,” Sophocleous said.

Sophocleous also noted that only the coastal area in Varosha was reopened to visitors Oct. 8 and that no further steps had been outlined, leaving the door open for ongoing negotiations under the UN framework. She said the lack of progress on negotiations since the most recent attempts failed in 2017 could lead to new problems down the road.

“I think we’re in for many more similar crises in absence of a Cyprus problem solution and I hope all players are able to understand this at the moment,” Sophocleous said. “This is why the elections on Sunday … are so important.”