Amid ongoing Turkey-Greece tensions in the eastern Mediterranean, US officials maintained the partial lifting of an arms embargo on Cyprus aims to reduce Russian influence and is not a step against Ankara’s recent maneuvers in the region. 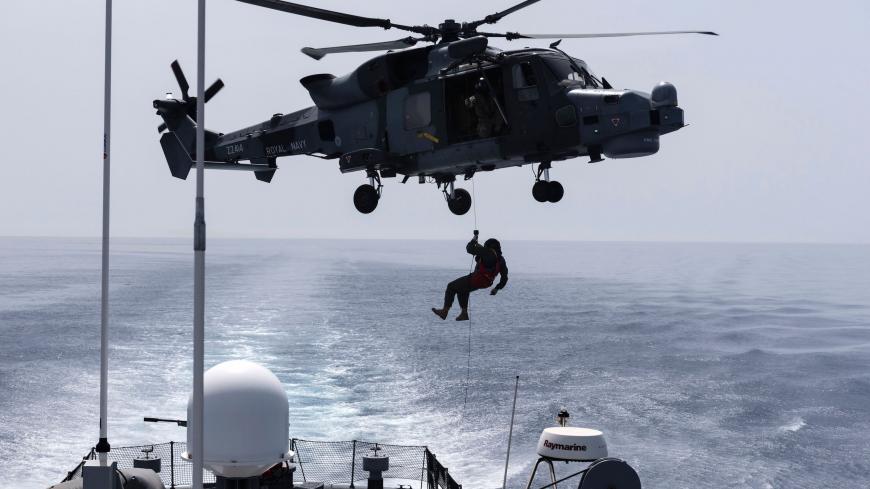 A picture taken from Cyprus' warship Ioannides shows a Royal Navy Lynx helicopter taking part in the Multinational CIMIC Exercise, ARGONAUT 2019, Search and Rescue (SAR) Operations, a rescue drill in which the militaries of Cyprus, Greece, France, Britain, Israel, Germany and the United States participated on May 30, 2019, off the coast of Mari between the southern ports of Larnaca and Limassol in the eastern Mediterranean island of Cyprus. - IAKOVOS HATZISTAVROU/AFP via Getty Images

ISTANBUL — As the Turkey-Greece row on overlapping territorial claims in the eastern Mediterranean continues, regional tensions were further aggravated when the United States announced the partial lifting of an arms embargo on the Republic of Cyprus Tuesday.

US Secretary of State Mike Pompeo announced Washington would deepen security cooperation with Cyprus in a tweet Tuesday, stating the United States would waive restrictions on non-lethal weapon sales to the nation for the coming year.

The announcement comes at a volatile time for the region, where Turkish and Greek navy vessels have been shadowing one another as Ankara continues its gas exploration activities through Sept. 12 in disputed waters between the two nations.

The Turkish Ministry of Foreign Affairs condemned the move in a statement Tuesday, saying the move “poisons” peace and stability in the eastern Mediterranean, and that Ankara would take unilateral actions if the United States did not reconsider the decision. Meanwhile, the Greek Foreign Ministry welcomed the announcement.

Some politicians and observers, within Ankara and beyond, viewed the lifting of the arms embargo as a step against recent Turkish actions to extend its maritime boundaries following stalled negotiations with Greek leaders, who sunk prospects for a speedy resolution by signing an Aug. 6 territorial agreement with Egypt.

Yet US Ambassador to Cyprus Judith Garber said the announcement was not related to Turkey during a press event Wednesday and was instead aimed at reducing Russian influence in the region.

“Some will ask if we are taking this [decision] in response to the most recent developments in the region; the answer is no,” Garber said Wednesday.

She added, “This determination, which has been in process for months, is a consequence of a growing security partnership with Cyprus and our assessment of the eastern Mediterranean as a region of growing strategic importance in an era of great power competition.”

Garber said through such policy moves, the United States was continuing its calls on Cyprus to implement anti-money-laundering regulations and take steps toward denying “Russian military vessels access to ports for refueling and servicing,” though it waived an outright ban on such actions.

Washington implemented the Cyprus arms embargo in 1987 to encourage reunification talks and deter an arms race on the island, which has been divided along Turkish-Greek ethnic lines since a Turkish military incursion in 1974. Between 35,000 to 40,000 Turkish troops remain stationed in the Turkish Republic of Northern Cyprus (TRNC), which is solely recognized by Ankara.

Andromachi Sophocleous, political analyst and consultant in Nicosia, said the partial lifting of the arms embargo was being “hyped up” by actors on all sides, as it strictly permits non-lethal weapons such as Tasers, helmets and anti-riot gear for security forces.

She added the measure was part of the 2019 Eastern Mediterranean Security and Energy Partnership Act, which authorizes the United States to provide Cyprus and Greece security assistance and enhance cooperation on regional gas development.

“Most Cypriot analysts are only focusing on this as a message to Turkey,” Sophocleous told Al-Monitor. “But the United States has been trying to give Cyprus something in order to pressure it to reduce its cozy relation with Russia.”

In July, under the partnership act, the United States expanded its military education and training programs to include Cyprus. With the latest development, the lifting of the arms embargo will be valid for one year and can be renewed on a yearly basis.

Still, the news was not received well by politicians in Ankara as well as Turkish Cypriot President Mustafa Akinci, who spearheaded failed reunification talks in 2017 and is running for reelection next month on a platform to continue negotiation efforts with Cyprus.

“The decision will not encourage the Greek side for an extensive resolution and will not serve peace,” Akinci told Garber following the announcement.

“This is sending [Greek Cypriot leaders] a signal that ‘it’s okay if you continue to be unconstructive; we’re behind you,’” Unluhisarcikli told Al-Monitor. “I’m not sure this is the right message to give.”

“That recent events were not taken into consideration in determining the timing is telling in itself,” Unluhisarcikli told Al-Monitor. “Even if the timing was set independent from current events … it could have been postponed. I don’t buy that argument.”

Speaking during a press briefing Wednesday, Pompeo urged “everyone to stand down” amid regional tensions, saying US President Donald Trump has been trying to mitigate Turkey-Greece discord by speaking with leaders in both nations. When asked about the arms embargo, Pompeo said it was a “long time coming.”

“We know that this decision was announced in light of heightened tensions in the eastern Mediterranean, but we thought it was the right thing,” Pompeo said.

Situated in the buffer zone between north and south Cyprus, Varosha has been a ghost town since the 1974 Turkish military incursion, and it’s reopening under TRNC jurisdiction could complicate reunification talks.

“The opening of Varosha would put a tombstone on the prospect of a Cyprus problem solution,” Sophocleous told Al-Monitor.

Unluhisarcikli said Turkish leaders had been keeping Varosha, also known as Maras, closed as a gesture of goodwill and as a bargaining chip that would be handed over to the Greek Cypriots once a successful resolution was reached, but recent events may prompt Ankara to reconsider its options.

“As the prospect of a diplomatic solution and a resolution on the island is waning, Turkey is basically signaling, ‘If you go in that direction, I will also assume there is no negotiated settlement and take further actions.’”