The Turkish government and the Turkish Cypriot president have a row in advance of the Oct. 11 presidential election in the Turkish Republic of Northern Cyprus as tensions have been rising in the eastern Mediterranean; the president has not always been in line with Ankara. 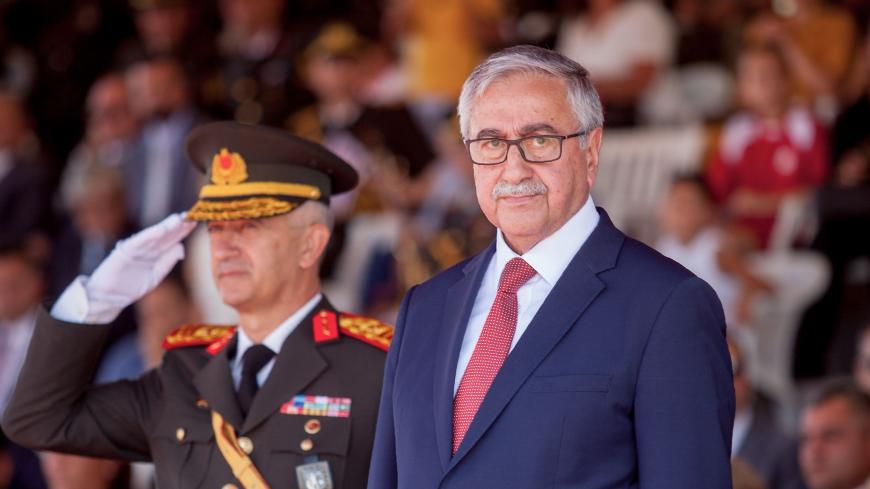 President Mustafa Akinci attends a military parade in the northern part of Nicosia, the capital of the self-proclaimed Turkish Republic of Northern Cyprus, on July 20, 2019, to mark the 45th anniversary of the Turkish invasion of northern Cyprus in 1974. Akinci faces an apparently tough re-election vote in a crowded field Oct. 11. - BIROL BEBEK/AFP via Getty Images

You would expect Turks of different backgrounds and viewpoints to close ranks while tensions still run high between Turkey, Greece and France over the oil and gas riches of the eastern Mediterranean. Not so for the government of Turkey and President Mustafa Akinci of the Turkish Republic of Northern Cyprus.

In an interview with the news outlet Euronews on Sept. 8, Akinci argued that “outsiders” (hinting at the Turkish government) are intervening in the Turkish Cypriot presidential elections that will be held Oct. 11. Akinci said, “When the military insurgency happened on July 15 [2016], we supported the civilian administration in Turkey; we did so out of respect for the democracy, civil administration [and] the people of Turkey and their will. Now, we expect the same respect for the Turkish Cypriot democracy and the decision of our people. We expect nobody to make the mistake of taking sides during the election. I am saying that because there is evidence.”

In the rest of the interview, Akinci struck a conciliatory tone in his comments on the resolution of the Cyprus conflict and Turkey’s disputes with the European Union (especially Greece and France) over the eastern Mediterranean. He asked for the relationship between Turkey and Northern Cyprus to change from the traditional rhetoric of “the motherland looking after the babyland” toward one where Northern Cyprus acts and is treated as a state capable of determining its own future.

Akinci’s remarks met with a harsh reaction from the pro-government press in Turkey. Yeni Safak newspaper ran the headline “A Raider for Greeks”— suggesting the Northern Cyprus president is a sell-out to Greek Cypriots (the “Akinci” were fast-charging Ottoman cavalry units that conducted incursions into Europe centuries ago). The Sabah newspaper called Akinci’s claims about the intervention in Northern Cyprus' elections “an ugly smear.” The independent news outlet T24, meanwhile, followed up with Akinci and gave him an opportunity to elaborate on his points.

This is not the first time that Ankara and Akinci have moved apart. In February, the Turkish Cypriot president warned that “the prospect of a Crimea-style annexation” of Cyprus by Turkey would be “horrible,” which is a factual and logical statement. Turkish Foreign Minister Mevlut Cavusoglu, in response, said Akinci was “not an honest politician.”

In a series of street interviews with the BBC in February, many Turkish Cypriots supported their president and called upon their fellow Turks from the mainland to respect their desire to resolve the Cyprus dispute on their own terms. Following the recent row, several Turkish and Turkish Cypriot supporters of Akinci who spoke with Al-Monitor on condition of anonymity underlined his image as a “democrat, progressive and secular leader.” Several pointed out Akinci’s pragmatic approach to issues affecting the two communities in Cyprus — especially in solving water and sewage problems during his tenure as the mayor of the Turkish side of the capital, Nicosia, in tandem with his Greek Cypriot counterparts.

The charged atmosphere between Ankara and Akinci lies in the critical geopolitics and the emotional history of Cyprus. Although the eastern Mediterranean island is small (one-third the size of Belgium and two-thirds the size of Connecticut), it has produced epic geopolitical drama in modern times.

Upon gaining independence from Britain under the so-called London-Zurich Accords of 1959, the Republic of Cyprus succumbed to ethnic strife between the Greek majority and Turkish minority. The colonels’ junta in Greece attempted a coup in 1974 to unify the island with the Hellenic homeland. After the Turkish military intervention that summer, the ill-fated Greek Cypriot coup and the colonels’ regime in Athens collapsed. Since then, despite successive attempts at reunification — including a UN-backed plan that was put to popular referendum in 2004 — Cyprus remains divided between the Turkish Republic of Northern Cyprus, which only Turkey recognizes, and the Greek Cypriot-dominated Republic of Cyprus (an EU member), which Turkey refuses to recognize.

Of course, the dispute works for both Turkish leaders and Akinci. Not only has election interference become standard operating procedure in international affairs, it also serves a cudgel that competing political factions use against each other before elections or to explain away their poor campaigning. The more level-headed critics of Akinci in Turkey and Northern Cyprus who spoke with Al-Monitor on condition of anonymity said he was using Turkey’s deteriorating image for his own benefit. Common criticisms involved Akinci allegedly playing a “dangerous game” by sowing divisions among Turkish Cypriots over those who are “for” or “against” Turkey. For them, Akinci is covering up his inability to deliver a workable peace plan and blaming Ankara for it.

A lingering problem underlying Turkey-Northern Cyprus relations is the unequal nature of the relationship. Both Turkish officials and mainland folks — be they just visiting Northern Cyprus or settling there — approach Turkish Cypriots with an overbearing, condescending and arrogant attitude that can be summed up as “we saved you from the Greek Cypriots in 1974.”

Owing to their historical illiteracy, most mainland Turks fail to appreciate that Turkish Cypriots’ resistance against injustice in the 1950s, 1960s and the early 1970s meant there was a land and a people for the Turkish military to save in 1974. Imagine what the ongoing crisis in the eastern Mediterranean would have looked like had Turkish Cypriots ever thrown in the towel and let Cyprus unite with Greece.

As the recent row between Ankara and Akinci shows, much of that emotionally charged history is still with us. But in the 2000s and early 2010s, Greeks and Turks — both mainland and Cypriot — aided by a smarter and more impartial approach from other EU countries (which is sorely lacking these days), made overtures that would have been unthinkable before. Whoever wins in Northern Cyprus on Oct. 11, one hopes that the acrimonious language from the Turkish side ends, smart diplomacy prevails and the winds of peace return to the eastern Mediterranean.