Turkish President Recep Tayyip Erdogan announced Ankara would help construct a presidential palace and new parliament building in the Turkish Republic of Northern Cyprus during a high-level visit to the breakaway state Monday. 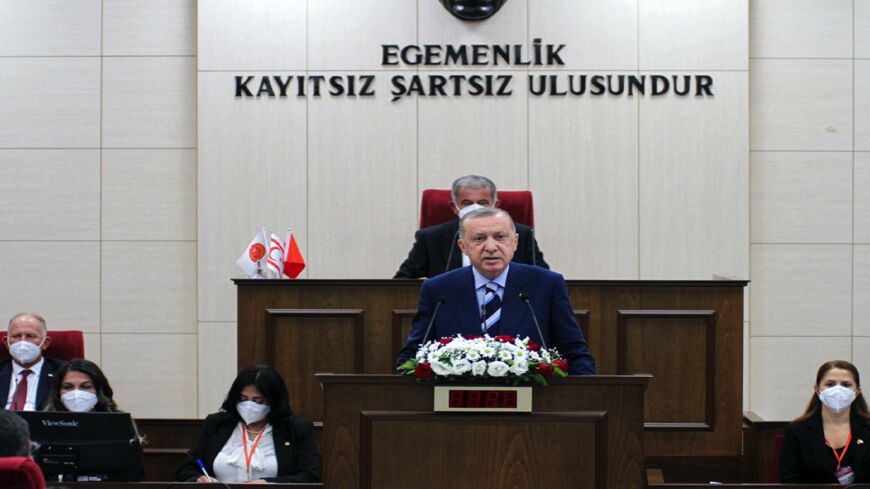 A handout picture published by the parliament of the self-proclaimed Turkish Republic of Northern Cyprus (TRNC) shows Turkish President Recep Tayyip Erdogan speaking at the parliament, in the northern part of Cyprus' divided capital, Nicosia, on July 19, 2021. - AFP via Getty Images

ISTANBUL — Turkish President Recep Tayyip Erdogan landed in Northern Cyprus Monday, kicking off a two-day visit to mark the anniversary of Turkey’s 1974 intervention on the island, where he reiterated support for a two-state solution amid long-stalled UN-led reunification talks.

Addressing the parliament of the Turkish Republic of Northern Cyprus (TRNC), Erdogan Monday unveiled what he had earlier referred to as “good news,” announcing Ankara would help build a presidential palace and new parliament building in the TRNC, for which he said construction would begin shortly.

“This is the expression of statehood,” Erdogan said Monday, referring to the construction of the TRNC presidential palace. “By realizing this project, some will see what kind of a Northern Cypriot state exists."

Erdogan also announced a large park, or “national garden,” would be constructed in Nicosia’s Metehan district, which would include the new parliamentary complex.

The visit comes after the latest attempt to restart UN-led peace talks between the Greek and Turkish Cypriot governments stalled this spring in Geneva. Cyprus has remained divided along ethnic lines since Turkey launched a 1974 intervention following a military coup backed by Greece.

Diplomatic attempts to resolve disagreements between the Republic of Cyprus and the TRNC have largely failed to make progress since the collapse of 2017 negotiations in Crans-Montana, Switzerland. After years of unsuccessful efforts to resume talks, right-wing nationalist Ersin Tatar was elected TRNC president in 2020 on pledges to drop reunification talks and pursue a two-state solution with Ankara’s backing.

Before departing Monday, Erdogan reiterated Turkish Cypriots would achieve lasting and sustainable sovereignty only through a two-state solution in absence of renewed talks for a two-zone federation. Officials in the Republic of Cyprus, an EU member state, refuse to discuss the two-state solution as it would require recognizing the TRNC as a state.

“A solution in Cyprus can be achieved only on the basis of the facts in the island,” Erdogan said Monday. “If there is to be a fresh negotiation process in the future, this can be realized only between two sovereign and equal states.”

During his visit, Erdogan is expected to inaugurate several construction projects with Tatar before observing ceremonies marking the 47th anniversary of Turkey’s intervention Tuesday, July 20.

Fiona Mullen, director of Nicosia-based Sapienta Economics, a research consultancy, said the Turkish government is convinced Greek Cypriots will never want to share power with Turkish Cypriots, and in response has pursued its own agenda in supporting the TRNC government.

“After Crans-Montana, [Turkey] clearly took a decision to make the status quo as painful as possible for the Greek Cypriots and the EU,” Mullen told Al-Monitor. “The Greek Cypriots still have no real plan about what to do about this. Every time they say no, they lose more territory.”

Mullen added the TRNC leadership likely welcomes local development projects but noted there was a growing sense of unease among businesses that have traditionally backed Tatar’s National Unity Party over “a loss of control, which seems to have accelerated in the past few months.”

“More and more projects are handled directly by ministries in Turkey and are awarded to companies from Turkey,” Mullen told Al-Monitor. “That isn’t so good for the guys who historically benefited from Turkish patronage.”

Prior to Erdogan’s visit, speculation circulated over the possibility Azerbaijan might establish a diplomatic mission in the TRNC or recognize the breakaway state, becoming the second state to do so after Turkey, following a visit by Azerbaijani officials last week.

Harry Tzimitras, director of the Peace Research Institute Oslo (PRIO) Cyprus Centre, said such a move was unlikely in the short term. He said more likely developments in the coming months would center on Turkish-backed construction projects, including two military bases in the TRNC, one of which serves as an airstrip for Turkish drones.

“Cyprus has reacquired for [Erdogan] a strategic importance … he’s proceeding with a plan to use Cyprus as a strategic pawn in a broader chess map that he’s drawing in the region,” Tzimitras told Al-Monitor.

In 2019, Ankara began sending Turkish drillships to conduct offshore hydrocarbon prospecting activities near Cyprus in what Turkish officials claimed was a move to protect the territorial and natural resource rights of Turkey and Turkish Cypriots. The prospecting activities ended following pressure from Western allied nations and the imposition of EU sanctions on Turkey.

“The agenda [Erdogan] is following in Cyprus is to a very large extent informed by his wish to deliver to the [Turkish] nationalist audience for domestic political purposes,” Tzimitras told Al-Monitor.