Talks to reunite Cyprus have again failed to unblock a four-year pause in negotiations over the future of the Eastern Mediterranean island. 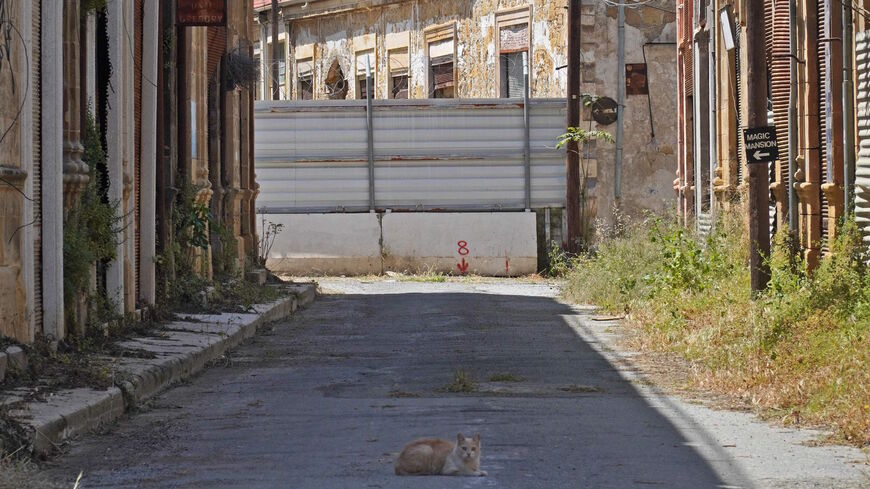 A cat is pictured inside the buffer zone that separates the internationally recognized Republic of Cyprus and the breakaway Turkish Republic of Northern Cyprus in the divided capital Nicosia, on April 26, 2021. - ROY ISSA/AFP via Getty Images

The latest attempt to lay the ground for the resumption of talks to reunite Cyprus failed after a three-day summit, UN Secretary-General Antonio Guterres told a news conference in Geneva Thursday. Greek and Turkish Cypriot leaders had gathered with the foreign ministers of Turkey, Greece and the United Kingdom to unblock a four-year pause in negotiations over the future of the Eastern Mediterranean island. It has been divided since 1974, when Turkish forces invaded the northern third of the island to torpedo a Greek Cypriot attempt to annex it to Greece and created the Turkish Republic of Northern Cyprus, solely recognized by Ankara.

“The truth is that at the end of our efforts, we have not yet found enough common ground to allow for the resumption of formal negotiations,” Guterres said. The UN would try again in “probably two to three months,” he added.

The outcome was widely predicted. Turkey and its protege, Ersin Tatar, a hawk who was recently elected president of the breakaway republic, raised the stakes at the outset. Citing the failure of decades of UN-brokered talks and the Greek Cypriot leadership’s refusal to grant Turkish Cypriots equal status in a federal state advocated by the UN, Turkish President Recep Tayyip Erdogan and Tatar insist that a fully sovereign Turkish Cypriot state loosely associated with the internationally recognized government of Cyprus is the most viable solution for both communities.

Tatar opined that official negotiations on the future of Cyprus were “meaningless” without the recognition of sovereign equality of both sides, and that the Turkish Cypriots would not accept minority status in Greek Cypriot-ruled federation. The talks could only resume if the Greek Cypriots agreed to these terms.

Turkish Foreign Minister Mevlut Cavusoglu said Turkey would continue to support a “two-state solution” and accused Cypriot President Nicos Anastasiades of failing to bring “a new vision” to the table.

Anastasiades warned in turn that if the Turkish side persisted in its demands to “create new faits accompli,” his government would pull out of the talks.

The increasingly hawkish stance embraced by Turkey and the Turkish Cypriots is seen by many as more of an attempt to pressure the Greek Cypriots to cede more ground. It could backfire.

Zenonas Tziarras, a researcher and geopolitical analyst at the Nicosia-based PRIO Cyprus Center said, “There is a vast gap between the positions that cannot be bridged soon.” The Turkish side’s demands for a partnership between the Turkish Cypriots and the Republic of Cyprus on equal terms “goes against all UN Security Council resolutions and inter-communal convergences on the conflict. This, right now, cannot be accepted by the Greek Cypriot side, no matter the applied pressure.”

“What can happen in the future,” Tziarras predicted, “is the adoption of an incremental approach that would not necessarily need UN mediation — though it would benefit from it — to resolve various issues of the conflict outside of a comprehensive settlement framework of either two states or a federation.” Points of contention include ports, airports, the environment and natural resources, notably water. He continued, “This will de facto create a confederal function, minus international recognition for the Turkish Cypriots — unless certain states decide otherwise."

Tziarras warned, however, that without a comprehensive settlement as the ultimate goal, “such an approach would run the risk of consolidating division in the medium term by removing incentives for a united state in which Greek Cypriots and Turkish Cypriots would need to cooperate at the highest level.” Worse, it may suit the European Union, which granted Cyprus full membership in 2004 after a UN-backed referendum on a plan to unite the island for which the Turkish side voted in favor but the Greek Cypriots roundly rejected. The EU “would welcome any progress in Cyprus that would de-escalate tensions with Turkey,” he said.

It would be a crushing result for most Turkish Cypriots, who live in diplomatic and economic isolation, unable to fly in and out of the Turkish-controlled third of the island without touching down on Turkish soil first and deprived of the benefits of EU membership enjoyed by the Greeks. It would also spell continued dependency on an overweening Turkish state, which under Erdogan has begun to meddle in the secular character of the Turkish Cypriots.

He lashed out against a court ruling that brought restrictions to mushrooming Quran courses in northern Cyprus, saying, “They should quickly correct this mistake, otherwise our next steps will different.” Erdogan did not specify what those steps might be. His words triggered an angry backlash. Veteran Turkish Cypriot politician Mehmet Ali Talat said Erdogan’s comments vindicated Greek Cypriot claims that the Turkish Cypriot administration was “a fake puppet state.”