Former Nicosia Mayor Nicosia Mustafa Akinci, if elected president of the Turkish Republic of Northern Cyprus, could open the way to peace on the divided island. 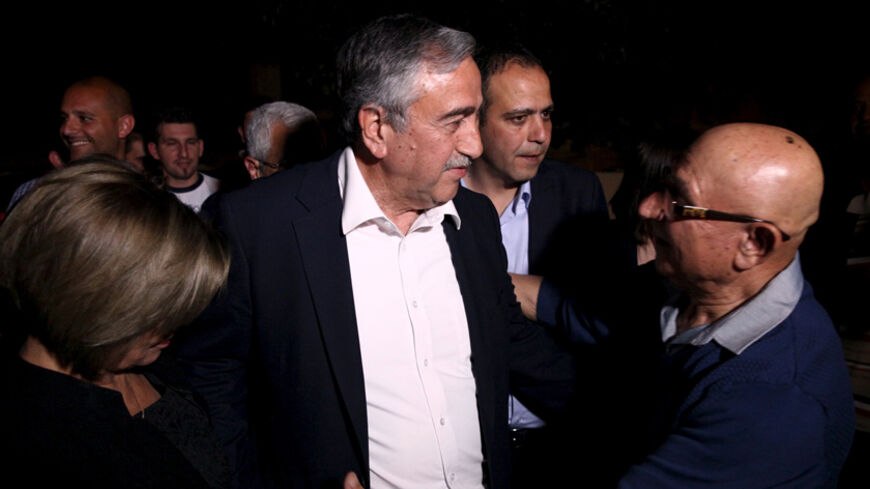 A supporter greets Turkish Cypriot politician Mustafa Akinci after the first round of the presidential election in Nicosia, April 19, 2015. - REUTERS/Yiannis Kourtoglou

NICOSIA, Cyprus — Walking around the Old City on the Turkish side, one is struck by the age of the buildings. A Turkish bath and a cathedral-turned-mosque are centuries old. A caravanserai of ochre-brown stone blocks has been lovingly restored to a quadrangle of restaurants and craft shops.

Then one looks down a side street and finds it blocked by a barrier of sheet metal, topped by barbed wire. It bears a red sign with a black silhouette of an armed soldier and says, "military zone, entry prohibited." Peeking over the barrier, one sees dilapidated buildings that nobody has entered for 40 years and a road overgrown with weeds.

It is a reminder of Cyprus’ bloody past; the 1960s and '70s when Turkish and Greek Cypriots killed each other. It is also an indictment of the present. Germans tore down their wall 25 years ago, but Cypriots have learned to live with their division.

In a bid to shake them out of this complacency, the UN has announced the resumption of negotiations between Greek and Turkish Cypriots next month. And on April 26, Turkish Cypriots are poised to elect a leader whose record as mayor of Turkish Nicosia in 1976-90 makes him their best chance of reaching a settlement.

Mustafa Akinci finished second in the first round April 19, taking 26.9% of the vote, but he will almost certainly win the runoff April 26. He is the pro-settlement candidate in an election dominated by the question of how to negotiate with the Greek Cypriots. His opponent, Dervis Eroglu, the “president” of the self-declared Turkish Republic of Northern Cyprus, has been so tough in negotiations that Greek Cypriots see him as a wall.

Eroglu repeatedly warned voters that his three main challengers — Akinci, parliament Speaker Sibel Siber and chief settlement negotiator Kudret Ozersay — would concede too much to Greek Cypriots. He got 28.2%.

Ahmet Sozen, professor of politics at the Eastern Mediterranean University, told Al-Monitor that voters sent the message they want a new approach.

Siber’s camp endorsed Akinci this week and many Ozersay supporters are expected to vote for him as well.

Two things distinguished Akinci from the other candidates. First, “he has stood up against Turkey many times,” as Cemaliya Ilkman said after casting her vote April 19.

Turkey’s domination of the north is widely resented among Turkish Cypriots. Ankara stations 30,000 troops in the north and pays the salaries of Turkish Cypriot civil servants. But it has enabled tens of thousands of mainlanders to settle in Cyprus. And, Turkish companies rule the economy.

Ilkman, a law student, recalled the occasion in 2000 when a Turkish general made a patronizing remark about Turkish Cypriot governance at a ceremony in Nicosia. Akinci, then deputy prime minister, walked out. “Eroglu [then prime minister] was present, but he didn’t take any action,” Ilkman said.

Speaking after his first-round success, Akinci said, “I want a more brotherly relationship [with Turkey], rather than a mother-daughter relationship. I want to see Turkish Cypriots standing on their own feet firmly.”

No Turkish Cypriot has spoken so explicitly before of the need to upgrade Nicosia’s relations with Ankara.

Akinci’s second distinction is that he has pledged to return Varosha to its owners, the Greek Cypriots. Varosha is the once-affluent suburb of Famagusta that has been occupied by the Turkish army since Turkey invaded Cyprus in 1974 after a coup by advocates of unification with Greece.

Eroglu and the other candidates said they would return Varosha to the Greek side as part of a comprehensive settlement. But Akinci would return it as a confidence-building measure to pave the way to a settlement.

“Let Varosha become a lovely city where people live, contractors from both communities do business together and young people can find jobs,” Akinci said in his campaign.

Nobody has taken such a bold step in the 40 years since the invasion. If Akinci tears down the barbed wire around Varosha, he will effectively be challenging his Greek counterpart, Cypriot President Nicos Anastasiades, to make an equivalent move.

On the Greek Cypriot side of the island, political scientist Hubert Faustmann of Nicosia University said Anastasiades could respond by allowing international flights to land at Ercan International Airport.

Ercan is the only working airport in Nicosia, but it is in the Turkish zone. It can receive flights only from Turkey, the sole country to recognize Northern Cyprus. There has been talk of allowing world airlines to fly to Ercan if it is under UN control and if passports are stamped “Republic of Cyprus” — so as not to jeopardize the sovereignty of the Anastasiades government.

“The opening of Varosha and Ercan would trigger huge dynamics,” Faustmann told Al-Monitor. “Ankara has said the moment Ercan is opened, it will open Turkish ports and airports to Greek Cypriot vessels and planes, and that in turn takes away the reason for the EU and Greece blocking chapters of Turkey’s EU accession negotiations."

Faustmann added, “You would have a domino effect that could lead to a solution of the Cyprus problem."

Greek Cypriots are pleased by Akinci’s success, but many would say that even if he becomes “president” it will not make a big difference. “Ankara calls the shots,” is the refrain on the Greek side of the demarcation line.

Sozen insists the Turkish Cypriot leader does have clout. “If somebody tells me there is no difference between Mr. Akinci and Mr. Eroglu, then I have nothing to say,” Sozen told Al-Monitor.

“As mayor of Turkish Nicosia, Akinci managed to co-operate with the Greek Cypriot mayor on the sewerage system and the Nicosia master plan — despite the opposition of [then-Turkish Cypriot President Rauf] Denktash. Of course the stance taken by the leader of the Turkish Cypriots makes a difference.”