Cypriots watched the negotiations in Geneva with skepticism. While their leaders did not agree, they did focus on the hardest nut to crack, security, and they agreed to work further on it. 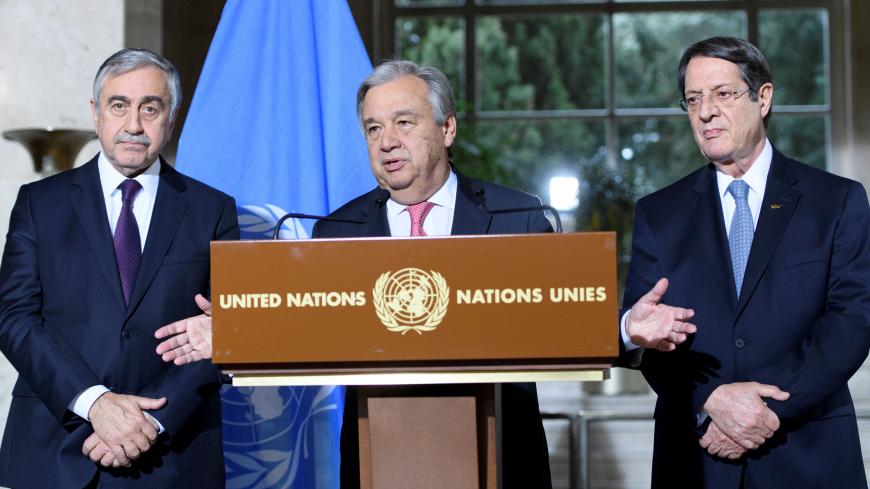 UN Secretary-General Antonio Guterres (C) speaks next to Turkish Cypriot leader Mustafa Akinci (L) and Greek Cypriot President Nicos Anastasiades (R) during a press conference after the Conference on Cyprus, on the sidelines of the Cyprus Peace Talks, at the European headquarters of the United Nations in Geneva, Jan. 12, 2017. - REUTERS/Laurent Gillieron

NICOSIA, Cyprus — Whenever I go to Cyprus, I like to go to Paphos Gate, a gap in the massive Venetian walls that encapsulates the island’s condition. On the one side, the flags of Cyprus and Greece flutter in the wind above an old concrete pillbox that looks as if it were built for a World War II film. On the other side are the flagpoles of Turkey and Turkish Cyprus, but their “flags” are rigid — they are made of metal. They stand behind a fence topped with barbed wire and in front of a Turkish army pillbox.

In between these symbols of hostility, cars and pedestrians pass through the gate. Yes, Cyprus has been divided into two armed camps since the Turkish invasion of 1974 but, like the traffic through Paphos Gate, life goes on.

While walking to the gate Jan. 13, I met an old journalist friend who has lived in Cyprus for years. “Nothing’s changed,” he told me with a bemused shrug of his shoulders.

But when I got to the gate, I saw things had changed. The pillboxes are empty. In the 1980s, I used to see Turkish Cypriot soldiers walking along the Venetian wall behind the fence. There would be Greek Cypriot troops watching them from the pillbox opposite and, at a fork in the road just inside the gate, Swedish UN troops watching both sides.

On Jan. 13, there was no soldier of any color to be seen.

But my friend was right in that the Greek and Turkish Cypriot leaders had just finished four days of negotiations in Geneva and had not reached a settlement.

The two sides agreed to set up a working group to thrash out their differences on security and the Treaty of Guarantee — a 1960 independence agreement that allows for Turkey, Greece and Britain to intervene unilaterally on the island if they think the status quo has been jeopardized.

The group will begin meeting Jan. 18.

For the first time, the two leaders — Nikos Anastasiades of Greek Cyprus, whose government is the only one recognized by the world, and Mustafa Akinci of Turkish Cyprus, whose breakaway state is recognized only by Turkey — exchanged maps on the boundaries of the constituent states of the envisaged Federation of Cyprus.

Since the 1974 invasion, Turkish Cypriots, who are roughly 25% of the population, have enjoyed 36% of the island. By the newly drawn maps, Anastasiades would cut this to 28.2% and Akinci would reduce it to 29.2%. In other words, the two sides are within 1% of agreement on territory.

Anastasiades rightly called this a “milestone.”

Another first at Geneva was that Greek Cypriots found themselves across the negotiating table from Turkey. Greek Cypriots have always said that Turkey calls the shots in north Cyprus, as it defends and finances the Turkish Cypriot administration.

But Anastasiades’ sitting across the table from Turkish Foreign Minister Mevlut Cavusoglu was not enough to reach a deal. A fact that is little appreciated among Greek Cypriots is that Ankara cannot push Turkish Cypriots to go further than they want to go. If Akinci were to accuse Ankara of selling out Turkish Cypriots, that would create serious problems for Turkish President Recep Tayyip Erdogan at home.

“They don’t want a solution,” said the Turkish Cypriot technician who connected me for a satellite broadcast with France 24 TV after the Geneva conference ended. “Everybody wants what they want,” he said.

On the other side of the Green Line, as the demarcation line is known, Christos Agathokleous kindly offered me a lift in his car.

“Turkey is doing a big extortion against us,” he said of Geneva. He was pessimistic about a solution. “It’s not Turkish Cypriots’ fault. Turkey is using them.”

Skepticism about reunification is widely shared in Cyprus. Turkish Cypriot academic Mete Hatay says that through his work for Peace Research Institute Oslo he has observed that “most people want a settlement but just don’t see how it can happen. The Cyprus conflict is a pretty comfortable one, and in this ‘cold peace,’ people just aren’t hurting enough to make the necessary compromises.”

The hardest nut to crack in the negotiations is the issue of security. From December 1963 through the Turkish invasion of 1974, a lot of people were kidnapped and murdered or massacred by fanatics on both sides. A rough rule of thumb is that until the invasion, the Turkish Cypriots suffered most of the atrocities. During the invasion, the Greek Cypriots got the worst of it.

“Turkish Cypriots are not scared of all Greek Cypriots, just some Greek Cypriots,” said Simon Bahceli, a former journalist who now runs a cafe in Turkish Nicosia. “And the one thing the Greek Cypriot fanatics fear is the Turkish army.”

Bahceli referred to the occasional incidents of Greek Cypriots throwing stones at Turkish Cypriot cars that cross the Green Line, and beating up Turkish Cypriots. He told Al-Monitor, “The [Greek Cypriot] government condemns these attacks, but they never find the attackers and prosecute them. And it’s easy to find people in Cyprus.”

He added, “Nobody is ever brought to justice, and that does worry Turkish Cypriots.”

I read these quotes to George Koumoullis, a Greek Cypriot economist and columnist for the Cyprus Mail newspaper.

“I’m ashamed to say this is true,” he said over lunch in a restaurant in Greek Nicosia’s Ledra Street. Koumoullis said the thugs who attack Turkish Cypriots belong to the establishment, “and the establishment wants to make sure that nobody is prosecuted.”

Another person interviewed in Ledra Street, Andri Petridou, agreed that such incidents worked against a settlement, but said there were fanatics on the Turkish side as well.

“If both sides are to go further [toward a settlement], we have to punish the fanatics,” she said.

On the final day of the Geneva talks, Greek Foreign Minister Nikos Kotzias said the main stumbling block was Turkey’s “insistence” on keeping troops on the island and the right to intervene, as conferred by the Treaty of Guarantee.

Koumoullis thought that if the two sides could agree on, say, 10,000 Turkish troops remaining after a settlement for 10 years, that Greek Cypriots would accept that in a referendum. But, he stressed, there would have to be a cast-iron guarantee that at the end of 10 years, the troops would be withdrawn because “Greek Cypriots do not trust Turkey.”

Petridou said she would vote for such a settlement, and the popular vote is key. In 2004, the Turkish Cypriots voted heavily in favor of the Annan Plan settlement, but Greek Cypriots rejected it.

Hubert Faustmann, a professor of politics at the University of Nicosia (on the Greek side), thought Koumoullis’ idea was feasible, but he had one reservation. He told Al-Monitor, “I very much doubt that you can give such a cast-iron guarantee because who is going to kick Turkey out?”

It is this kind of problem that the working group that starts Jan. 18 will have to resolve.