Turkey disgruntled by US support for Greece, Cyprus, Israel summit 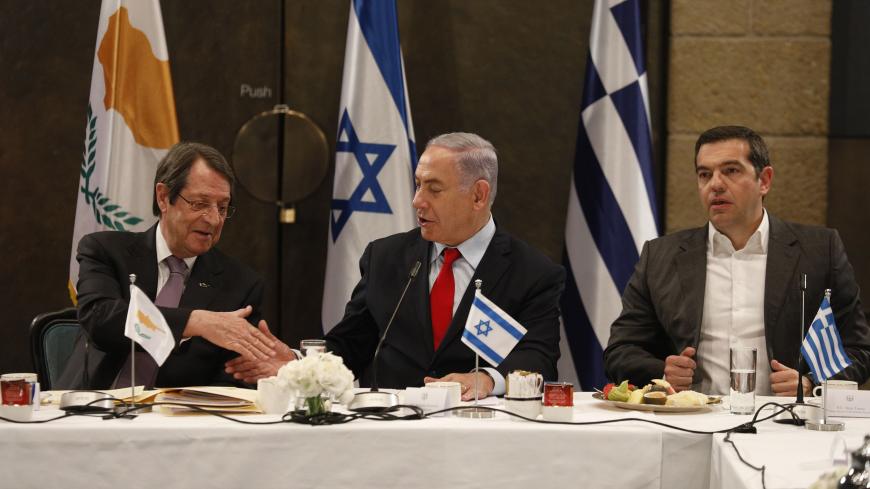 US Secretary of State Mike Pompeo’s attendance at the sixth summit meeting between Israel, Greece and Cyprus in Jerusalem on March 20 has added a new and troubling dimension to the already tense ties between Ankara and Washington. Turkish officials construed the Jerusalem summit as an anti-Turkish gathering and are displeased with Washington's support for Turkey’s principal rivals in the eastern Mediterranean.

The Greek daily To Vima summed up what the leaders would not say openly when it wrote that “the summit sent a strong message to Ankara regarding energy security and its hostile behaviour in the eastern Mediterranean.”

The Israeli media carried similar assessments, which were also colored by the increasing tension between Turkey and Israel over developments in the Gaza Strip and now the issue of Israel’s annexation of the Golan Heights.

Turkey’s rivalry with these three countries has gained added significance with the discovery of vast natural gas reserves in the region in recent years, which Ankara is also keen to exploit. Ankara believes that Greece, Cyprus and Israel aim to prevent Turkey from accessing these reserves, which it says it has a right to under international law, and has vowed to respond militarily if necessary.

In addition, Turkey disputes the validity of the Exclusive Economic Zone Cyprus has declared around the island. It argues that the Greek Cypriot administration cannot do this as long as the Cyprus problem remains unsolved, because this is an encroachment on the rights of the Turkish Cypriots in the north of the divided island.

To show Ankara’s determination, Turkish warships prevented the Cyprus contracted Italian oil giant Eni in February 2018 from sending a deepwater drilling rig to one of the disputed lots off the southern coast of the island.

The Jerusalem summit also came a few weeks after Turkey held its largest navy drill ever, which started on Feb. 27 and lasted four days, covering the Black Sea, the Aegean and the eastern Mediterranean.

Can Kasapoglu, an analyst for the Istanbul based Center for Economics and Foreign Policy, pointed to the significance of the drill’s code name of “Blue Homeland,” which he said was not merely the name of an exercise. “It is also a geopolitical concept that manifests Ankara’s political-military agenda in the coming decade,” he wrote in an article for the semi-official Anadolu Agency. “This understanding adopts a more active role for the Turkish navy in energy, geopolitics competition, coercive efforts and naval diplomacy,” he added.

The emphasis at the Jerusalem summit was on the EastMed pipeline project, which aims to connect Israel, Cyprus and Greece and carry natural gas from the region to Europe.

Before Turkey’s ties with Israel soured there was much talk about sending Israeli gas to Europe via a pipeline to be connected to Turkey's existing network of pipelines. This was considered to be the only viable and economic route available.

Hope also emerged after the discovery of vast offshore gas reserves by Cyprus that this would expedite a solution to the Cyprus problem, following which Cypriot gas could also be sent to Europe via Turkey.

The EastMed project, however, clearly aims to circumvent Turkey and has merely added to Ankara’s sense of encirclement by hostile powers that is supported by the United States.

Serdar Turgut, who reports for daily Haberturk, wrote from Washington that the EastMed project had been selected “merely to oppose Turkey, even if it will be more expensive and risky than a pipeline project that goes over Turkey.” Pointing to Pompeo’s support for this project, Turgut underlined that “the meeting in Israel showed that [Turkey] is up against a very strong bloc.”

All of this comes at a time when Ankara’s ties with Washington are heading for a fresh crisis over unresolved military issues that are also set to weaken Turkey’s position in NATO.

The main issue currently centers on Washington’s objections to Ankara’s purchase of Russian-made S-400 anti missile systems and its threats to withhold the delivery of F-35 fighter jets to Turkey if the deal goes ahead.

America’s alliance with the Kurdish People's Protection Units in Syria, which Turkey sees as a terrorist group that poses a threat to its security, is also fueling negative Turkish perceptions about Washington’s regional ambitions.

Retired Brig. Gen. Naim Baburoglu summed up the feeling in Ankara when he wrote that Washington “is pursuing policies in Syria and the eastern Mediterranean that fall counter to Turkey’s national interests.” In his column for the news portal Gercek Gundem he underlined his expectation that “the energy war and the struggle for influence in the eastern Mediterranean will continue with increased intensity in 2019.”

Retired Ambassador Selim Kuneralp, however, thinks it is unlikely that Turkey can engage in military action to secure its interests in the region given the countries that are involved. “Turkey says it has rights in the eastern Mediterranean under international law. Therefore it should take the matter to the International Court of Justice. The only other option — given that it will find it hard to fire a single shot — is to issue hollow threats,” Kuneralp told Al-Monitor.

In his opening address at the Jerusalem summit, Israeli Prime Minister Benjamin Netanyahu referred to what he said had “blossomed into one of the best regional associations in the world,” underlining that Pompeo’s presence proved Washington’s supports for this effort.

Similar sentiments were expressed by Anastasiades and Tsipras who both underlined the growing importance of Washington’s support for the cooperation between Greece, Cyprus and Israel on energy and security issues.

It was Pompeo's remarks, however, and the joint declaration issued after the summit, that rankled Ankara. “Revisionist powers like Iran and Russia and China are all trying to take major footholds in the East and in the West, and we view the United States and Israel and the Republic of Cyprus and Greece as great, key partners in security and prosperity,” Pompeo said.

The joint declaration after the Jerusalem summit was also considered to be hostile to Turkey, even if it was not named in any way.

“The leaders agreed to increase regional cooperation; to support energy independence and security; and to defend against external malign influences in the eastern Mediterranean and the broader Middle East,” the declaration said.

Believing that the reference to “malign influences” includes Turkey, veteran political commentator Yalcin Dogan argued that “a diplomatic statement could not be anymore hostile than this.”

In his column for the news portal T24, Dogan went on to list the embedded messages to Turkey from Jerusalem as follows: "You may be a regional actor but you are not the boss; you are not behaving in a well-intentioned manner; in the event of an undesirable situation we are determined to struggle against you; and, in addition to these, America stands with us economically and politically.”

Aware of his country’s need to get along with Turkey for a host of pragmatic reasons, Greece tried, after the Jerusalem gathering, to mollify Turkey by sending its foreign minister straight to Turkey.

During his press conference with his Turkish counterpart Mevlut Cavusoglu, Foreign Minister Giorgos Katrougalos said Greece was aware that Turkey had certain rights regarding energy resources in the eastern Mediterranean based on international maritime law.

He said that his country wanted to promote a positive agenda with Turkey based on respect for international law and the de-escalation of tensions in the region by implementing measures designed to build mutual trust.

These remarks appear to have mollified Ankara for the moment. However, with the solution to the Cyprus problem nowhere in sight, with the temperature in Turkish-Israeli ties rising again and with latent tensions between Greece and Turkey that can surface at any moment, analysts expect the eastern Mediterranean to remain potential flashpoint for the foreseeable future.

They also expect this to have negative results for Turkish-American ties, which are already beset by a host of problems that are unlikely to be resolved anytime soon.