Turkey Adds Fuel to Fight Of Iraqi Kurds for Independence

Despite Turkey’s age-old fear of Kurdish independence in contiguous regions near its border, energy ties are growing between Turkey and Iraq's Kurdistan Region. 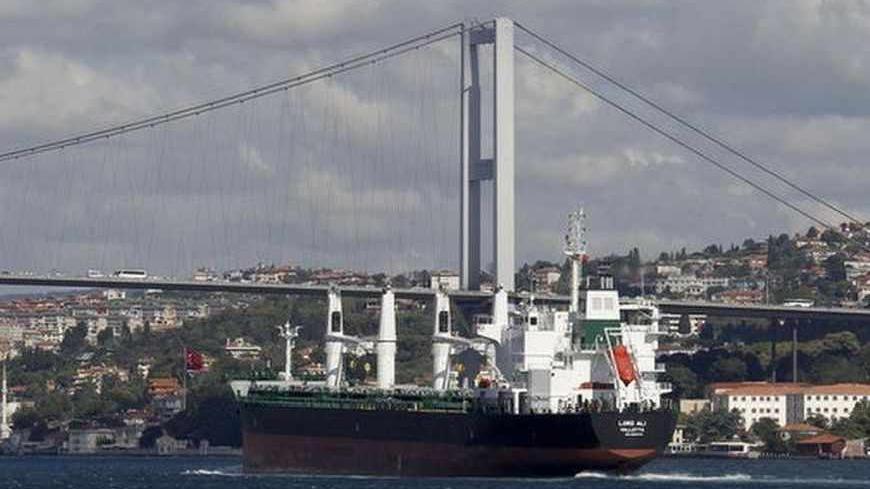 An oil tanker passes through the Bosphorus to the Black Sea in Istanbul, Sept. 1, 2012. - REUTERS/Osman Orsal

The capture of the Syrian town of Ras al-Ain near the Turkish border by the Kurdish Democratic Union Party (PYD) from al-Qaeda-linked Islamist groups has activated Ankara’s Kurdish phobia once again, given the close ties between the PYD and the Kurdistan Workers Party (PKK), which has been waging a campaign of terror in Turkey for autonomy.

Turkey’s age-old fear is that any political advances toward autonomy or independence by the Kurds in contiguous regions near its border will also encourage separatism among its own restive Kurds. Turkish-Kurdish relations, however, are proving to be more complex than meets the eye. Ankara’s fears about Kurdish political ambitions has not prevented the growing energy ties between Turkey and the Kurdistan Regional Government (KRG), even if this cooperation could be paving the way to independence for Iraqi Kurds.

Baghdad and Erbil, the capital of Iraqi Kurdistan, remain at odds over how to share Iraqi oil and gas revenues despite recent friendly overtures between KRG President Massoud Barzani and Iraqi Prime Minister Nouri al-Maliki. These overtures peaked with the visit by Maliki to Erbil on June 9 and the return visit to Baghdad by Barzani on July 7.

It was agreed during these contacts to form a series of joint committees to study the sources of disagreement between the sides on territorial, energy and budgetary issues and provide advice on how solve them. Results are still coming, but few on either side are bracing themselves for any major breakthroughs. Meanwhile, the KRG continues to push its independent plans for its oil reserves unabated.

KRG Natural Resources Minister Ashti Hawrami said in recent an interview, reported on by Al-Monitor on July 7, that estimated crude-oil reserves in Northern Iraq, excluding reserves in areas in the region whose ownership is disputed with Baghdad, stand at 45 billion barrels “and possibly even more.” He added that preliminary estimates for natural-gas reserves stood at between 100 or 200 trillion cubic meters.

With such reserves, Northern Iraq can not only finance itself as an independent entity, with good prospects for international recognition, but also stands to be one of the richest regions of the Middle East. Not surprisingly, Baghdad continues to reject the independent deals Erbil has signed with international oil companies, including Turkish companies, calling them illegal under the constitution.

Erbil, for its part, accuses Baghdad of withholding the KRG’s fair share of the country’s oil revenues, and argues that its agreements with international companies are legal under its current status in the constitution. The argument rages on with no apparent end in sight, despite the recent pleasantries between the sides. Meanwhile, Washington continues to pressure Erbil and Ankara to work with Baghdad on energy issues in order not to endanger Iraq’s fragile territorial integrity.

This has, however, largely failed so far. The fact that the largest American oil companies are doing business with the KRG undermines the US position, a point frequently highlighted by Turkish officials. Ankara says if the United States is so concerned, it should chastise its companies first.

For example, Barzani, who headed a high-ranking delegation to the International Economic Forum in St. Petersburg on June 20-22, held talks with senior Chevron officials and was assured of the company’s full commitment to its production-sharing agreement with the KRG.

In St. Petersburg, Barzani also met Alexey Miller, the chairman of the Russian Gazprom Neft Company, which has a growing stake in Northern Iraqi energy, too. Miller is also reported as having “reiterated that his company will continue its operations in Kurdistan.”

All in all, Barzani acted more like the leader of an independent state than the head of a mere administrative, albeit autonomous, subunit of Iraq during this gathering of government and oil-industry representatives. One of his most crucial meetings in St. Petersburg, however, was with Turkish Energy and Natural Resources Minister Taner Yildiz.

Tellingly, this meeting came a few days after Yildiz’s counterpart in the KRG, Hawrami, said during a June 19 press conference in London that the long-debated oil pipeline between Northern Iraq and Turkey’s Mediterranean coast would be completed by the end of September.

With this pipeline, Kurdish oil will enter the currently inactive pipeline between Kirkuk and Ceyhan in Turkey at the Fishkhabur pumping station near the Turkish border. From there, it will flow to the port of Ceyhan for use in the Turkish market and for exporting to world markets. The KRG, which is unable to use the Kirkuk-Ceyhan pipeline, has been sending small amounts of its stranded 1 million barrels of oil to Turkey by road tanker.

It hopes to send an initial 300,000 barrels per day (bpd) once the pipeline is up and running. Hawrami said during his London press conference that they would be able to export over 1 million bpd by December 2015, and 2 million bpd by 2019, once new pumping stations are constructed. He added that the KRG is also interested in exporting some of its estimated 3 to 6 trillion cubic meters of natural gas to Turkey and beyond after its domestic needs are met.

Ankara, whose ties with the Maliki government are tense for reasons which have also to do with other developments in Iraq and the region, and not just Turkey’s increasingly strategic energy ties with the KRG, says it wants to increase energy cooperation with Baghdad.

Pointing to Turkey’s own hunger for energy, the Atlantic Council’s Ross Wilson (a former US ambassador to Turkey) and David Koranyi indicated in a recent brief that Ankara also wants to decrease its natural-gas dependence on Russia and Iran. Ross and Koranyi wrote, “Turkey would like access not just to KRG resources, but also to those in the rest of the country, and it wants a friendly Iraq as well.”

According to the Cihan news agency, Taner Yildiz told Barzani during their meeting in St. Petersburg that Turkey was prepared to do what was necessary for normalization of ties between Erbil and Baghdad. Yildiz said, “With its north, south, east and west, Iraq as a whole remains extremely important for us.”

But with the actual situation unfolding on the ground, news of the pipeline connecting Northern Iraq and Turkey is a harbinger of new tensions, as Wilson and Koranyi point out. They argue, “By making possible oil not controlled by the Iraqi central government, this new pipeline and what it represents pose risks for Erbil’s relationship with Baghdad and for Turkey and its ties with both the KRG and the Iraqi government of Prime Minister Nouri al-Maliki.”

Meanwhile, eyes are trained on the recent fighting between the PYD and Islamist Arab groups in northern Syria, but little attention is paid to those who say that part of the reason for this confrontation is control of the region's oil fields. According to Reuters, on July 18 the Syrian Observatory for Human Rights said the fighting had spread into the largely Kurdish province of Hassakeh, and battles are raging around the Rumeilan oil field, about 200 km (125 miles) east of Ras al-Ain.

Kurdish units have already seized an oil field called “Suwaidiya 20” and there are clashes in Suwaidiya Oil Region 3, according to the observatory. Turkey is closely monitoring the headway the PYD is making in northern Syria, and will no doubt do what it can behind the scenes to try and prevent it from taking control over these reserves. It will be interesting, however, to note how Ankara responds to moves toward regional autonomy by the Syrian Kurds, when its own energy ties with Northern Iraqi Kurds is encouraging the emergence of an independent Kurdistan.