Baghdad has threatened legal action in response to the Kurdistan Regional Government's decision to export oil to Turkey, while Washington stands by, writes Semih Idiz. 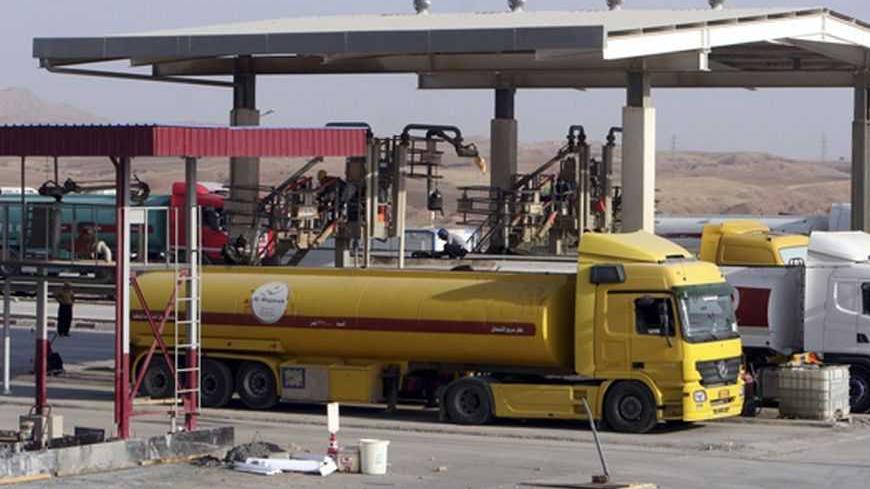 Tanker trucks wait to be loaded at Taq Taq oil field in Arbil at the semi-autonomous Kurdistan region of northern Iraq, about 220 miles north of Baghdad, Sept. 5, 2012.

In a major but relatively unnoticed move, the Kurdistan Regional Government (KRG) in Iraq has authorized crude oil exports to Turkey, with the aim of reaching world markets independent of the central government. KRG Minister of Natural Resources Ashty Hawrami told reporters in Arbil this week that crude oil had started to be trucked to Turkey as of Jan. 8.

The development is likely to increase tensions in the already strained ties between the Iraqi Kurds and Baghdad, as well as between Baghdad and Ankara. The development also comes despite strong disapproval from Washington, which worries that bypassing Baghdad risks the breakup of an Iraq already suffering from ethnic and sectarian rivalry.

“We don’t support oil exports from any part of Iraq without the appropriate approval of the Iraqi government,” State Department Spokesperson Victoria Nuland told reporters in early December. Washington is concerned that full control over the vast oil and gas reserves in Northern Iraq would encourage a Kurdish bid for independence.

Industry estimates indicate that the KRG is sitting on 30 percent of Iraq’s proven oil reserves of 143 billion barrels, and has up to 6 trillion cubic meters in natural gas reserves. If Kurdistan were independent, it would be among the 10 richest countries in the world, experts say.

Turkish officials are quick to respond to the US criticism by pointing out that Exxon Mobil Corp. and Chevron Corp. are the top two investors on the list of the largest foreign companies operating in Northern Iraq independently of Baghdad. They add that there are at least 40 other US companies operating in the region controlled by the KRG.

A senior US official in Ankara told Al-Monitor that while the US disapproved of Turkey’s growing ties in the field of energy cooperation with the KRG, they were not acting to prevent it.

"As for the American companies in the region, we are only advising them that they could face legal problems,” the source added, confirming indirectly that there is major American involvement in the region independent of Baghdad.

Washington is also concerned by the growing tension between the governments of Turkish Prime Minister Recep Tayyip Erdogan and Iraqi Prime Minister Nouri al-Maliki. Relations between Ankara and Baghdad have soured not just over Turkey’s ties with the KRG, but also because they back different sides in the Syrian crisis.

Because of the importance of their ties with Washington, Iraqi Kurds have refrained from talking about independence, which remains a touchy topic for Turkey  as well, even as Ankara has developed ties with the KRG. Since the 1990-91 Gulf War, successive Turkish governments have feared the emergence of an independent Kurdistan on its border, believing this would further encourage Kurdish separatism in Turkey.

No Turkish census has ever determined ethnic origin, since this would belie the national myth of an "ethnically unified nation" promoted since the republic was founded in 1923. Some current estimates say the Kurds represent 10 percent of the overall population of around 75 million; other estimates run as high as 25 percent. What is not disputed is that Turkey has the largest Kurdish minority in the region.

Ironic as it may sound, many in Turkey used to believe — and some still do — that an independent Kurdistan was part of Washington’s ultimate agenda in redesigning the "Greater Middle East.” US Vice President Joseph Biden, as the top Democrat in the Senate Foreign Relations Committee at the time, further stoked these fears when he suggested in an article in The New York Times in May 2006 that Iraq should be divided among Kurds, Sunni Arabs and Shiite Arabs.

But times have changed, and Biden today seems more worried than Turkey about a breakup of Iraq. That said, Ankara has not intimated in any way that it would be happy with the break up of Iraq. Indeed, Turkish officials believe a breakup would have dire implications for Turkey, as the result of the broader conflicts developing in the Middle East.

Turkish officials are also aware, of course, that an economically developed Northern Iraq, capable of administering itself and protecting its own interests, will encourage a desire for independence among Iraqi Kurds. Asked by Al-Monitor if Turkey’s independent ties with the KRG today, especially in the strategic energy field, are encouraging such an outcome, a foreign ministry source in Ankara, who preferred not to be named, showed little concern.

"Consider how worried we were about even talking to the Iraqi Kurds just a few years back and look where we are now," the source said. "So it is best not be too categorical about what the future might bring. You have to keep your options open in this part of the world."

The trucking of crude oil from Northern Iraq's Taq Taq oil field began on Jan. 8 with relatively modest volumes. The field is operated by Genel Energy, an Anglo-Turkish company headed by former BP CEO Tony Hayward. On Jan. 9, Hayward told reporters that the volume was expected to rise to between 10 and 20 thousand barrels per day in the next few weeks.

Genel Energy is also said to be interested in a pipeline that would connect the region to Turkey independent of any control from Baghdad. Given the strategic nature of pipelines, this would clearly enhance the ties between Ankara and the KRG.

KRG Minister of Natural Resources Ashty Hawrami is extremely upbeat about the energy cooperation with Ankara. Hawrami believes that with the resources the KRG has under its control and a pipeline connecting the region to eastern Anatolia, they could also supply gas to the Nabucco pipeline "for 100 years." He was referring to a project which aims to carry Caucasian and Central Asian gas to Europe via Turkey, but which has been stalled due to supply issues.

Meanwhile the Financial Times reported recently that Ankara and the KRG are set to conclude an agreement for a massive Turkish investment in Northern Iraq's oil and gas sector, which the paper said could transform the region.

Not surprisingly Baghdad has reacted angrily to these developments. It said in a statement that any crude oil trucked to Turkey was "illegal" and amounted to "smuggling" for which it threatened to go to court.

Baghdad kicked out the Turkish Petroleum Company from an oil exploration deal in Southern Iraq in November, a move that was taken as a clear indication of its anger with Turkey. Baghdad also refused to give permission for Turkish energy minister Taner Yildiz’s plane to land in Arbil, where he was due to attend a December conference on energy cooperation.

There seems to be little that can stop the ball from rolling on energy cooperation between Ankara and Northern Iraq. Developments suggest that a both sides have made a strategic decision despite Baghdad and US opposition.

Semih Idiz is a contributing writer for Al-Monitor’s Turkey Pulse. A journalist who has been covering diplomacy and foreign-policy issues for major Turkish newspapers for 30 years, his opinion pieces can be followed in the English language Hurriyet Daily News.