Western oil ministers and experts warn that a recent agreement between the Baghdad and Erbil governments to export 150,000 barrels of oil a day through Turkey is just a first step toward re-unifying Iraq and meeting global energy demand. 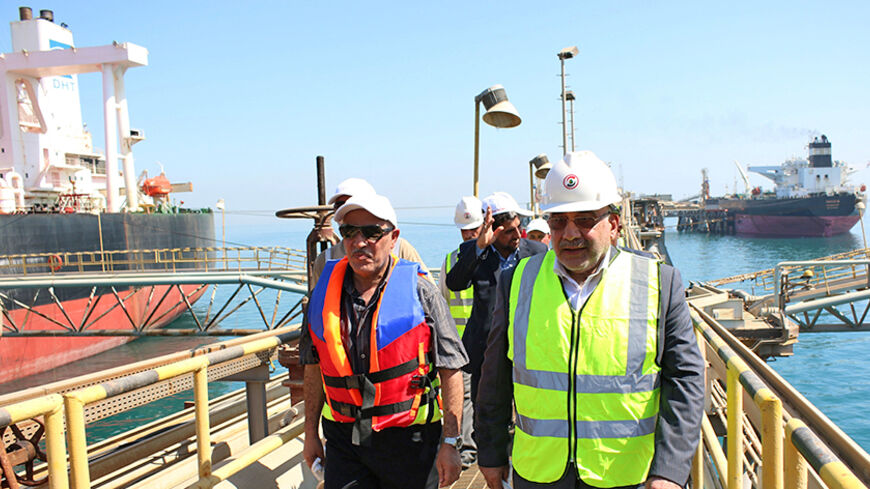 ISTANBUL — Iraq’s new oil minister, Adel Abdul Mahdi, conceded at an energy summit here on Nov. 19 that he inherited a depleted budget and that the central government now values an oil pipeline from the Kurdish area of Iraq to Turkey whose construction Baghdad once bitterly opposed.

Mahdi answered questions from Al-Monitor in a brief interview a day after Baghdad transferred $500 million to the Kurdistan Regional Government (KRG) in return for the KRG starting to pump 150,000 barrels a day of Kurdish oil into the Iraqi state petroleum company’s storage tanks at Ceyhan, Turkey.

In the past, Baghdad vehemently objected to the Iraqi Kurds exporting oil through Turkey and withheld the 17% of Iraqi oil revenues it was supposed to provide to pay the salaries of KRG employees. However, that was before the ouster of former Iraqi Prime Minister Nouri al-Maliki and his replacement by a more inclusive politician, Haider al-Abadi, in the wake of the rapid advance of the group that calls itself the Islamic State (IS) deep into western Iraq. Now Baghdad and Erbil appear to be serious about completing a long-stalled hydrocarbon law and increasing production and exports from both the Kurdish area and the rest of Iraq not under IS control.

While Mahdi noted that Iraq is still producing 3.2 million barrels a day from oil fields in the south, he said, “we hope Kurdistan can produce more” and add to the 300,000 barrels a day it is currently exporting.

Ashti Hawrami, the KRG’s minister of natural resources, said his region hopes to export 400,000 barrels a day by next year and also to become an exporter of natural gas by 2017-2018.

“This is probably our last opportunity between Baghdad and Erbil to get this right,” Hawrami said about their chronic disagreements over revenue sharing and decentralization of power.

Energy officials, experts and top oil executives attending the annual conference organized by the Atlantic Council all hailed the interim deal reached last week between Baghdad and Erbil as a crucial first step toward re-unifying Iraq in the face of the IS threat. But they cautioned that more would need to be done to boost Iraq’s oil production and to help the world meet a growing demand for energy.

“Without growth from the Middle East, around 2020 we have no chance whatsoever to meet growth and demand [for energy] with affordable prices,” US Energy Secretary Ernest Moniz told the conference. “Half of it needs to come from Iraq. In order to see that growth we need to invest today, and today we are looking at insecurity in the Middle East, especially Iraq.” Moniz added that Iraq needs $15 billion a year in investment to achieve its potential but “I do not see this great appetite for investments.”

The Iraqi central government appears to have faced a challenge simply coming up with the funds to pay the KRG.

Dlawer Ala'Aldeen, president of the Middle East Research Institute, a think tank based in Erbil, told Al-Monitor that Mahdi’s “pot is empty because Maliki overspent. He [Mahdi] genuinely wants to make it work but he inherited a bankrupt budget.’’

Asked by Al-Monitor if this was the case, Mahdi paused.

“You should ask the minister of finance,” he said. Then he noted that “a good part” of Iraqi oil production had been cut because of the recent instability. The Baghdad government also had spent “too generously” on military and security expenses, Mahdi said, adding that corruption had also been a factor.

Iraq should have sufficient revenues, Mahdi continued, to meet an annual budget of $100 billion, but “the error was the expenses. … The problem in our case is the costs, not the revenues.”

Oil company executives expressed optimism about rising Kurdish energy production and said they were committed to investments there despite the scare posed by IS’ swift advances to the outskirts of Erbil over the summer.

Tony Hayward, CEO of Genel Energy and the former head of BP, told the conference that “we don’t see security as an impediment to continued investment and production” in the Kurdish region. “2014 is looking like it will be a seminal year” for the KRG’s oil and gas prospects, Hayward said. He said the pipeline to Turkey has a capacity of half a million barrels a day and “can easily be expanded to 700,000.”

Some of that additional oil may come from Kirkuk, which the KRG has claimed. Hayward said there are an estimated 300,000 barrels per day of so-called stranded oil in the area, which “has to go out through the KRG.”

Appearing on the same stage together, the oil ministers of Iraq and the KRG presented a picture of unity and addressed each other by their first names.

“What we did last week was just the kickoff of a process … a goodwill gesture,” Mahdi said. To reach a final agreement “needs courage and leadership and there is good leadership on both sides.”

“I look forward to the next chapter of cooperation,” Hawrami said. “Iraq needs unity, transparency, laws and decentralization.”

The crisis has put an end at least temporarily to Kurdish threats to hold a referendum on independence.

“The Kurds have finally realized they cannot deal without Baghdad,” Ala'Aldeen told Al-Monitor. “They now consider Baghdad more important than Iran and Turkey.”

At the same time, Ala'Aldeen said, Mahdi “desperately needs the Kurds because of ISIS [another acronym for IS]. … Now they need the pipeline that the KRG constructed to export Iraqi oil … Baghdad needs Erbil just as desperately as Erbil needs Baghdad.”

Carlos Pascual, a scholar at the Center for Global Energy Policy at Columbia University and a former US special envoy for international energy affairs, told the conference that Iraq also needs a new way to finance investment because it is “using current revenues to pay for production.”

Without more investment, Pascual warned, Baghdad “cannot deliver on its promises to bring back the Sunni population and to reach to the Kurdish population and keep Iraq together.” He called the recent agreement to export 150,000 barrels of Kurdish oil a day on the part of Iraq “a starting point not a solution.”

Hawrami said he had no doubts about Mahdi’s sincerity and called the latest agreement “brave.” But such cooperation between Baghdad and Erbil “does have enemies,” Hawrami said, without naming them.

The ministers and experts also expressed optimism about a possible nuclear deal between Iran and the international community unlocking Iran’s energy potential and said that would not detract from the importance of Iraq to global energy supplies.

“If we could bring Iran back into the global community, I’m certain you would see significant foreign exchange investment flow into Iran,” Hayward said. It would be “in addition to not instead of” investment in the KRG.

“This process has to be completed,” Turkish Energy Minister Taner Yildiz said of the nuclear talks now underway in Vienna. “We believe in this strongly.”