Questions remain over what the Kurdistan Regional Government is to do with the quantity of oil it is not exporting under Baghdad’s supervision. 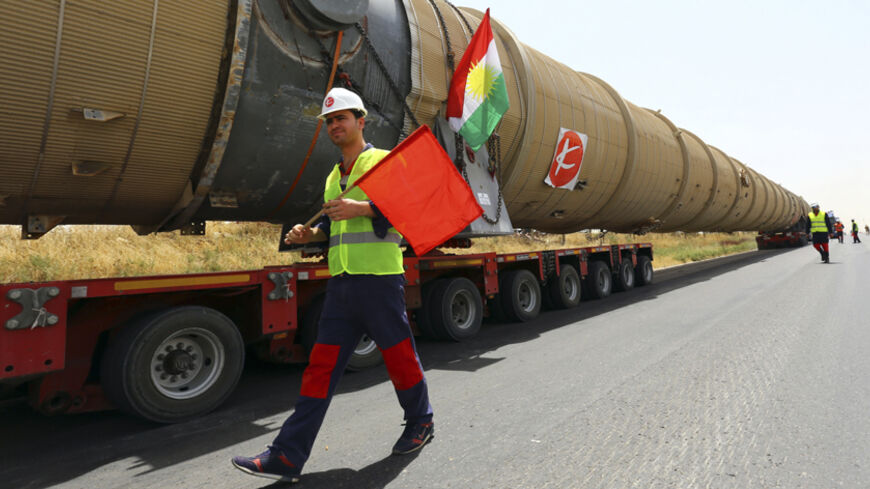 A worker walks past a prefabricated section of an oil refinery, which is being brought by truck to the Kalak refinery on the outskirts of Erbil, in Iraq's Kurdistan region, July 14, 2014. - REUTERS

ERBIL, Iraq — The new oil agreement between Iraq’s federal government and the autonomous Kurdish government in the north appears to have left some room for confusion as to what the Kurds should do with the significant amount of oil that they do not export under Baghdad’s supervision.

According to the deal signed on Dec. 2, the Kurdistan Regional Government (KRG) pledges to export under Baghdad’s supervision 300,000 barrels of oil per day from oil fields it controls in Kirkuk province in addition to 250,000 barrels per day produced from the three provinces officially under the KRG’s jurisdiction. In return, the Iraqi government will hand 17% of the national budget to the KRG. The deal will take effect from the beginning of the coming year.

However, the KRG produces more oil than the 250,000 barrels mentioned in the agreement. Dilshad Shaban, deputy chairmen of the energy committee in Kurdistan parliament, told Al-Monitor that the region currently produces 500,000 barrels per day, of which 150,000 is for domestic consumption and the rest used for export. Hence, the key question is what the KRG will do with the remaining 100,000 barrels.

In a statement to the news media Dec. 3, KRG Deputy Prime Minister Qubad Talabani said that under the new deal with Baghdad, KRG oil exports would be legal, in an apparent reference to the remainder of produced oil not covered in the agreement.

However, Iraq’s Oil Ministry issued a counterstatement Dec. 6, saying the position of the Iraqi Oil Ministry and government was unchanged with regard to “the illegality of any oil dealings outside the numbers and frameworks” put forward in the bilateral agreement. It also denied the existence of any “verbal or written agreements” that might have given KRG the right to export oil outside the framework of the agreement.

Shaban said the KRG has not been willing to place all its produced oil under Baghdad’s control so it could export some oil on its own if Baghdad failed to provide the KRG its payments due from the 2014 budget. The Iraqi government has not paid the KRG its share of the national budget since February, amounting to 16 trillion Iraqi dinars, approximately $13 billion, according to Kurdish sources.

The current deal appears to have resulted from a dire need for cash by both the KRG and Iraqi government.

Amid an intensifying fight against the Islamic State (IS) militants and plummeting oil prices in global markets, Baghdad and Erbil are struggling to pay the bills.

Due to the circumstances surrounding the deal, it has made some question the agreement’s survival should more favorable conditions for the KRG and Baghdad emerge.

“Both sides needed that agreement. For Kurdistan, it was difficult to be able to provide for its budget through internal revenues and [independent] oil sales,” said Shaban, the Kurdish MP. “As long as we live within Iraq, such an agreement is the best.”

Struggling to pay its civil servants and fund public projects, the KRG in the previous months had borrowed around $4 billion from foreign companies operating in Kurdistan, Shaban said.

Under an earlier deal signed in November, the KRG has so far received a payment of $500 million and is due to get a similar amount this week or next, according to Shaban.

An important fact often overlooked in media debates regarding the deal is that it is not envisioned as a comprehensive long-term pact, but rather as a one-year deal meant to facilitate the ratification of Iraq’s 2015 budget law.

“Without this agreement. Iraq’s 2015 budget balance would have suffered a major deficit. This will be a return of sovereignty and trust to Iraq that did not exist under Maliki,” said Shaban.

Some believe the current deal should constitute the basis for a broader, longer-lasting agreement between the two sides and should not be viewed as a convenient short-term contract.

“If it is not going to be a principled agreement then it won’t hold, which means both sides will lose,” Aziz Kadhim Alwan al-Akeli, a member of parliament from the Shiite-dominated al-Mowaten bloc, told Al-Monitor. Iraqi Oil Minister Adil Abdulmahdi, who played a pivotal role in negotiating the deal, hails from al-Mowaten bloc as well.

Under the current deal, the Iraqi government will also pay the Kurdish peshmerga forces nearly $1 billion in due payments.

The lack of clarity as to how the KRG should handle the remainder of its oil not covered by the deal might potentially affect the implementation, and even survival, of the much-touted agreement.

Distrust has been rather the norm in relations between the current class of politicians on both sides for much of the past decade.

That lack of trust pushed the KRG over the past couple of years to seek closer relations with its northern neighbor, Turkey, to secure an alternative route to export its oil to global markets.

When the IS captured large swaths of territory in western and central Iraq in June, Kurds thought they had the best opportunity in their contemporary history for independence from Baghdad and counted on Ankara for support given “strategic” long-term energy deals they had recently signed with Turkey.

But Ankara’s failure to assist the Kurds in substantive ways in the face of an all-out invasion in August by the IS on Kurdish territory seems to have prompted Kurdish leaders to reconsider their relations with Ankara to some extent.

Many see Erbil’s willingness to sign a deal with Baghdad as a manifestation of the realization that they cannot be too trusting toward Ankara either.

“It is possible that disappointment with Turkey might have had some impact in changing the direction [of KRG from Ankara] toward Baghdad,” Adnan Osman, a former Kurdish MP, and current political commentator. “The Kurdistan Region is part of Iraq and the KRG has to work with Baghdad.”