In extensive remarks to a Washington audience, Kurdistan Regional Government Deputy Prime Minister Qubad Talabani said more negotiations are needed to turn a recent oil and budget agreement with Baghdad into a sustainable revenue-sharing law that could reunite Iraq. 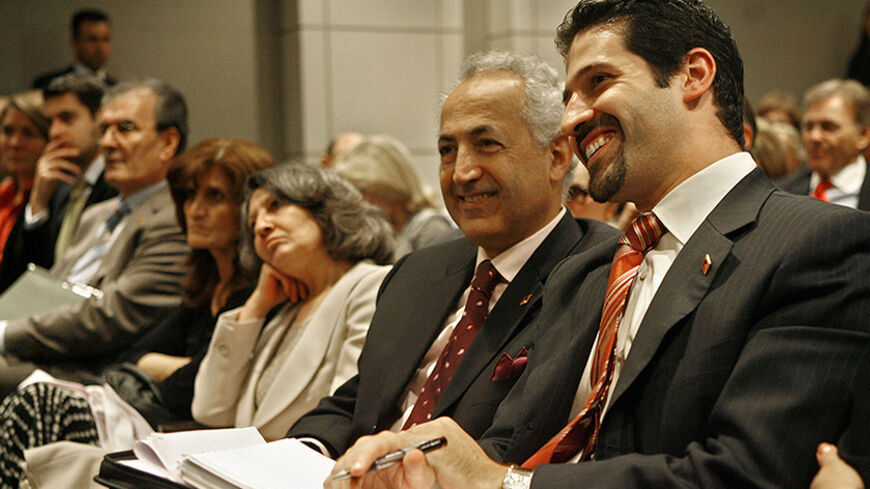 Qubad Talabani, the deputy prime minister of Iraq’s Kurdistan Regional Government (KRG), said Dec. 10 that the oil and budget deal recently signed with Baghdad would provide the Kurds with only 10-11% of the Iraqi budget, not 17% as has been reported. The funds are needed by Erbil to combat Islamic extremists, pay other expenses and care for 1.5 million Iraqis displaced by the fighting.

“We’ve not getting 17%; we’ve never gotten 17%,” Talabani said in response to a question from Al-Monitor. First, he said, the Baghdad government subtracts so-called sovereign expenses, including military and oil company costs. He said the KRG then gets 17% of what is left.

Talabani, in Washington to consult on US policy toward Iraq and the fight against the group that calls itself the Islamic State (IS), referred to the deal inked Dec. 2 as a “temporary agreement” albeit “a very important first step” in reconciling chronic differences between the Iraqi central government and the Kurds. The arrangement, which is to last only one year and must be ratified by the Iraqi parliament, allows the KRG to legally market 250,000 barrels of its own oil and another 300,000 barrels from the disputed territory of Kirkuk on behalf of the Iraqi state oil company.

In the coming year, Iraqis and Kurds hope to reach “a more sustainable agreement” that addresses revenue and power sharing, territorial disputes and includes recognition of the KRG’s own “sovereign costs” for its peshmerga forces and oil production, Talabani said.

Iraqi ambassador to the United States, Lukman Faily, who attended Talabani's address, told Al-Monitor that the recent deal was a "confidence-building measure."

Talabani confirmed that the agreement does not cover an additional 250,000 barrels a day of oil currently produced in the KRG, of which about 150,000 barrels are used for domestic consumption and 100,000 are available for export. “We didn’t get into any discussion about the surplus,” Talabani said.

Kurdistan expects to produce 800,000 barrels of oil a day within a year and wants to refine much of that crude, Talabani said. “We hope to have reached a final solution on what to do with all of the production [by then].”

Talabani said the KRG needs about $1.3 billion a month to meet its expenses, which include caring for 1.5 million Iraqis who have fled to the Kurdish region in the past year from other areas under IS control. Because they are internally displaced, these Iraqis do not qualify for the sort of international assistance that goes to refugees who cross borders.

“I never thought I’d see people living in tents again,” Talabani said, alluding to the time after the 1991 Gulf War when Kurds and others fled bombing by Saddam Hussein’s regime. “Unfortunately, we’re back at war.”

Military costs and corruption depleted the Iraqi central government’s coffers and were a factor in the removal of former Prime Minister Nouri al-Maliki. In response to a question from Al-Monitor, Talabani said that Iraq’s new finance minister — Hoshyar Zebari, a Kurd and veteran Iraqi official — was “unpleasantly surprised at the state of the country’s finances” when he took office.

Baghdad now needs the KRG to export oil to meet its own budget commitments, a major reversal given its prior opposition to a Kurdish pipeline that connects to the Turkish port of Ceyhan. The share of revenues the Kurds are to receive is roughly equal to the amount of oil they are exporting on behalf of Baghdad, Talabani said.

The provisional agreement between Erbil and Baghdad could also provide a template for reaching out to disaffected Sunnis. Asked by Al-Monitor what share of budget revenues the Sunni provinces of Iraq should receive, Talabani said that would be among the topics of discussion in the coming year.

“We have this year to reach agreement on the revenue-sharing law,” he said and also on the institutions that will execute that law.

“Iraq can’t keep failing like this,” he added, referring to Maliki’s decision in February to cut off payments to the KRG. Talabani said the Kurds only decided to begin exporting oil on their own after Maliki exercised this "nuclear option."

The Erbil-Baghdad agreement also provides $1 billion in support for the peshmerga, which Talabani said is combating IS on eight separate fronts. The Kurds are also receiving US weapons. Deputy Assistant Secretary of State Brett McGurk told a congressional hearing Dec. 9 that both the Kurds and the Iraqi central government are getting all the arms they have requested. The United States has also agreed to send more US forces to train and advise local forces for a total of about 5,000 American military personnel.

Talabani, who was meeting with McGurk later in the day, had no reply when asked by Al-Monitor whether the United States has an overall strategy to defeat IS.

Jon Alterman, an expert on the region at the Center for Strategic and International Studies, told Al-Monitor that the Barack Obama administration still lacks such a strategy because “they’ve been reluctant to get very far down the road of thinking through Syria,” where the jihadist group also controls considerable territory. The reason for the US indecision, Alterman said, was that the administration doesn’t want to risk alienating members of the anti-IS coalition that have differing views about Syria’s political future.

Meanwhile, the war against IS has put on hold Kurdish aspirations for independence, although Talabani said that remains a long-term goal.

“We have grounds to become independent, but we have to also realize we are not neighbors to Luxembourg or Switzerland,” he said. Independence “will happen in our lifetime,” he asserted, as part of a “natural progression” that avoids hostility with neighboring states.