US Tries to Reconcile Ankara and Baghdad

The tensions between Ankara and Baghdad continue to increase and the US is trying to bring both sides together, writes Semih Idiz. 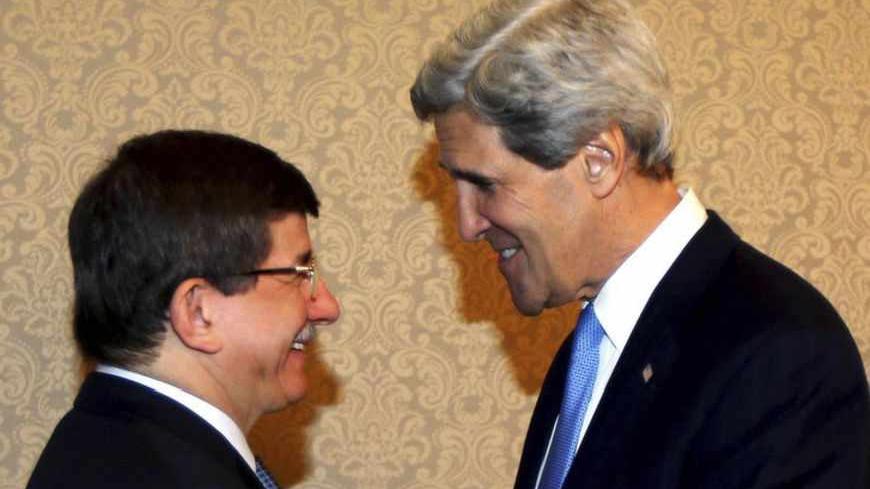 Although it did not get as much news coverage as the Turkey-Israel or Syrian files, Ankara’s tense relations with Baghdad were also among the key topics discussed during US Secretary of State John Kerry’s talks with Foreign Minister Ahmet Davutoglu in Istanbul over the weekend.

Judging by what is filtering through the diplomatic grapevine, and what has being written about the topic recently, Washington is increasingly wary about developments in Iraq which suggest the country may be heading for a division that is bound to influence regional balances in favor of Iran.

Accusative remarks by Nechirvan Barzani, the prime minister of the Kurdistan Regional Government (KRG), quoted by the Kurdish English-language daily Rudaw, to the effect that Iraqi Prime Minister Nouri al-Maliki is heading the country into a possible civil war do not help allay these concerns, of course.

Meanwhile, the Obama administration continues to express its disapproval of the growing cooperation between the KRG and Ankara, particularly in the strategic energy field, which the US fears is merely fueling those dynamics that are working for a division of Iraq along ethnic and sectarian lines.

There is a historic irony here, since it was Turkey a decade ago that was convinced that one of Washington’s aims, following its invasion of Iraq in 2003, was to establish an independent Kurdistan in Northern Iraq, whose emergence would divide that country into separate Arab and Kurdish or Kurdish, Shiite and Sunni entities.

The elemental Turkish fear at the time was that an independent Kurdistan would fuel Kurdish separatism in Turkey, especially at a time when Turkish security forces were combating the Kurdistan Workers Party (PKK), which has been waging a terror campaign since the 1980s for an autonomous Kurdish entity in Southeastern Anatolia.

Today, the roles have been reversed fundamentally and Washington is accusing Turkey — which in the meantime has made its peace with the Kurds or northern Iraq — of pursuing policies that could result in Iraq’s splitting up, not just along ethnic but also sectarian lines.

This contention ties in with current claims that indicate that the tension between Ankara and Baghdad is not just due to Turkey’s growing ties with the KRG, but is also the result of the “Sunnification of Turkish foreign policy” under the Islamist government of Prime Minister Recep Tayyip Erdogan.

What bolsters such claims is the fact that Maliki and members of his Shiite-led government have been accusing Turkey for quite some time of interfering in Iraq’s domestic affairs in order to influence the course of politics in favor of the country’s minority Sunnis.

The refuge Turkey provided for Iraqi Vice President Tariq al Hashimi, a top Sunni official who has received multiple death sentences for allegedly running anti-Shiite death squads, has also been used by the Maliki government to bolster this claim.

Given the fouling of the atmosphere between Ankara and Baghdad as a result of this, it was inevitable that the Maliki government should also see a Turkish hand in the mass rallies in Mosul, Ramadi and Fallujah in past months, which were organized to protest operations against leading Sunnis by the Iraqi security forces.

This is why it was surprising to see Maliki issue a statement a day before Kerry was expected in Turkey, indicating a desire for improved ties with Ankara. "Iraq welcomes any step towards rapprochement with Turkey on the basis of shared interests, mutual respect and good-neighborliness," Maliki said in his statement posted on his website April 5.

Diplomatic sources in Ankara see Washington’s hand in this too, the idea being that after having successfully laid the groundwork for a Turkish-Israeli rapprochement, the Obama administration, in line with its vision for a new Middle East, is now pushing for a similar rapprochement between the Erdogan and Maliki governments. Kerry has, of course, openly declared Washington’s desire to reconcile the estranged Shiites, Kurds and Sunnis in Iraq.

“We are working on trying to bring the Kurds and the Sunnis together with Maliki in a discussion that, hopefully, can bring people back together and get the democratic process back on track,” Kerry told reporters in Washington on April 3, during a joint news conference with Korean Foreign Minister Yun Byung-se.

He was talking against the backdrop of a boycott by the Kurds, and most Sunni ministers, of the Maliki government on the ground that it has been violating the constitution over disputed territories and budget allocations, as well as pursuing repressive policies against the Sunni minority.

Revealingly Ankara did not respond to Maliki’s unexpected friendly overture which came a day before Kerry’s visit to Turkey, although Reuters recently quoted Turkish Energy Minister Taner Yildiz saying, "With everything we do we have to pay attention to the sensitivities of the Iraqi central government."  Yildiz was referring to the increasing cooperation between Turkey and the KRG in the energy field.

Foreign Minister Davutoglu, for his part, acknowledged during his joint news conference with Kerry in Istanbul, that the topic of Iraq was also one of the key topics that had been discussed. He said Turkey was in accord with the US on the vital need to preserve the territorial integrity of Iraq on the basis of a political dialogue, which foresees a sharing of power and natural resources by all the parties concerned.

“For Turkey, Iraq’s territorial integrity is a basic principle. But it is important for the structure of the Iraqi government to be made up in a democratic environment that includes all the sides” Davutoglu said. His qualifying of his remarks in this way is bound to be taken by the Maliki government as a clear indication of further interference in Iraq’s domestic affairs.

Despite Yildiz’s remarks quoted by Reuters, Ankara has also given no indication that it on the verge of altering its energy policy in relation to Northern Iraq in order to please Baghdad and Washington. To the contrary, Ankara and Erbil have displayed determination to go ahead with a pipeline project that will carry Northern Iraqi gas as of 2014 to Turkey and beyond, independent of Baghdad.

This was also the key topic of discussion during the visit of Nechirvan Barzani to Ankara in late March, when he met with Erdogan to discuss the modalities for taking the pipeline project forward. Industry experts say Turkish involvement in at least 12 independent exploration projects in Northern Iraq was also discussed by Erdogan and Barzani.

While Turkey stresses the importance it attaches to Iraq’s territorial integrity, those who accuse Ankara of acting in a way that belies this contention certainly have enough material to go on. Given Ankara’s estrangement from the Maliki government — which many argue is sectarian-based — as well as Turkey’s growing energy needs, Washington may find it much harder in the end to reconcile Ankara and Baghdad, than it did in laying the groundwork for a normalization of ties between Turkey and Israel.

Davutoglu nevertheless said, during his press conference with Kerry over the weekend that consultations with Washington on this matter would continue. But it will probably take reconciliation between Iraq’s Kurds, Shiites and Sunnis in the end to achieve a rapprochement between Ankara and Baghdad.

Some analysts, however, suggest that even that, which seems difficult in itself, may not be enough, given that Ankara and Baghdad are at opposite ends of a growing sectarian divide in the Middle East.

by Murielle KASPRZAK and Joseph SCHMID | AFP | May 26, 2022
END_OF_DOCUMENT_TOKEN_TO_BE_REPLACED