Semih Idiz writes that Turkey’s relationship with the Kurdistan Region of Iraq shows that Ankara can not only live with an independent Kurdistan, but also cooperate with it, despite the PKK factor. 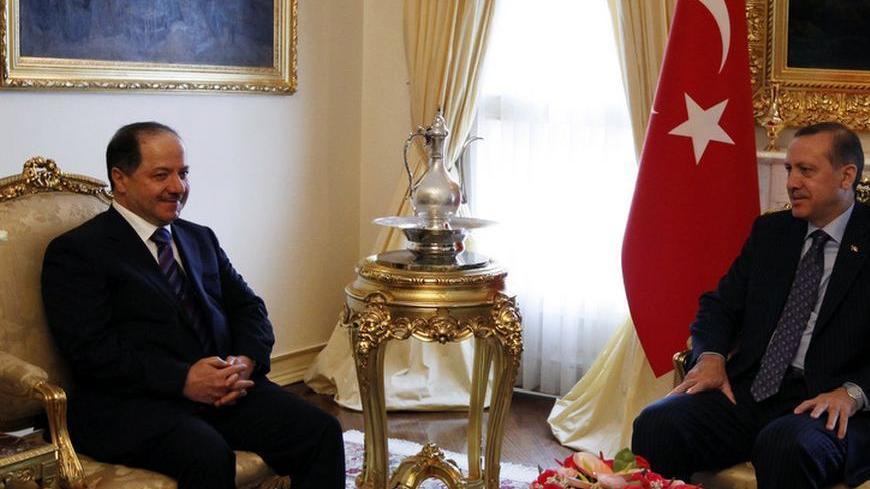 The idea of an independent Kurdistan bordering Turkey’s predominantly Kurdish southeast, which has been wracked with separatist violence from the outlawed Kurdistan Workers Party (PKK) for over quarter of a century, would have raised official hackles only a few years back.

During those days, Kurdish leaders Jalal Talabani, the current president of Iraq, and Massoud Barzani, the current head of the Kurdistan Regional Government (KRG), were objects of Turkish vilification for their alleged backing of the PKK, and its seemingly endless campaign for separation from Turkey in a war that has resulted in over 30,000 deaths to date.

Far from ceasing, PKK attacks have escalated today due to the crisis in Syria and the turmoil in the Middle East. Based on traditional assumptions this should have driven a bigger wedge between the Iraqi Kurds and Turkey. Meanwhile, nationalist Turks still believe the Iraqi Kurdish authorities are providing refuge and logistical support to the PKK lodged in the mountains of Northern Iraq.

However, the official position of Ankara towards the Iraqi Kurds has changed so fundamentally that many are left wondering why Turkey did not come around to its current position much earlier. The change in Ankara’s stance is so significant that Massoud Barzani, in his capacity of Kurdistan Region President, was one of the honored guests at the ruling Justice and Development Party (AKP) Congress in Ankara at the end of September.

In the meantime, Prime Minister Recep Tayyip Erdogan’s March 2011 visit to Erbil, the regional Kurdish capital, was a watershed event amounting to recognition by Ankara of the KRG as a separate political entity, and resulting in the rapid normalizing of ties between Turkey and the Iraqi Kurds. So what was the driving force behind this dramatic “volte-face” by Turkey, which once had 200,000 troops on the border threatening to move into Northern Iraq, and in fact going on to do so on a number of occasions?

An irony during the period of high tension between Ankara and the Iraqi Kurds is that this tension never prevented individual Turks or Turkish companies from moving into the region and beginning to invest there heavily. One of the masterminds of this economic cooperation, which today is clearly working to mutual advantage, was KRG Prime Minister Nechirvan Barzani.

The volume of trade between Turkey and Iraqi Kurdistan reached $8 billion — the largest share in trade with Iraq as a whole — as a result of his patient cultivation of the Turkish business community. In addition to this, Turkish construction companies have been engaged for years now in what amounts to the construction of a Northern Iraq, all paid with the region’s growing oil and gas wealth.

Given this situation it is inevitable that Turkish companies should also be interested in the region’s energy sector, which has already attracted major companies such as Exxon Mobil, Chevron, Total, and Gazprom. Work is underway for a pipeline to connect Turkey with the region in what the sides hope will be an alternative source of energy for the energy-hungry Turkish market.

With such interaction it appears that it is the economic interest that is really driving ties. That is how Nechirvan Barzani sees it too. “It’s very simple. Turkey needs something that it doesn’t have. We need certain things that we don’t have. This has been the proper understanding on both sides. And it doesn’t have anything to do with politics. It’s an economic matter,” he said in an interview with Time in November.

While there is an element of truth in this, it is clearly not the whole truth, especially at a time when animosity between the Erdogan government and Iraqi Prime Minister Nouri al-Maliki is increasing. Baghdad is accusing Ankara of meddling in Iraqi affairs, by backing radical Sunni elements in the country and signing illegal energy deals with the Iraqi Kurds over the head of the Iraqi government.

The fact that Turkey has provided refuge to Iraqi deputy President Tariq al-Hashemi, accused by Maliki of establishing death squads against Shiites, has not helped the situation. Hashemi currently faces a death sentence in Baghdad. Ankara in turn is accusing the Maliki government of divisive policies that will increase sectarian tensions in the Middle East. The sides are also seriously at odds over the crisis in Syria.

Meanwhile tension is rising between Baghdad and the KRG over oil and gas rights, as well as disputed territories, resulting in a military standoff between the sides earlier this month over the oil-rich city of Kirkuk. These factors have clearly combined to force Ankara to look at its ties with Iraqi Kurds from a more strategic perspective.

As for the KRG, it seems to have no illusions as to how important Turkey is for continued stability in Northern Iraq.

“We have a door of hope, which is Turkey. And if that door, that hope is closed, it will be impossible for us to surrender to Baghdad,” Nechirvan Barzani told Time.

He appeared to be suggesting that without Turkey’s counterbalancing influence the Iraqi Kurds would have no choice but to go for independence to free themselves from Bagdad’s yoke.

On the other hand the military standoff between Iraqi Kurds and Baghdad earlier this month showed just how far the KRG has come in consolidating its power by converting traditional “Peshmerga fighters” into regular army units armed with tanks and heavy artillery.

Looking at the overall picture, one could say that independent Kurdistan is already a fact. Looked at from a traditional Turkish perspective, Turkey should be the country that stands to lose the most from this. But changing circumstances have forced Ankara to look on matters in a different light and tolerate a “de facto” Kurdistan, if not a “de jure” one.

Turkey appears to be saying, “Let’s not name it, but tolerate it and reap the advantages of our ties with what amounts to an independent Kurdistan.”  The Kurds still appear committed to the notion of a unified Iraq, of course, mainly due to pressure from Washington, provided they are treated as equal partners. Whether this position can be sustained in the long run remains to be seen.

The bottom line in all this, however, is that Turkey is showing it can not only live with an independent Kurdistan, but also cooperate with it, despite the PKK factor which continues to cause tensions between the sides. This is a momentous change of position. That such a Kurdistan will also need good ties with Turkey, on the other hand, goes without saying and is openly admitted to by Kurdish officials.

Semih İdiz is a contributing writer for Al-Monitor’s Turkey Pulse. A journalist who has been covering diplomacy and foreign-policy issues for major Turkish newspapers for 30 years, his opinion pieces can be followed in the English language Hurriyet Daily News. His articles have been published in The Financial Times, the Times, Mediterranean Quarterly and Foreign Policy magazine, and he is a frequent contributor to BBC World, VOA, NPR, Deutche Welle, various Israeli media organizations and Al Jazeera.