Tehran and Ankara are struggling to keep up appearances as differences over Iraq and Syria begin to take a toll on their bilateral relationship, writes Semih Idiz. 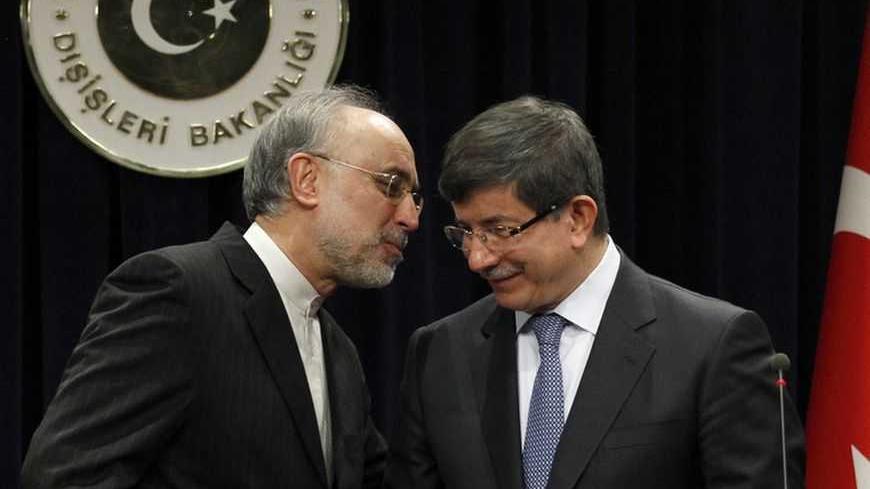 Ask diplomats from both countries and they will say Turkish-Iranian relations rest on a solid foundation, despite occasional turbulence and attempts by “nefarious western countries” to spoil them. But the situation is not that rosy with Ankara and Tehran increasingly competing for influence in the Middle East, rather than cooperating to stabilize the region.

Take Syria, for example, a topic that both countries diverge on radically. Tehran continues to support President Bashar al Assad as a matter of vital importance for its regional interests. Ankara, on the other hand, continues to support Syrian groups fighting to depose Assad and overturn his regime.

Given this situation, Turkey and Iran are now accusing each other of prolonging the Syrian crisis. In a rare confession Foreign Minister Ahmet Davutoglu even admitted, only a few days ago, that he had what appears to be a futile phone conversation on the topic with his Iranian counterpart Ali Akbar Salehi.

“I discussed Syria with the Iranian foreign minister, but we cannot agree.” Davutoglu told reporters bluntly after a meeting of the Turkey-EU Join Parliamentary Commission in Ankara on Feb. 14. He nevertheless added that “they would keep the lines of communication open” with Tehran.

But this is not the only problem between the two countries. Tehran is also disappointed with Turkey for ostensibly bowing to pressures from the US in order to facilitate what Iranian officials claim are Western and Israeli military plans for the region. Tehran is also unhappy over the fact that Turkey’s trade with Iran has started to drop because of US pressures, a fact that is particularly noticeable in the dramatic fall seen in Turkey’s crude oil imports from Iran.

This fact is particularly noteworthy since officials from both countries frequently pointed to the growing levels of trade in the past, when trying to show just how “excellent,” ties between the two countries were despite pressures on Ankara to comply with Western sanctions on Iran.

Looking back over these past three decades one does see that lines of communication between the two countries have remained open and that ties have weathered many storms. This was especially the case in the 1980s and 1990s when staunchly secularist Turkish governments frequently accused Tehran of trying to export its Islamic revolution to Turkey.

Great hopes were raised in Ankara and Tehran for taking these ties even further after the advent of the Islamist Justice and Development Party (AKP) in Turkey in 2002. The AKP’s Islamist roots did in fact turn Ankara into a staunch supporter of Tehran against its Western critics and enemies who were, and still are, concerned that Iran is trying to become a regional nuclear power.

Prime Minister Recep Tayyip Erdogan annoyed Washington and Turkey’s NATO allies at that state when he  frequently suggested that he could not understand why those who possessed nuclear weapons where trying to prevent Iran from getting them. Erdogan’s first target was Israel, of course, but his remarks were clearly aimed at the US, too.

Turkey also achieved what it believed at the time to be major international coup for Turkish diplomacy, when, together with Brazil, it negotiated a swap deal in May 2010 with Tehran for Iran’s stock of enriched uranium. In Tehran, a jubilant Davutoglu said after the announcement of the deal that there was no longer any need for any UN sanctions against Iran, a remark taken in the West as a clear sign of Turkey’s advocacy of Iran.

But Washington rejected the Turkish-Brazilian deal and none of Turkey’s NATO allies were prepared to support it either. Instead, the US started applying pressure on Ankara to comply with the sanctions against Tehran, and to allow the stationing of NATO’s advanced anti-missile radar systems in Turkey — a vital part of the US-led missile defense shield project targeting Iran.

Weighing its NATO membership against advocacy of Iran’s rights, Ankara eventually complied with this request in November 2011 and allowed the deployment of this radar system in the town of Kurecik, in eastern Turkey. Erdogan and Davutoglu insisted vehemently then, and still do, that the radar was not against Iran, citing the fact that no NATO document relating to it referred to any country as a target.

American and NATO officials, however, made it clear through various statements that Iran was indeed the prime target. Meanwhile no one in Tehran accepted the Erdogan-Davutoglu line either. In the end, this deployment turned out to be a critical turning point in Turkish-Iranian relations that have since also come under added pressure due to the Syrian crisis.

The strong opposition by Iran to the deployment of Patriot missiles against a possible attack from Syria is also related to this topic. Tehran says the Patriots are in Turkey for the long haul adding that their real mission is to guard the radar system in Kurecik against a possible attack from Iran. Ranking Iranian military officials have made it clear that if Israel attacks Iran, all US and NATO facilities in the region will be considered legitimate targets.

Meanwhile Turkey’s tense relations with the pro-Iranian Maliki government in Baghdad, as Ankara continues to deepen political and economic ties with Northern Iraqi Kurds, are also fueling Iranian suspicions over Turkey’s regional intentions. Tehran is making its dissatisfaction over this known, too.

The Kurdish daily Rudaw reported recently that Iran had “warned Iraq’s autonomous Kurds against thinking about independence, harming relations with the Shiite government in Baghdad and getting too close to Turkey.”

This message was reportedly transmitted by Qasem Soleimani, the commander of Iran’s powerful Al Quds Force, to a delegation from Northern Iraq which recently visited Tehran. Al Quds is said to have enormous influence in Iraq, and is reportedly also helping the Assad regime in Syria fight against opposition forces.

“You should not think about the division of Iraq and harming Kurdish-Shiite relations” Soleimani reportedly told a delegation from the Patriotic Union of Kurdistan (PUK), one of the two major parties in Kurdish Northern Iraq.

The PUK delegation is said to have included Kosrat Rasul Ali, the party’s acting leader, its deputy secretary general Barham Salih and Khasraw Gul Muhammad, a member of the party’s leadership council. All three are highly influential figures in Northern Iraq.

Meanwhile, Baram Majeed Khan, a PUK advisor on Iranian affairs, was quoted saying "Iran is worried about the fact that the Kurdistan Region has strong economic and commercial ties with Turkey” and adding, “Iran feels that Turkey has crept into the Kurdistan Region more than it should."

Meanwhile, Iranian officials are said to be deeply disappointed with the 29% drop in crude oil exports by Turkey from Iran in December 2012, compared to the previous month, after Washington effectively blocked a “gold-for-oil” deal between the two countries.

Ankara could circumvent Western sanctions against Tehran by means of that deal under which oil and gas purchased by Turkey would be paid for in Turkish liras lodged in Halkbank, a state owned Turkish bank. Iranian operators would then buy gold bullion on the Turkish market with that money and transport it overland to Iran.

According to Reuters, a new provision of US sanctions which came into force on Feb. 6, effectively tightens control on sales of precious metals to Iran and also prevents Halkbank from processing oil payments for Iran by other countries.

Clearly, the lines of communication between Ankara and Tehran will remain open, but these developments belie the rosy picture diplomat are trying to paint for Turkish-Iranians relations which are marked increasingly with rivalry rather than amity.