Davutoglu Should Give Up 'Military Solution' in Syria

Turkish Foreign Minister Ahmet Davutoglu is getting nowhere in his bid to have the European Union lift the arms embargo on Syria, and he should realize his pursuit of a military solution there is only prolonging the conflict, writes Semih Idiz. 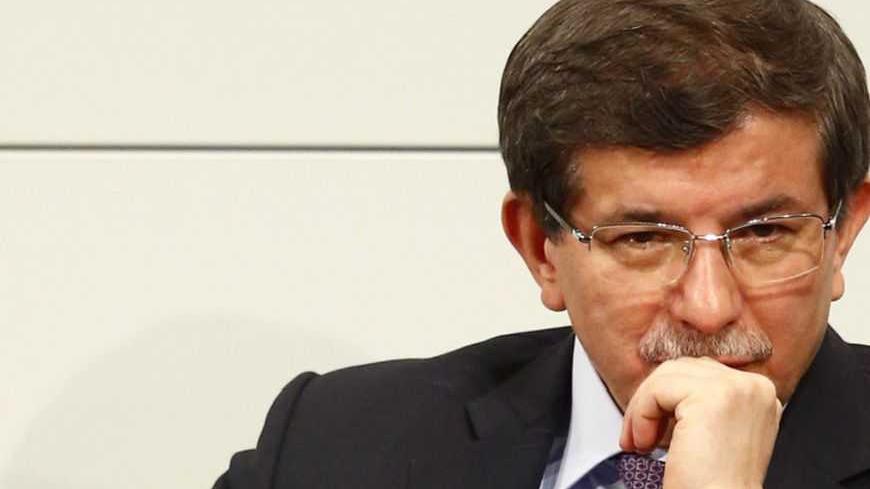 Turkish Foreign Minister Ahmet Davutoglu insists on flogging a dead horse. Having failed to persuade Washington during Secretary of State John Kerry’s recent visit to Turkey to supply arms to the Syrian opposition, he is now working on the EU to lift its arms embargo on Syria.

Visiting London last week for an international meeting on Yemen, Davutoğlu held talks with his British counterpart, William Hague, trying to convince him that the Syrian opposition is at a serious disadvantage because it lacks the necessary weapons. He did not openly call for a lifting of the EU embargo but it was clear that this is what he was getting at.

Asked by reporters if he wanted the embargo to be lifted, Davutoglu’s said tellingly: "If one side only has weapons at the end of the day, the side which has weapons in their hands have all the opportunities to kill the other side."

Davutoglu added that he had also taken up the matter with German Foreign Minister Guido Westerwelle recently. London and Berlin however have indicated that they are in favor of upholding the EU’s embargo. Hague in particular is concerned about Islamist fighters in Syria.

EU sources in Ankara indicate that as many as 500 members of Jabhat al-Nusra, the most successful group fighting the Assad regime, whose self-declared aim is to establish an Islamic republic in Syria, are from Europe.

The worry is not just that the group — which has Ankara’s political support and is also being armed by Turkey, according to EU diplomats — will be successful in Syria. EU officials are also concerned about what the European members of the group will do when they return to their home countries.

Davutoglu and other Turkish officials continue to argue, however, that these European fears are not just exaggerated, but are playing into President Bashar al Assad’s hands. Asked about these concerns in London, Davutoğlu said neither Libya nor Egypt had embraced radical Islam despite fears that this would happen.

"They are at war," he said of Syrian opposition fighters. "They are going to die. There are always religious slogans in war."

Clearly, however, he is making little headway in convincing his European partners to change tack on groups like Jabhat al-Nusra, which has already been designated a terrorist organization by the US and, judging by reports, the EU can be expected to do the same soon.

Given Ankara’s failure in this respect all that Davutoglu can do is complain from the moral high ground that "People are suffering on the ground and Turkey is paying the bill." But Ankara’s position on Syria begs a number of critical questions.

For example, it is true that “Turkey is paying the bill” for the growing number of Syrian refugees arriving at its door. Government officials put the figure at $600 million so far and complain of not getting sufficient international support in this respect.

When Turkish officials voice these complaints their targets are generally Western countries. Oddly enough, you rarely hear them complaining about a lack of support from oil-rich Gulf states, particularly Saudi Arabia and Qatar, for whom toppling Assad has also become a key political aim.

These countries are in a position to foot at least half the bill and reduce the pressure on Turkey. If, on the other hand, they are indeed helping Turkey in this regard, unbeknown to the public, then why is Ankara complaining about having been left alone to face the refugee problem?

Meanwhile Ankara continues to be cool towards the notion of a political settlement to the Syrian conflict if Assad is anywhere near the negotiating table, even if he is not actually sitting at it. Davutoglu’s lobbying for arms for the opposition also shows this.

He appears however not to be overly concerned of inflaming what is already a proxy war in the region by supplying the opposition with heavy arms against the regime.

Davutoglu conveniently overlooks the fact that if the opposition were to be armed the way he wants,  Russia and Iran, who continue to back the Assad regime as a strategic aim, as well as Shiite groups like the Lebanese Hezbollah, will do their utmost to counter this by increasing their military support for the regime.

Together with Prime Minster Recep Tayyip Erdogan, Davutoglu keeps referring to the plight of the Syrians suffering under Assad. He appears not to understand that supplying weapons to the opposition at this stage is a sure formula for prolonging the conflict and increasing the suffering of civilians.

Many in Turkey, and the region, would argue today that he does in fact knows all this, but a victory by the Sunni-led opposition in Syria has become such a strategic aim for the Erdogan government, that Ankara is willing to even see a proxy war, with increased suffering, if this is what it takes to achieve this aim.

Be that as it may, what is certain at this stage is that Ankara’s Sunni-led Syria policy has resulted in the emergence of a Shiite axis which does not look on Turkey and its policy towards the region with favor anymore. Turkey has in fact increased the number of its enemies and detractors in the Middle East since the outbreak of the Arab Spring, which contradicts Davutoglu's vision of a Turkey contributing to peace and stability in the region.

The problem for Davutoglu is that his academic world view — he is after a professor of international relations — is imbued with grand visions and perspectives for Turkey that have proved to be not just over ambitious, but also simplistic with regard to actual situations that have emerged on the ground.

For example he appears not to understand, or want to understand, that there is no choice left at this stage but to go for a political settlement for Syria if what is desired is to stop the bloodshed as soon as possible, and prevent the crisis from feeding growing sectarian divisions in the region.

Kadri Gursel has also shown, in his perceptive articles for Al Monitor, that Turkey is not immune either to the adverse fallout from sectarians divisions that have resulted from the Syrian crisis, having similar sectarian fault lines itself.

Meanwhile Turkey announced this week that it had apprehended the perpetrators of the car bomb attack last month at the Cilvegozu border crossing with Syria, which killed at least 14, and injured a large number of people. Government spokesman Bulent Arinc told reporters on Tuesday that Turkish security forces had “staged an operation worthy of films” to arrest four Syrians and one Turkish suspected of staging this attack.

Turkish officials say the perpetrators — who it appears were apprehended in a cross-border operation on Syrian soil — were linked to Syrian intelligence officials. True or not, it remains to be seen if Ankara will use this incident against the Assad regime also, in an attempt to sway the international community to arm the opposition.

The fact remains however that Turkey’s arguments on Syria have little traction left at this stage. Al-Monitor in its last “Week in Review” analysis headlined “The Iraqi and Turkish Fault Lines” summarized it well in its concluding remarks: “The signs of a trend toward a political solution deserve attention and priority, as the pursuit of a military solution means only more tragedy and destruction for Syria and the region.”

The sooner Erdogan and Davutoglu acknowledge this glaring fact and stop rowing against the current, the better it will be for Turkey, for the Syrian people, and for the region as a whole.