Semih Idiz writes about the state of judicial reform in Turkey. 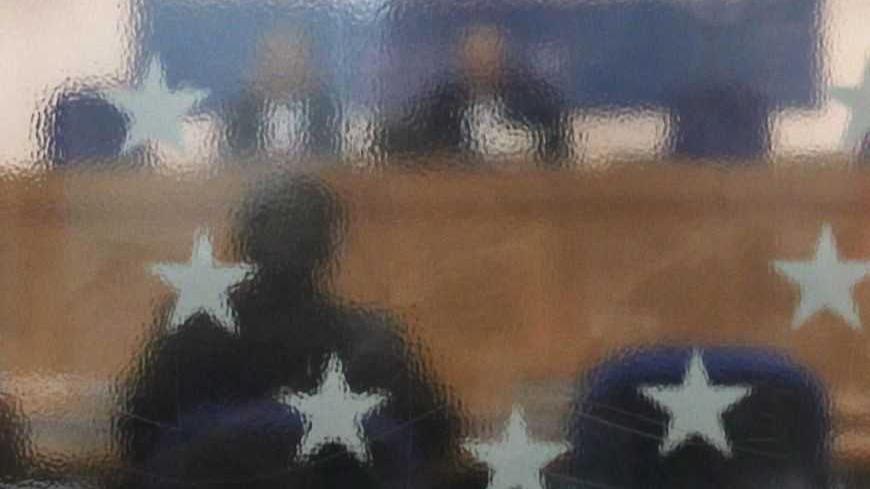 A session of the European Court of Human Rights, which has become a court of last resort for Turkish citizens despite efforts toward judicial reform, in Strasbourg, July 3, 2012. - REUTERS/Vincent Kessler

Judicial authorities in Turkey have always claimed to been sticklers for the rule of law. The quality of Turkish justice, however, has always been lacking, to put it mildly. Neither has the situation changed much under the ruling Justice and Development Party (AKP) led by Prime Minister Recep Tayyip Erdogan, even though it purports to be introducing “advanced democracy” to Turkey.

Erdogan’s own intolerance towards political opponents and detractors in the media is common knowledge at this stage. Meanwhile conservative prosecutors and judges, who also reflect a traditional intolerance in such cases, continue to interpret the Turkish penal code in the most draconian manner possible.

The latest example was reported on by the daily Hurriyet earlier this week. Two student protesters — Yildirim Beyazit Besim, 23, and Mert Deniz Ozkaya, 22 — are currently facing prison time for throwing darts at a picture of Erdogan. The prosecutor in the case, which is scheduled for June, is seeking a two-year prison sentence for the youths for “openly insulting a public official.”

In fact, the number of people charged, mostly under anti-terrorism legislation, for some “crime” that has a political angle, be they journalists, elected deputies, protesting students, human rights activists or environmentalists — with many languishing in prison — almost matches the number of people in a similar situation under military rule in Turkey in the past.

Inevitably, as many surveys indicate, there is a lack of public confidence in the legal system of the country. The significant numbers of Turks and Kurds who continue to seek justice at the European court of Human Rights (ECHR) attests to this fact. The government has introduced legislation enabling citizens to apply directly to the Constitutional Court for redress, if all other forms of legal recourse have been exhausted.

The aim is to reduce the number of applicants to the ECHR, where the ruling generally is against Turkey. But this new arrangement is not sufficiently tried and tested yet for the public to see that it works. Meanwhile, another case where a serious miscarriage of justice is suspected — and there are so many one does not know where to start — involves a young woman named Gulsum Koc, 21.

A court in the predominantly Kurdish city of Diyarbakir sentenced Koc to a life sentence in February for allegedly “disrupting the unity and integrity of the state,” “attempting homicide” and “harming public goods.” She was arrested and charged in connection with an armed attack on a police car in Bingol province, on May 15, 2011, in which a policeman was wounded.

Koc, who already had been in prison for a year when her sentence was read, was convicted on the testimony of a secret witness. This is a method frequently resorted to by the judicial system in Turkey, especially in cases with a political angle where anti-terrorism legislation is invoked.

If the High Court of Appeal upholds her sentence, she will serve 26 years and eight months in prison. The case, however, is marked with irregularities, including the lack of any forensic evidence linking her to the attack on the police car. The only evidence against her is the testimony of a secret witness, who reportedly saw her at the scene of the crime.

Koc, who was preparing for her university entrance exams at the time of her arrest, insists she is innocent, while her family is in deep shock waiting for the High Court of Appeals to rule on the case. If the conviction is upheld, she has the right to apply to the Constitutional Court, and if that fails to go to the ECHR.

But none of this will prevent this young women from languishing in jail in the prime of her life until the charges against her are thrown out for lack of evidence and the judicial irregularities, which legal experts say there is no shortage of in this case, are revealed.

This case also shows that the standard of evidence in advanced judicial systems, based on the principle of “beyond any reasonable doubt” simply does not exist in Turkey, where any doubt, reasonable or otherwise, is sufficient for a person to receive a life sentence.

Another case that has turned into a cause célèbre in Turkey is that of a sociologist Pinar Selek. Cengiz Candar, in his Jan. 28 article for Al-Monitor’s Turkey Pulse, headlined “Selek Case a Travesty for Turkish Judiciary,” spells out the details and glaring irregularities involved in that case.

Selek, who is also an activist on behalf of the dispossessed and marginalized elements of society, was arrested in connection with an explosion on July 9, 1998, in Istanbul’s Egyptian Market which killed seven people and injured 127. Selek spent two and a half years in prison before being acquitted for lack of any concrete evidence.

But that ruling was eventually overturned by a higher court, even though no new evidence had emerged against her. She was eventually retried and received life without parole on the basis of the flimsiest of evidence. It was almost as if the judiciary had turned this into a matter of honor and wanted her convicted no matter what.

Candar, whose article has all the detail pertaining to the case for those interested in it, concluded succinctly that “the Dreyfus case, which went down in history as one of the most notorious examples of judicial miscarriage, may seem like a joke compared to the judicial scandal that has rocked Turkey” as a result of the Selek case.

The Erdogan government has introduced what it refers to as the “Fourth Judicial Reform Package.” This is not only meant to do away with the kind of legal irregularities mentioned here, but also to reduce the number of application to the ECHR.

The package, which must be made the topic of a separate article, brings some advantages that will prevent zealous prosecutors from interpreting the Turkish Penal Code in subjective and draconian ways. But critics maintain that while it is a step in the right direction, it is hardly enough.

Like previous governments, the Erdogan government also appears unwilling to go for a wholesale reform of the judicial system in order to raise it to European standards that Turkey has to subscribe to as a candidate for membership in the European Union.

If adopted by Parliament, the “Fourth Judicial Reform Package” will enable the release of some of the thousands who are in prison today, charged under anti-terrorism laws, even if their alleged actions would not be considered a crime in “advanced democracies.”

This means there are more “judicial packages” to be worked out piecemeal by the government. In the meantime, neither Erdogan nor members of his cabinet appear overly worried about Turkey’s continuing negative human rights record.

Speaking broadly, however, no amount of reform packages will do away with judicial irregularities in Turkey unless the judiciary is educated into understanding what higher concepts of law such as “Habeas Corpus” or “beyond a reasonable doubt” mean. Until that happens Turkey, despite all its economic advances, will remain a second rate democracy, where true justice is the victim of subjective and often ideologically motivated interpretations of the law.