Turkey: No Country for Journalists

Semih Idiz writes that the Turkish government needs a sense of urgency to address the lack of press freedom. 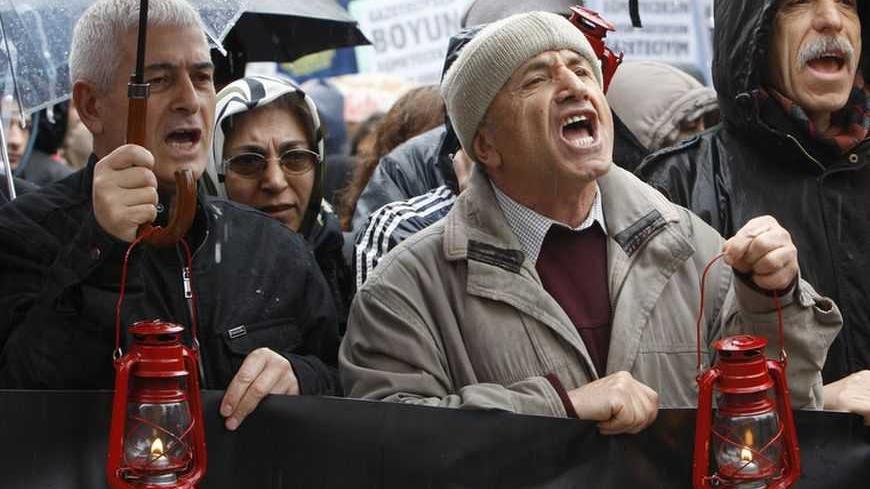 Journalists and their supporters protest the arrests of journalists in Istanbul, April 14, 2011. - REUTERS/Osman Orsal

The Paris-based media watchdog group Reporters Without Borders (RWB) characterizes Turkey scathingly in its latest roundup on the state of the international media as “the worlds biggest prison for journalists,” saying this is “a sad paradox for a country that portrays itself as a regional democratic model.”

It goes on to indicate that of the 72 mostly Kurdish media personnel currently detained, at least 42 are journalists and media assistants who are being held in connection with their media work. “The number of detained journalists is unprecedented since the end of military rule, but is not surprising given the Turkish judicial system’s structural problems,” it adds.

Military rule ostensibly ended in Turkey in 1983 following the 1980 coup d’état. The military’s ability to interfere and impose its will on the political domain, which could be felt until a few years ago, has also been ended by the Justice and Development Party (AKP) government headed by Prime Minister Recep Tayyip Erdogan.

While this development has been widely hailed in the West, reports such as the one issued by RWB, including similar reports — for example by the American watchdog group Freedom House (FH) — show not only that the lot journalists has not improved, but also that press freedom has regressed in Turkey in recent years.

In the RWB report, Turkey is 154th among 179 countries in terms of press freedom, trailing behind Afghanistan, Iraq, Uganda, Congo, and Brunei. RWB blames “very repressive legislation with broad and vaguely-worded provisions that allow all kinds of excesses, and markedly paranoid judicial attitudes that prioritize security concerns to the detriment of defense rights and freedom of information.”

The Turkish judiciary, under military or civilian rule, has traditionally been draconian when the specter of separatist or fundamentalist terrorism is raised. But what strikes one here is the total lack of genuine commitment on the part of the present government to enhancing freedom of the press, despite Erdogan’s often repeated claim to be working for introducing “advanced democracy” to Turkey.

As RWB points out, only a complete overhaul of the anti-terrorism law, in line with the decisions of the European Court of Human Rights, and the repeal of about 20 repressive articles in the penal code will improve and enhance the freedom of press in Turkey.

The basic problem here is that Erdogan’s and the AKP’s understanding of what “freedom of expression” and “freedom of the press,” differ from how these principles are universally understood in advanced democracies.

Erdogan has frequently said — especially in connection with the Danish caricature crisis and similar crises later — that freedom of the press is not limitless. His personal attitude to media criticism, on the other hand, has been intolerant and hostile, as attested to by his frequent verbal attacks on the press, and the large number of court cases he has initiated against newspapers, reporters and caricaturists.

Put another way there is also Erdogan’s, and the AKP’s, Islamic morality, as well as the sensitivities resulting from this — which in many cases do not comply with the secular outlook — to contend with here.

As if the hounding of the media was not enough, Erdogan recently called on a historic and widely popular television drama series, depicting the palace intrigues in the harem of “Suleiman the Magnificent,” to be banned, saying it was sullying the country’s history. It was not clear if he was upset by the rendition of Ottoman history, or the scenes with overt or implied sexual content. It most likely was both.

Meanwhile, members of his government have not just been trashing reports by groups like RWB or FH, but also the EU Commission’s annual “Progress Report,” or the U.S. State Department’s annual human rights report, which highlight the same deficiencies in Turkey. Erdogan argues defiantly that these reports are willfully misleading because the journalists listed are held under anti-terrorism legislation, and not for activities to do with journalism.

He nevertheless surprised everyone recently by bemoaning the long time hundreds of military officers accused of plotting to topple the government have spent in prison, pending a verdict in their cases. Those in prison, including the former Chief of Staff Gen. Ilker Basbug, were also charged under anti-terrorism legislation.

Erdogan said enough time had elapsed and evidence collected to prove if these people are guilty or innocent, and so they should either be charged or released. His remarks caught many unexpectedly because he had provided strong moral support to those prosecuting these cases in the past.

Erdogan is probably concerned, in the lead-up to crucial local elections in March 2014, with the negative image of so many incarcerated ranking officers, while their court cases lumber on in an apparently open-ended fashion. Whether this new found sympathy by Erdogan for the detained officers will extend to the journalists named by RWB in its report remains to be seen, of course.

What makes this question even more interesting is that two of the journalists in the RWB report — who have been in prison now for a number of years — are also accused of conspiring together with the military officers to overthrow the government. Like the officers being tried neither Mustafa Balbay nor Tuncay Ozkan has received his verdict yet, and there is no end is sight for them.

There are some signs that the negative international attention the condition of journalists and the regression in press freedom in Turkey is attracting may be forcing a change in the government’s attitude to this issue, too. During a recent news conference in Brussels Minister for Justice Sadullah Ergin repeated the claim that the majority of detained journalists were in prison under anti-terrorism legislation, or for other criminal acts, and not because they were doing their jobs.

He nevertheless conceded that there are certain legal stipulations in the penal code which are obstructing the freedom of press. Ergin said demands were being made, “which he fully understood,” to make the language of these stipulations more concrete in order to prevent subjective interpretations.

He added that his government was working on a “fourth judicial reform package,” to be submitted to parliament soon, which would address many of the shortcomings being mentioned today, and said his government “would continue to fulfill its responsibilities towards press freedom in Turkey.”

As RWB points out in its latest report, however, the so-called “third judicial reform package” adopted in July 2012, had resulted in the conditional release of around 15 journalists, some of whom had been in prison for years, but their cases were only suspended. Meanwhile, that reform package did not do much for the large number of journalists still waiting to be released.

It also remains to be seen, therefore, whether “the fourth judicial reform package” will address the issue of freedom of expression in Turkey as it should, and bring the relevant legislation in line with EU standards – which Ankara has to do anyway for the sake of its EU bid.

It is not enough for the government to say “it is working on the matter,” while hundreds of people languish in prison with no indication as to when it will all end. It also has to demonstrate a spirit of urgency towards this matter, and also show that its heart is in it.