Egypt’s new draft anti-terrorism law is not sitting well with journalists, who claim the law is unnecessary and violates the rights of the Egyptian people. 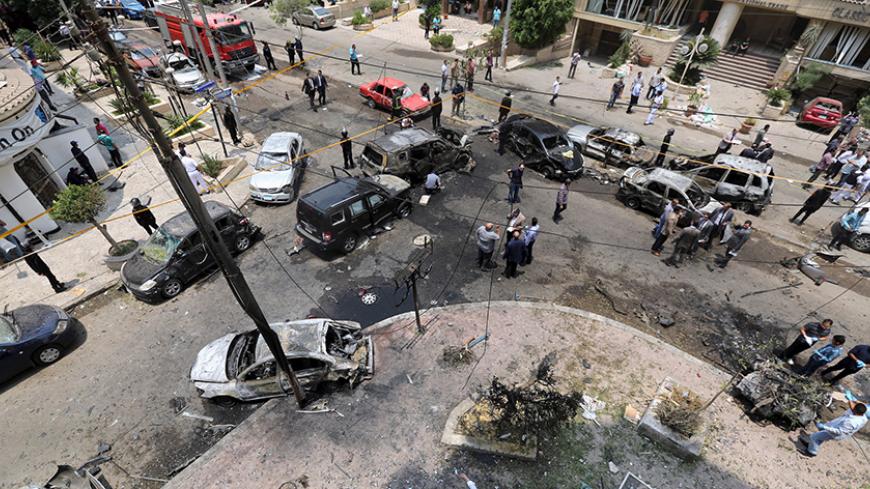 Burned cars litter the site of a car bomb attack on the convoy of Egyptian public prosecutor Hisham Barakat near his house at Heliopolis district in Cairo, June 29, 2015. - REUTERS/Mohamed Abd El Ghany

CAIRO — Egypt’s proposed anti-terrorism law continues to stir up controversy under the critical eye of journalists and human rights groups who say it violates the constitution and seeks to squelch freedom of the press.

Khaled el-Balshi, a board member of the Egyptian Journalists Syndicate, called certain articles in the proposal “shameful.” Members of the press have submitted proposed amendments to those articles, and the government expects to complete its deliberations within a few days, after which the legislation will be submitted within a week to President Abdel Fattah al-Sisi for approval.

The government seeks rapid enactment of the legislation, which it says is necessary after a recent series of attacks. The June 29 assassination of Egypt’s top public prosecutor, Hisham Barakat, by a car bomb attack on his convoy, the subsequent terrorist bombings and the terrorist attack that occurred in conjunction with a number of ambushes in northern Sinai that killed 17 recruits have driven the Egyptian government to expedite the proposal.

“The arm of justice is chained by the law. We’re going to amend the law to allow us to implement justice as soon as possible,” Sisi told the Egyptian people June 30.

As an official decision grows closer, a societal rejection of the articles also has started to emerge. On July 7, 17 human rights organizations and centers rejected the proposed law in a joint statement, calling it “a blatant violation of the constitution.”

The law “turns journalists into mere conveyors of the state’s official data,” Gamal Eid, executive director of the Arabic Network for Human Rights Information (ANHRI), told Al-Monitor. The main feature of the draft law is the clear disdain it shows toward well-established constitutional and legal values, he said, adding that it makes light of the freedom of the press, knowing that the latter mirrors the community.

On July 5, the Egyptian Journalists Syndicate rejected the proposed law, which it says “is a clear violation of the current constitution’s provisions.” The syndicate added, “It reinstates the restrictions that the union has fought to annul for decades.”

Articles 26, 27 and 29 of the anti-terrorism proposal bring back the prison penalty for journalists, which is contrary to current provisions of the Egyptian Constitution. Article 37 takes away the freedom of the press, prohibiting any individual or party from photographing or recording court sessions or publishing such information through broadcasts, print media, social media or any other means.

Prime Minister Ibrahim Mehleb met July 8 with the heads of Egyptian newspapers and the Egyptian Journalists Syndicate to discuss the syndicate’s demands and reasons for rejecting the draft law. Mehleb said during the meeting that the draft is not designed to constrain journalists; rather, it aims to hold accountable those who harm or intend to harm Egypt’s national security.

Balshi said the syndicate submitted its proposed amendments July 11 along with a demand to abolish Article 33.

“The Egyptian penal code includes enough articles to counter terrorism, and we do not need a new law,” Balshi said. “In case there is insistence on passing the current [draft] law, it should be in accordance with the constitution, and the demands of the various human rights organizations and Supreme Judicial Council should be taken into account.”

Balshi also said terrorism cannot be countered with emergency laws. Defying terrorism requires a culture that involves the community in general, the renewal of religious discourse that is long overdue, a climate of justice and the provision of rights and freedoms — namely, building a state based on justice and freedom, he said.

Eid, of ANHRI, analyzed the timing of the law’s issuance. He said, “The draft law should not be assessed apart from the general context surrounding it. It came as a reaction to the public attorney’s assassination and the terrorist attack in Sheikh Zuweid in order to contain the public anger. [The draft law] was not discussed with the political parties or civil society organizations, and the legislative authority is limited to the president since he took office because of the repeated postponement of parliamentary elections.”

He added, “This anti-democratic-rules climate turns the new draft law into a law that confiscates public freedoms, most notably the freedom of the press. Moreover, the criticisms, which were expressed by those working in journalism, [the] union of journalists and civil society organizations, call on all those interested in the press and journalism to adopt a serious and unified position against this draft law.”

On July 8, the ANHRI published a chart on its website with the articles it considers inadequate, as well as proposed amendments in preparation for its submission to the Ministry of Transitional Justice. It will then be referred to the legislative affairs branch of the State Council in order to conduct the legal revision in light of these remarks.

The Supreme Judicial Council announced July 5 its rejection of three articles and demanded that the legislative affairs branch of the State Council re-examine them one more time. It added in a statement that it has issues with articles 48, 50 and 51.

“The anti-terrorism law includes two aspects, a procedural and a substantive aspect,” said Mahmoud Kbeish, former dean of the faculty of law at Cairo University and criminal law professor. He told Al-Monitor, “If one looks at the substantive aspect, which is related to the crimes and punishment, [one realizes that Egypt] is not in an urgent need for it at this stage. The criminalization and punishment are mentioned in the Egyptian penal code, which includes the necessary articles and paragraphs.”

Kbeish added, “If we look to the procedural side, which is related to the legal procedures regarding the perpetrators of terrorist crimes, we [realize] that we are really in need of some of these paragraphs. Yet, there are various remarks on the paragraphs formulated in the anti-terrorism law, for these lack proper legal phrasing that goes in line with the constitution and international covenants.”