What's next for Egypt's journalists?

In an interview with Al-Monitor, Khaled El-Balshy, the head of the Freedom Committee of the Journalists' Syndicate, says that he believes the Egyptian security forces are facilitating the insults and abuses journalists have been subjected to. 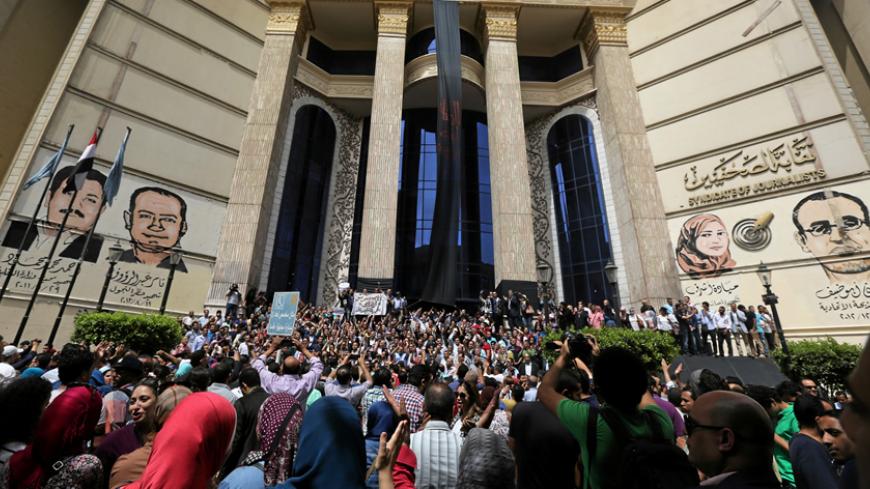 Journalists protest against restrictions on the press and to demand the release of detained journalists, in front of the Journalists' Syndicate in Cairo, May 4, 2016. - REUTERS

CAIRO — On May 1, and in a historic first, security forces stormed the Journalists' Syndicate to detain and arrest journalists Amr Badr and Mahmoud El-Sakka. Subsequently, following demonstrations by hundreds of journalists chanting “Journalism is not a crime” in front of the office of the attorney general, an emergency meeting was held by the General Assembly of the Journalists' Syndicate on May 4, which resolved to boycott all news relating to the interior minister, publish his photo in a negative context only and call on the presidency to apologize to all journalists for the storming of the syndicate's office.

The head of the syndicate’s Freedom Committee, Khaled El-Balshy, who took part in drafting these General Assembly resolutions, spoke with Al-Monitor about the repercussions of the syndicate’s woes with security agencies and the problems faced by the Egyptian press at what he calls a critical stage.

Al-Monitor:  Why have many journalists called on the presidency in particular to apologize for the storming of the syndicate's office?

El-Balshy:  The assembly considers the entire regime responsible for violating the syndicate’s sanctity, and not just the security forces. What really offended journalists was the siege imposed around the General Assembly during its meeting, with roads closed and thugs mobilized to assault journalists. As such, what occurred went beyond a mere security decision. The assembly’s resolutions were drafted in such a way as to include calling for an apology from the government, but attendees insisted that the apology come from the presidency.

Al-Monitor:  What is your opinion about the president ignoring the crisis during his speech that preceded the assembly’s meeting?

El-Balshy:  The ongoing violations targeting journalists cannot endure without the knowledge of the head of state. These acts are systematic and the entire regime is responsible for them. Claiming ignorance and failing to intervene to resolve them is — in my opinion — tacit approval to say the least.

Al-Monitor:  Why did the syndicate decide to publish the interior minister’s photos in a negative context, instead of simply resolving to refrain from publishing his name?

El-Balshy:  The purpose was to show that he was the minister who attacked the freedom of the press. It also served to express the anger of journalists against his conduct. I reject the decision being characterized as harassment, for journalists are the ones who were truly harassed.

Al-Monitor:  To what extent do newspapers abide by the syndicate decisions?

El-Balshy:  Approximately 80-90% of the newspapers adhered to the decision, for all the newspapers have representatives who voted for the assembly's resolution. As for Al-Ahram newspaper, the issue went beyond noncompliance to reach the level of deception and the inaccurate conveyance of events at the assembly. Attendance was in the thousands, while the newspaper reported that a small number of people attended, intimating that the syndicate's General Assembly was a fiasco.

Al-Monitor:  What does the syndicate expect from the parliament in this regard?

El-Balshy:  We are in contact with journalist lawmakers in parliament. They have put forth proposals relating to the crisis and can use their parliamentary tools such as hearings and summons in that regard. We shall support their efforts as long as they serve syndicate interests and comply with General Assembly resolutions.

Al-Monitor:  Are there anti-regime forces that are exploiting the syndicate’s crisis with security forces?

El-Balshy:  The syndicate stated that it rejects all attempts to exploit the General Assembly and has issued a decision calling for an investigation of a few Muslim Brotherhood-affiliated satellite channels broadcasting the assembly proceedings live. But I refuse to focus on this matter at the expense of the more important issue of journalistic unity.

Al-Monitor:  How do you respond to accusations that the syndicate’s board exploited the crisis for electoral purposes?

El-Balshy:  Does fending off such accusations require that we remain silent vis-a-vis the trespasses being committed against journalists? If that were the case, then I would not want to win the elections. We are tasked with defending the rights of our colleagues, and what we are currently experiencing seems to be an attempt to silence us — which will never happen.

Al-Monitor:  What escalatory steps will the syndicate take if the state refuses to respond to the General Assembly resolutions?

El-Balshy:  We may go on a general journalists' strike or refrain from publishing or editing. These are proposals to be discussed by the next assembly.

Al-Monitor:  How do you characterize the conduct of some of the president’s supporters gathered around the syndicate?

El-Balshy:  They have assaulted 15 journalists. This conduct is systematic and not isolated. Under the protection of the security forces these people gather daily to hurl insults at and perform acts of aggression against journalists, while the same security forces prevent journalists from entering the syndicate.

Al-Monitor:  Are you accusing the security forces of complicity in facilitating the carrying out of such abuses?

El-Balshy:  I am certain that the security forces are complicit with them against journalists, and we have filed formal charges in that regard with the office of the prosecutor general.

Al-Monitor:  What is the syndicate board’s stance vis-a-vis journalists with close ties to the security forces?

El-Balshy:  The Journalists' Syndicate is predicated on diversity. Members are completely within their rights to consider our position erroneous. What is more important is to focus on the wider picture and abide by the decisions of the General Assembly. But journalists who work against their syndicate and violate the law and the Charter of the Press shall be subject to sanctions as per the bylaws of the syndicate.

Al-Monitor:  How do you respond to accusations that the syndicate harbored fugitives?

El-Balshy:  People espousing said position based it on a distorted view of events and people judge issues in the context of the information at their disposal, their culture and personal interests. We seek to enforce the law, not violate it. We want to stop the violations of the law and the constitution perpetrated against journalists. We therefore defend the right of our colleagues to remain free and not be subjected to assault. We defend their right not to be tortured during or after their arrest.

We were not informed of the decision to apprehend Amr Badr and Mahmoud El-Sakka when the latter sought refuge at the syndicate's office. Their lawyers came and we began contacts to have the arrest warrant enforced in the context of safeguards guaranteeing their rights. The storming of the syndicate was a violation of the law; we are keen on enforcing the law and we seek the establishment of a state of law.

Al-Monitor:  How do you view the call made by the “Rectify the Course” front to withdraw confidence from the syndicate’s board?

El-Balshy:  They have the right to do whatever they deem appropriate. The doors of the syndicate are always open for them to meet, and if they succeeded in having confidence withdrawn from the current board, then that would mean that we erred and must resign immediately.

Al-Monitor:  What obstacles do journalists face in Egypt while performing their jobs?

El-Balshy:  The 2015 report of the syndicate's Freedom Committee recorded 782 violations against journalists, ranging from arrest [29 journalists are currently incarcerated], destruction of equipment, barring the publication of articles by 14 journalists and barring people from practicing the profession, as well as other obstacles faced by institutions such as barring their publication, prohibiting them from printing newspapers and storming their head offices.

Al-Monitor:  What are the types of charges that led to the incarceration of journalists?

El-Balshy:  There are 22 cases related to practicing the profession. Some colleagues have been charged with criminal offenses and accused of belonging to banned organizations despite their holding journalist credentials and carrying press-related equipment — colleagues who have yet to be released. We must take into account that the investigative department at the Ministry of Interior is anti-press and is exercising added pressure on journalists.

Al-Monitor:  What is the ceiling beyond which freedom of the press may not go?

El-Balshy:  When it comes to freedoms, this is the worst time ever for Egypt’s press. Here I am not talking about individuals or institutions that cannot be criticized, for freedom of the press requires that journalists be free to act and that they be safe from assaults when they criticize a certain individual or institution. This has to be a collective act but the climate today is anti-criticism, with criticism barred against certain institutions such as the army. Currently the judiciary is attempting to afford itself the same type of immunity from criticism; we are facing a reality where journalists must — each within their own capacity — confront the institutions about which they write.

Al-Monitor:  What is your opinion about the Unified Draft Law on Regulating the Press and Media?

El-Balshy:  The law satisfies 80% of the aspirations of journalists. Said ratio differs from one journalist to the other, and the provisions relating to freedoms favor the rights of journalists. I have reservations, though, about some provisions relating to the press sector, whereby the law failed to advance a mature stance vis-a-vis the electronic press, despite the latter being a natural progression of our profession.

Al-Monitor:  To what extent do some state agencies control press institutions?

El-Balshy:  Of course some state agencies do control press institutions, for censors are again stopping printing presses due to certain materials that they object to. Such control is detrimental to the profession and to creativity, as restrictions create apprehension in the minds of journalists. A climate of freedom, on the other hand, is positively reflected on newspaper distribution, for — after the January [25] Revolution — many newspapers were being published and distribution was immense. But professional standards and distribution levels diminished when the press devolved into several similar versions of a single newspaper, with employment conditions markedly deteriorating for journalists.

Al-Monitor:  When will e-journalists be allowed membership in the Journalists' Syndicate?

El-Balshy:  We are working on drafting a new law that would recognize them. One of the key recommendations of the syndicate’s fifth congress was to work toward having them included. I hope to see the law amended this year.