Why some are worried about Egypt's new media law

Egyptian parliament has passed a new media law that places further restrictions on the press, as some argue Sisi’s reign has become the “worst ever” for freedom of speech. 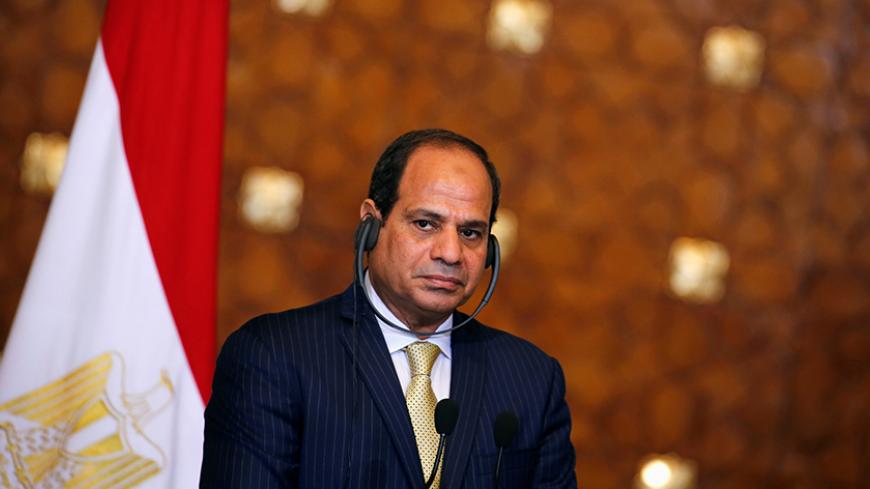 “I want to tell you that we’ve been concerned with controlling the media from the very first day the army took over power in 2011,” Egyptian President Abdel Fattah al-Sisi is heard saying in an October 2013 leaked video.

“Tell me how do you suggest I terrorize them?” Sisi asked one of his officers. Three and a half years into power after the toppling of President Mohammed Morsi and taking charge of the country, Sisi’s Egypt is witnessing the harshest crackdown in the 200-year history of Egyptian media. Repression, destruction of equipment, imprisonment and even death surround the profession.

Last week, the parliament passed a law on the “Institutional Regulation of the Press and the Media,” which indicates creating three regulatory bodies to oversee all of Egypt’s media outlets. Sisi himself is to select the heads of these boards, according to Article 32.

One body is to supervise state-owned press organizations and select their board chairmen and editors, another would oversee state-owned audio-visual media, radio and digital media institutions, and last and most crucial, the Higher Council for Media Regulation will regulate all media outlets, audio-visual, digital or print — whether public or private — in coordination with the other two bodies.

The law ignores Article 72 of the Egyptian Constitution that indicates “the State shall ensure the independence of all state-owned press institutions and media outlets, in a manner ensuring their neutrality and presentation of all political and intellectual opinions,” Yehia Kallash, the head of the Egyptian press syndicate, told Al-Monitor.

“The law also neglects an initiative to abolish freedom-stripping punishments over publishing cases, which raises concerns around the affiliations of those who put the law together,” Kallash added.

Kallash had asked for a draft of the law and to give the syndicate time to review it, but the request was ignored.

“There was willfulness from parliament to dismiss the conversation with the syndicate. Paradoxically, I spent three years working on this law, most of the time alongside the government. At its last stop, it goes out in this deformed version,” said Kallash.

Khaled el-Balshy, the head of the syndicate’s Freedoms Committee, criticized the law further. “The new law is a consecration to the current [pro-state] media dominance. … It opens the door for further corruption,” he said. Membership of the boards has no regulations or legal restrictions, and articles prohibiting the monopolization of the media have become ambiguous, he believes.

This serves both the state and businessmen who work closely with it. One example would be Sisi supporting businessman Abu Hashima, who bought three mass-viewed TV channels: ONTV, CBC and Al Nahar. Such private media is already tainted with state mouthpieces — some with a security background.

“[The law] shows an intention by the government to further suppress press freedoms, given the wide powers delegated to the government in the formulation of the councils that organize media affairs. Also, it seems that these councils will also have more controlling and regulatory powers than organizational powers, especially with the clause ‘monitoring the legality of the sources of funding for media outlets,’” she said.

The newly passed law joins an “anti-terror” one, which Sisi ratified in August 2015. The latter bans media from reporting on nonofficial statistics, or “false” reporting, on militant attacks or security operations against militants. Those who stray from government statements are subjected to a fine of up to 500,000 Egyptian pounds ($26,000), and courts could prevent the convicted from practicing the profession for up to a year.

“There is a difference between organizing media and fettering it,” syndicate head Kallash stressed.

Yet journalists are literally fettered. There are currently 63 journalists and members of the media behind bars in Egypt’s prisons; 58 of them were arrested following the ouster of Morsi. Many of those locked up have exceeded the legal two-year period of pre-trial detention. Since the ouster in July 2013, nine journalists were killed during the course of their work, according to the international watchdog Committee to Protect Journalists, which placed Egypt as the third country in the world with the highest number of jailed journalists in 2016. Journalists have not escaped the reach of military trials as well.

On May 1, 50 armed men attacked the syndicate, recalled Amr Badr, editor-in-chief of news website Yanair Gate. The website decried the giveaway of two Red Sea Islands to Saudi Arabia, which the High Constitutional Court later ruled against. Viewership had hiked up, its reach and effect bothering authorities, Badr believes. He and journalist Mahmoud al-Saqa were arrested from inside the premises.

The initial accusation was “inciting protests through publishing,” over which Badr said, “We are journalists; publishing is what we do,” pointing to how insensible the charge was. “And how could we incite people to do something legal? Protesting is constitutional,” he added, saying that “the accusation befits tyrannical states.”

“Our authorities regard freedoms as a luxury,” Badr told Al-Monitor.

Meanwhile, Kallash, along with Balshy and another deputy, received two years in prison for “harboring” Badr and Saqa at the syndicate.

Shams El-Din expressed her anxiety about the future of free and independent press, especially online, which she believes is in extreme danger. “Online media and the internet is the last free and democratic space in this country; controlling it means controlling our last resort.”

Not only has Egypt blocked access to websites such as the New Arab and condemned others like Middle East Eye, but it formed what are known as ‘”digital committees.” Digital security consultant Wael Eskandar explained how these online armies function.

“[People] are paid money; they create fake accounts and fill the internet with a certain message. They are effective at filling cyberspace with whatever message, or propaganda, so that someone who doesn't know much about the topic will find difficulty finding out what's true and what's false. Having a unified message echoing across cyberspace gives the illusion of wide consensus,” he said.

The internet is surveilled for dissent. In 2014, the Ministry of Interior developed a system for “monitoring security threats on social media and public opinion.” Numerous arrests have occurred over opposition posts, the most recent being 24-year-old Sayed Gad. He is accused of the “misuse of social media.”

“The Egyptian press has always dealt with dictatorships restricting its freedom. But the level of repression is currently at its worst ever,” Balshy maintained.

However, the future of press freedom is not hostage to current procedures, Balshy claimed.

Former President Gamal Abdel Nasser had attempted nationalizing the syndicate, his successor Anwar Sadat wanted to convert it to a club, and Hosni Mubarak and Morsi strived to control it, all in vain, he narrated.

“The press shall always win the battle for freedom,” Balshy concluded.