In an interview with Al-Monitor, head of the Journalists' Syndicate Yahya Qalash speaks of the syndicate’s problem with the state, the new media law and the media regulators law. 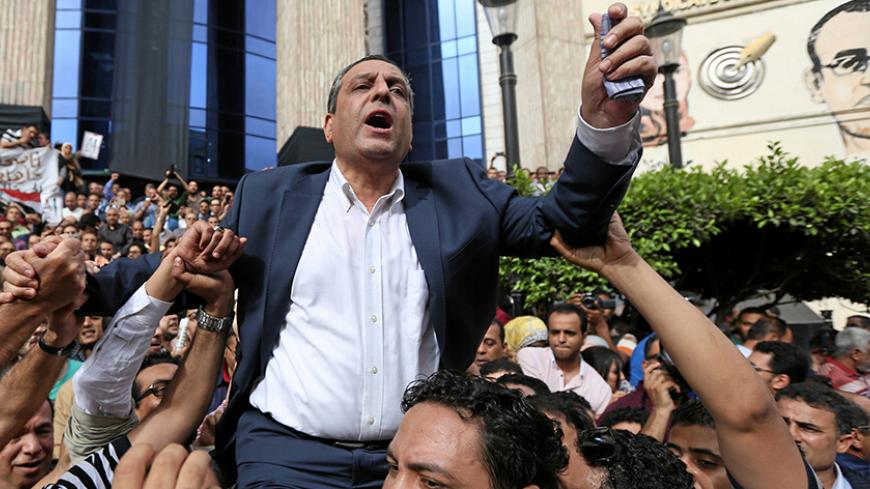 Journalists carry Yahya Qalash, head of the Egyptian Journalists' Syndicate, during a protest against restrictions on the press and to demand the release of detained journalists in front of the syndicate's headquarters in downtown Cairo, Egypt, May 4, 2016. - REUTERS/Mohamed Abd El Ghany

CAIRO — The Qasr al-Nile minor offenses court in Cairo issued on Nov. 19, 2016, a nonconclusive ruling sentencing the head of Egypt's Journalists' Syndicate, Yahya Qalash, and board members Gamal Abdel-Rahim and Khaled el-Balshy, to two years of hard labor in prison on charges of “harboring fugitives from justice” in the syndicate’s building. They must further pay 10,000 Egyptian pounds (roughly $530) to stay the execution.

The ruling, which observers characterized as unprecedented, caused a stir inside and outside the syndicate. The Egyptian government was harshly criticized by organizations advocating human rights, freedom of speech and freedom of the press. On Nov. 19, the Committee to Protect Journalists issued a statement calling on the Egyptian authorities to drop charges against Qalash, Abdel-Rahim and Balshy.

In an interview with Al-Monitor at the Journalists' Syndicate building in Cairo Dec. 7, Qalash spoke of the syndicate’s problem with the state, which was ignited May 1 when security forces stormed into the syndicate’s building for the first time since the syndicate’s inception decades ago. Journalists Amr Badr and Mahmoud al-Saqa, who were staging a sit-in there, were arrested after security forces had broken into their homes for expressing their opposition to the Egyptian-Saudi maritime border demarcation agreement signed on April 8, 2016, under which Egypt ceded the Red Sea islands of Tiran and Sanafir to Saudi Arabia.

Qalash also talked about media law No. 92 of 2016 ratified Dec. 27 by President Abdel Fattah al-Sisi, and the situation of journalists, in light of Egypt’s political, security and economic turmoil.

Al-Monitor:  How did you receive the news on the ruling?

Qalash:  The ruling came as a shock to everyone. No crime was initially committed for us to receive such a harsh sentence. These things happened because we are defending our syndicate and its members. The imprisonment sentence is a cheap price to pay for defending the syndicate and preventing the storming in the future.

Although we are not the suspects, police officers stormed into the syndicate’s building in May 2016, in violation of the law. We want the law to be implemented, not violated. We also want the law and the constitution to stop being violated, and violations committed against journalists to cease. We are defending our colleagues’ right to not be arrested or assaulted.

We didn't know that there was an arrest warrant against Badr and Saqa, when they resorted to the syndicate. Their lawyers arrived, and they were taken to the general prosecution for interrogation in the presence of their lawyers, in light of guarantees protecting their rights. The storming into the building was a violation of the law. We are keen for the law to be implemented and we aspire to a state of law, not the opposite. We will continue on the judicial path, considering that it is a nonconclusive ruling, and that another court will be examining the case. We expect the judiciary to find us innocent, because we aren't criminals.

Al-Monitor:  What do you think about Sisi’s Nov. 22 statement on [Portugese TV and radio station] RTP, where he said that this is a criminal case related to harboring fugitives at the syndicate’s building, representing a violation of the law, and has nothing to do with the freedom of opinion?

Qalash:  Sisi’s statement was probably based on information he received from some quarters. Yet the facts say otherwise. It is not a crime that journalists resort to the syndicate building. Dozens of similar cases happened in the past, most notably in 2008 when journalist Abdel Jalil al-Sharnoubi — a former editor-in-chief of Ikhwan online, the Muslim Brotherhood’s official website — staged a sit-in in the syndicate’s building for more than 45 days. Yet back then, [security forces] did not storm into the building as happened in May, although he was wanted by the judiciary.

The information received by the president, and his statement on an international platform, confirm that there is something wrong. The criticism against the freedoms dossier sparked more controversy abroad than at home. We are not standing in a confrontation with the authority or the regime; rather, we are defending the syndicate, which is a state institution and part of the community.

Al-Monitor:  On the eve of the ruling, you said there is a bigger crisis at the Journalists' Syndicate board. What is the nature of the crisis?

Qalash:  The syndicate is facing major challenges that the board alone cannot face. The press in Egypt is facing a crisis with the state. Dozens of journalists are in prison. This is in addition to the new media law that parliament was discussing, and the unprecedented ruling in this case. These crises require that the journalists’ general assembly backs up the syndicate’s board in facing it.

Al-Monitor:  How did the syndicate respond to the ruling that was followed by an emergency meeting Nov. 23?

Qalash:  The syndicate’s general assembly met, and nearly 1,300 senior and junior journalists and authors attended. They put forward many ideas and proposals that we will implement in the future, most notably the formation of three committees to discuss all problems and issues related to journalism. The first is on the social and economic conditions, the second is on the freedoms and cases related to our detained colleagues and the third is on the media legislations. I believe that it is a successful meeting that has a direct, balanced and conclusive message.

Al-Monitor:  What do you want to say about the new media law?

Qalash:  The new law does not reflect the idea of the independence of the press and media institutions from the executive branch, which was targeted in the 2014 constitution. We wished that the syndicate and parliament had agreed on it before submitting it to the president, just as the government and syndicate did during the three-year preparation.

We sought to organize press and media regulatory agencies by drafting a law based on the constitution, but the new media law was ratified without being subject to any consensus or social dialogue.

In mid-November 2016, the government submitted to parliament two separate draft laws based on the recommendation of the State Council, the judicial authority that reviewed the media draft law, to divide the unified law. The Journalists' Syndicate wanted to keep the law in its unified form, but the parliament disregarded its request and approved two draft laws — the media regulators law on Dec. 19 and the media law on Dec. 27.

Al-Monitor:  Does the media law strengthen the powers of the executive power branch?

Al-Monitor:  In your opinion, what is the purpose behind the control of the press and the media?

Qalash:  This has been an approach and an inclination adopted by the state for a long time now. The state has always sought to dominate the media and the press. We believed that the constitution of 2014 would be a quantum leap, but the media law passed without taking into account the constitution. [It] further consecrated the regime's authority over the media. This reveals the inclination by the specific services within the state to control the media.

Al-Monitor:  Some observers believe that the Journalists' Syndicate board was divided after the storming of the syndicate.

Qalash:  We previously denied any divisions. The storming of the syndicate building shows that betting on a split within the ranks of the syndicate’s board or its general assembly is a losing bet. I believe history has shown that whoever tried to undermine the unity of journalists has failed.

Al-Monitor:  What are the difficulties facing journalists in Egypt while doing their job, and what is the role of the syndicate?

Qalash:  Journalists face numerous difficulties when performing their job. The journalism market in Egypt is distorted and chaotic. There are old legislations — dating back to more than half a century — that have not been amended and that do not keep pace with modernity and the breadth and depth of this profession. This is in addition to the lack of experience by young journalists who work in the field.

The report by the freedoms committee at the Journalists' Syndicate on the profession’s status in 2015 — which was issued in February 2016 — noted 782 violations against journalists at the rate of 2.1 violations per day. Violations ranged between detention — 29 journalists and trainees under arrest in prisons — smashing of equipment, prevention of publication of articles for 14 writers and a ban to practice the profession. This is in addition to other obstacles faced by [press] institutions such as the prohibition of publication and the printing of newspapers — not to mention the storming of the syndicate’s building. The syndicate tried to address those problems by exerting pressure for the issuance of new legislation that keeps pace with the profession’s developments and called on press institutions to hold highly efficient training sessions for its editors and to register them with the syndicate and notify the syndicate accordingly.

I would like to note that the syndicate submitted on Nov. 2 to the committee that Sisi had formed — by virtue of a presidential decree following the National Youth Congress held in October 2016 to follow up on the cases of youths detained on protest-related charges — a list of 26 detained journalists, 13 syndicate members and 13 trainees, including prominent photographer Mahmoud Abu Zeid, also known as Shawkan. Amnesty International had previously called for the release of Shawkan. The syndicate was hoping that the detainees whose names are on this list would be included within the second group that the committee intends to release. On Nov. 18, the committee had managed to obtain a presidential pardon for a group of 82 detained journalists.

Al-Monitor:  When will cyber journalists become members of the Journalists' Syndicate?

Qalash:  Unfortunately the law governing the syndicate dates back to more than half a century and it links the journalist’s job to printing means and does not recognize journalists working in cyberspace. But the 2014 constitution — which I believe is one of the best constitutions that safeguards freedom of the press — recognized their rights. We hope this would be reflected in the unified law. A journalist delivers content — whether in cyberspace or on paper. The definition of the term journalist in the law must be changed and should not be restricted to printing means.

Al-Monitor:  Is the regime controlling the media landscape? How do you see the businessmen's influence of the media?

But I assure you that the press can only survive if it has freedom, and we will continue to strive to implement the provisions of the 2014 constitution that safeguard the rights of the profession of journalists.