After police raided the Press Syndicate May 1 and arrested two journalists, even the state-run daily Al-Ahram condemned the move — but what does this mean for the future of Egyptian media? 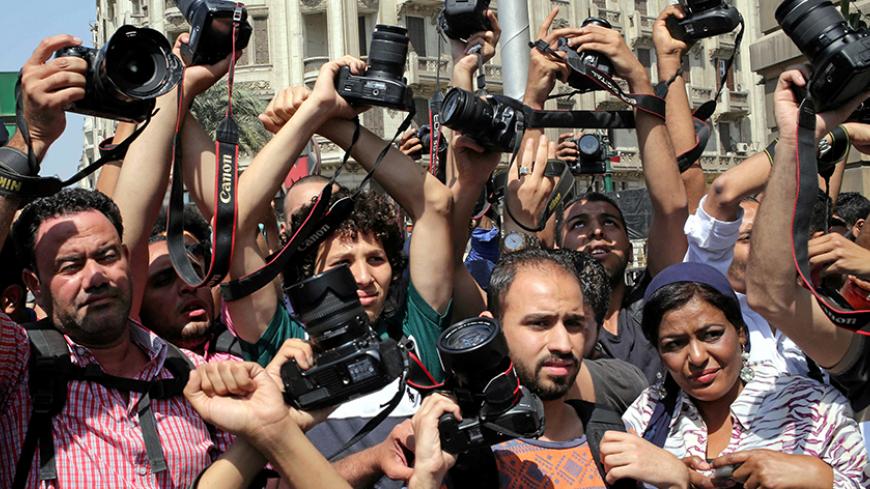 Egyptian journalists hold up their cameras during a protest against the interior minister following the arrest of colleagues for covering anti-government demonstrations, outside the Egyptian Press Syndicate in downtown Cairo, April 28, 2016. - REUTERS/Mohamed Abd El Ghany

CAIRO — On May 1, just two days before World Press Freedom day, Egyptian police raided the Press Syndicate in Cairo and randomly detained a number of journalists as they were working. This measure against media workers represents a dangerous escalation in the security services’ campaign targeting journalists in a country that the Committee to Protect Journalists describes as “among the world’s worst jailers of journalists.”

The crisis between journalists and the security services escalated against the backdrop of April 25 demonstrations protesting the maritime border demarcation agreement that included handing over control of Tiran and Sanafir islands to Saudi Arabia. The security forces had prevented journalists and photographers from covering the protest, and 46 journalists were arrested that day. Members of the Press Syndicate board were also intimidated by groups of pro-government thugs who attacked and surrounded the syndicate’s headquarters and prevented journalists from entering the building April 25.

In response to the random arrests and intimidation faced by journalists, the Press Syndicate and journalists filed a total of 17 motions with the public prosecutor against the interior minister and head of the Cairo Security Directorate. In addition, on April 28, protesters organized marches in which they carried pens and cameras and headed toward the office of the public prosecutor with signs that read “Journalism isn’t a crime,” condemning the police’s recent actions against journalists.

Yet despite the journalists’ "uprising" against these detentions and random arrests, police campaigns targeting them continued. During the May 1 raid on the Press Syndicate, security forces arrested Amr Badr, editor-in-chief of the privately owned online news site Yanair Gate, as well as Mahmoud al-Saqa, a journalist for the same outlet. At the time of their detention, they were participating in a sit-in at the syndicate to protest against the storming of their homes by security forces last month and accusations they face of inciting protests against the state.

Just hours after the raid and arrests, hundreds of journalists headed toward the Press Syndicate headquarters to protest the measures. The syndicate’s board held an emergency meeting at 2 a.m. May 2, which ended with a demand for the resignation of the interior minister, a call for an open-ended sit-in and an emergency meeting of the syndicate’s general assembly on the afternoon of May 4 to consider the decisions they should take to maintain the dignity of the journalism profession.

In a statement issued following the emergency meeting, the board noted, “The calamity of the aggression against the syndicate's headquarters — in violation of the law, the constitution and all political, national and international norms — can't be erased without the dismissal of the interior minister."

Yehia Qalash, head of the Press Syndicate, told Al-Monitor, “There are several legal tracks and measures the syndicate’s board will take to respond to the security services’ deliberate escalation against the journalistic community. This incident was not a measure against two journalists alone, rather it was intended to be a threat to all journalists through the raid of the syndicate headquarters.”

He said, “This issue must be dealt with at the political level, not through security [measures]."

Qalash added, “We will start meetings with various editors-in-chief to discuss the possibility of withholding the issuance of newspapers or other means to express objection to what happened. … We will not negotiate directly with the Ministry of Interior or its representative, since they won’t even acknowledge what happened.”

The morning after the raid, Egypt’s major daily newspapers carried headlines condemning the raid. Al-Shorouk described what happened as “Black Sunday,” while daily Al-Masry Al-Youm had a front-page article titled “Press under siege.” Even state-owned Al-Ahram published an editorial condemning the raid. Under the headline “Raid among journalists,” it said, “[The Interior Ministry] will not succeed in its malicious goal of gagging mouths and stifling the freedoms of opinion and expression, which are outlined in the constitution that has yet to be read by security leaders, who try to portray to the political leadership that they are protecting the state and its security. They don’t realize, however, that if the people rise to take their freedom, no one can stop them — not even the mightiest security barricades and weapons.”

Amid the absence of an official response from the government concerning the raid, the press office of the Ministry of Interior accidentally sent out on May 2 an internal memo to public newsletter subscribers on how the ministry plans to deal with this crisis. Most notably, the memo proposed accusing journalists of wanting to manufacture their own state and not implement provisions of the law in an attempt to vilify journalists among the public.

As angry reactions escalated, the attorney general issued on the evening of May 3 a decision banning the publication of any news reports about the facts of the syndicate raid or the detention of the two journalists until the conclusion of the investigation. The statement announcing the decision stressed that the procedures taken to arrest the journalists were under the order of the attorney general, and that arrest orders can be carried out at the Press Syndicate headquarters. The statement accused the head of the syndicate of committing a crime punishable by law by agreeing to let the two journalists participate in a sit-in within the headquarters, even though orders had been issued for their arrest.

The Press Syndicate’s Freedoms Committee issued its annual report in February in which it documented many cases of violations of press freedom by the Egyptian authorities. The report noted 782 documented violations against journalists in 2015, including imprisonment, pre-trial detention, arrests, raids of homes, fabricated charges, draconian rulings, prohibition from practicing the profession, destroying equipment and cameras, writing bans, legal prosecution, raids of newspaper or news website headquarters, disabling publication of print newspapers and confiscation of already printed copies. The report also noted that 14 gag orders had been issued in 2015 — 12 by the public prosecutor and two by courts — violating the public’s right to knowledge and free circulation of information.

Sherif Mansour, the coordinator of the Middle East and North Africa program at the Committee to Protect Journalists, told Al-Monitor that the raid against the syndicate was an unprecedented escalation against the press in Egypt. “Since 2013, journalists in Egypt have been subject to escalating attacks that contributed to the country being classified as one of the most dangerous states for journalists. A large number of independent and opposition media organizations have been eliminated,” he said.

Mansour stressed the importance that “press laws are activated and the political administration changes its escalating rhetoric against journalists.” He said the state should provide “safeguards and legislation that ensure journalists can carry out their work, in accordance with the constitution.”

As the crisis escalates, other professional syndicates, political parties and opposition currents have joined the journalists’ sit-in protesting the security forces’ practices. The Egyptian administration is now in a bind — it must find a way to contain the anger of the press, following condemnations from foreign organizations such as the United Nations and the European Union, while at the same time face other economic and political crises.