Will new union chief give Egypt more control over press?

Abdel Mohsen Salama, who is affiliated with the regime of Egyptian President Abdel Fattah al-Sisi, was recently elected head of the Journalists' Union, raising questions about the state's future role in the media. 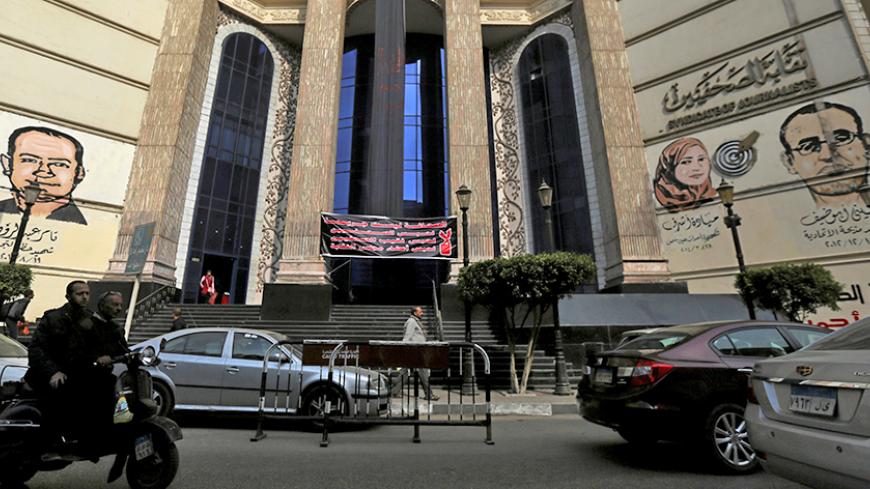 People and vehicles move past a black sign in front of the Egyptian Press Syndicate's headquarters that reads "The press: It is not a crime," Cairo, Egypt, Nov. 20, 2016. - REUTERS/Mohamed Abd El Ghany

CAIRO — Egypt's media is often in the news itself as it has faced one government crackdown after another over the years. The idea of a free press in Egypt is often seen as a paradox. The recently elected president of the Egyptian Journalists' Union, who is affiliated with the regime, now faces the thorny task of uniting the syndicate's divided electorate.

On March 17, Abdel Mohsen Salama, managing editor of state-run Al-Ahram news group, was elected head of the union, defeating incumbent Yahya Qalash, who strongly defends an independent union and free press. The election results sparked controversy about how much control the regime might have over the union.

The union board includes 12 members and the president. Every two years, elections are held and six members, along with the president, are elected. The remaining members will be elected in 2019.

State-run Al-Ahram has the most votes, with about 1,700, out of the 5,596 votes of all state-run papers; this was a decisive factor leading to Salama’s victory. There are five other major state-run news organizations: the Middle East News Agency, Rose al-Yusuf, al-Akhbar, al-Gomhouria and Dar al-Hilal. Private papers are estimated to have 2,710 votes, and partisan papers 473.

Salah Issa, secretary-general of the Supreme Press Council, told Al-Monitor the two main issues in the elections were political and economic: the state’s desire to control the union, and journalists' low wages during the news industry's economic crisis.

Issa said the "silent majority,” mostly in the state-run papers, only deals with the union to benefit from its services. Those are the ones who settled the electoral battle. Salama got 2,457 votes; Qalash had 1,890.

On March 15, two days before the elections, Salama met with the housing minister, who said he would work to make public housing available to journalists. On March 16, the eve of the elections, Salama said in a news conference that he had obtained a government promise to increase the training and technology allowance paid by the Ministry of Finance to journalists — though the ministry denied making such a promise.

The journalists pinned high hopes on Salama. They believed in his impossible promises in a country with an ailing economy, according to Issa.

Khaled el-Balshy, former head of the union's Freedom Committee, told Al-Monitor that state-run papers such as Al-Ahram and Al-Akhbar provided buses for their Salama supporters to vote, and Al-Gomhouria reportedly even distributed meals. It was a fierce campaign to defeat Qalash.

Qalash used the slogan “We Started and We Shall Continue,” while Salama chose “Let’s Rescue the Profession from its Ordeal,” referring to the storming of the union in May 2016.

Under Qalash's term as union president, a dispute emerged between the union and the state after police forces stormed union headquarters May 1 to arrest journalists Amr Badr and Mahmoud al-Saqa for allegedly inciting protests.

Three days after the raid, thousands of journalists gathered and called for the interior minister to be removed, as he was primarily responsible for the police action. The journalists also called on the president to apologize.

But the crisis only worsened and Qalash, Balshy and board member Gamal Abdel-Rehim were arrested and given two-year prison sentences on charges that they had hidden Badr and al-Saqa at union headquarters. They were granted bail, and on March 25 an appeals court revised their sentences to one year of suspended jail time.

The verdict had been expected Feb. 25 but was postponed. Balshy said it was no coincidence that it was delayed until after the election.

Issa said that the storming of the headquarters was handled “very professionally,” but that the police violated the law in this case because a member of the union board and the prosecutor should have been present during the search.

He said a group of journalists had started what they called the “Correctional Path Front,” which played a major role in incitement against the union and fueling the dispute, leading to a pro-regime winner. However, Makram Mohammed Ahmed, a former union head and an active member of the Correctional Path Front, told the Egyptian daily Al-Masry Al-Youm on March 18 that Salama is a consensus man who can fix the strained relations with the government.

Following his victory, Salama vowed March 19 in televised remarks to intervene with the state to resolve any crisis involving journalists, including the case of Qalash, Balshy and Abdel-Rehim, whose sentences can be appealed again.

Balshy isn't optimistic. “Whether we like it or not, the state wants to undermine freedom of opinion by confronting those who call for freedom,” he told Al-Monitor.

He said freedom is the backbone of the press. With the decline in freedom of opinion, the quality of newspapers and citizens' confidence in them is declining. The press was very open and active after the January 25 Revolution in 2011, he said, but the situation now is bad because of the state’s intervention.

Issa said the regime’s security doctrine seeks to subjugate institutions, including professional associations and civil society organizations, to the executive branch. He indicated that this contradicts the legitimacy of the revolutions of 2011 and June 2013.

Columnist Abdullah al-Sanawi said no authority can control the Journalists’ Union and the nationalization of the union remains impossible despite all the union’s pro-regime groups.

Sanawi told Al-Monitor that the elections were a struggle between secrecy, which is reflected in media blackouts, and the kind of disclosure that is required for a free press — the kind that was adopted by Qalash. But the struggle was not decisively settled. He said the groups favoring an independent press, despite the defeat, will again put forth their agenda to the press community.

Issa said Salama “will find himself under pressure from the union members to commit to freedom issues and prove to the government that it has no influence.”

Sanawi said, “The state is always present in the newspapers’ editing rooms, especially in state-affiliated institutions and TV channels, amid the pro-regime businessmen’s control of satellite channels, and that is how political life goes.”