The Egyptian parliament has reversed its decision to specifically include media outlets in its anti-terrorism law, but rights advocates say the action is mainly window dressing and won't help protect journalists. 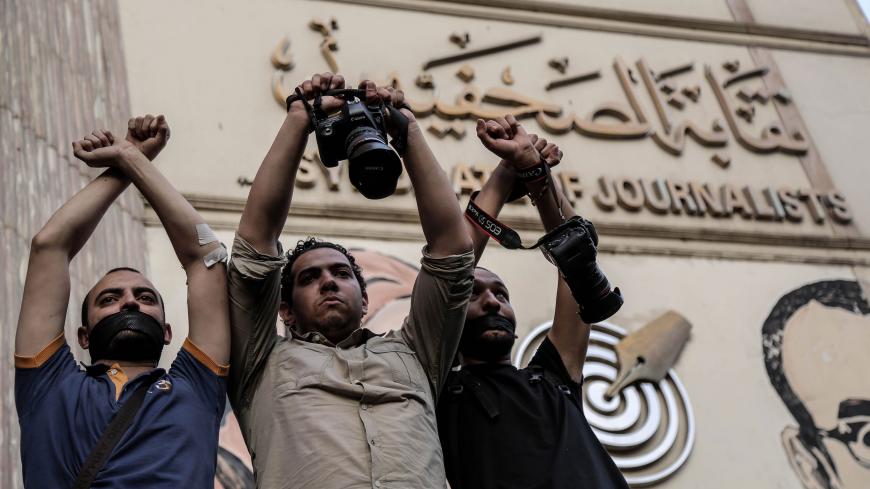 Egyptian journalists, gathered in front of the Journalists Union, stage a demonstration to protest the detention of journalists by the Egyptian security forces, Cairo, Egypt, May 3, 2016. - Stringer/Anadolu Agency/Getty Images

CAIRO — In a move described by lawyers and free speech advocates as a "charade," the Egyptian parliament has removed media platforms from the government’s definition of terrorist parties.

In a U-turn, parliament this month decided to exclude language it had just weeks ago written into a proposed amendment to the controversial 2015 anti-terrorism law.

The language initially expanded the definition of terrorism acts to include satellite TV channels, radio stations and social media accounts, which raised concerns about it being another means of suppressing the constitutional rights of Egyptian citizens. It also raised concerns that the language might further darken Egypt's already-dreary human rights reputation.

State-owned daily newspaper Al-Ahram cited Abu Shoka as telling his fellow parliament members Feb. 12, “As the inclusion of such media outlets … could stir up a lot of problems for Egypt in the international media and human rights circles, I approve that these … be removed from the new amendments to the law.”

“The fact that the lawmakers removed that article is nothing but a mere charade. If the authorities decide to deem a journalist a terrorist, they can still do so under that infamous [anti-terrorism] law, claiming that the company [she or he] works for has carried out terrorist activities or incited the viewers to undertake them,” Eid told Al-Monitor.

In fact, the final text of the amendment states that “associations, organizations, groups and institutions can be designated as terrorist as long as they are involved in any way in harming citizens, spreading terrorism and endangering their lives, freedoms, rights and security.” It can be applied to these entities whether they are operating in Egypt or abroad.

During the parliament discussions, Abdel-Aal and Abed further said that inclusion of the word “companies” in the new version indicated that this could also entail media outlets inciting violence and promoting terrorism.

“The law entails loopholes that could still be used to incriminate journalists and other media professionals,” Eid argued.

“It's kind of an underhanded tactic. Putting in those articles [about media platforms] and then removing them afterward is a kind of legal fiction. The legislators tackled them differently as being affiliated to companies,” Bahnasy argued.

Meanwhile, the majority of parliament members, known for being loyal to Egyptian President Abdel Fattah al-Sisi, eventually approved the final form of the amendment Feb. 10, referring it to the State Council for revision.

When the anti-terrorism law was first enacted in 2015, the journalists’ union and several local and international human rights organizations voiced concerns about a possible crackdown on the media in Egypt in the name of counterterrorism.

Egyptian media outlets have been facing difficult challenges over the past five years, mostly being unable to explicitly criticize the government or the regime.

“Whether there is a law or not, journalists are targeted all the time, despite the fact that the [Egyptian] Constitution includes articles that guarantee the freedom of media and speech that are never applied,” Khaled el-Balshy, former head of the Freedoms Committee of the Egyptian Journalists Union, told Al-Monitor.

The media in Egypt has deteriorated in the face of these restrictions. "What we have now is nothing but public relations,” said the outspoken journalist, adding that he is currently jobless due to the lack of press freedom in the country.

About 20 journalists are behind bars in Egypt. According to the World Press Freedom Index of 2019, released by Reporters Without Borders, Egypt ranked No. 163 out of 180 countries in press freedom, down two spots from 2018.

Apart from the anti-terror law, Egypt has taken other measures against what are perceived as acts of terrorism. In October, parliament formed a new Counterterrorism Committee tasked with revising laws, giving concerned authorities more power to fight terror and speeding up the trials of terrorism suspects.

In recent years, the state has adopted a legal framework hindering media freedom in the country. About 500 news portals and websites of local and international organizations, such as Human Rights Watch and Reporters Without Borders, were blocked in Egypt ahead of the 2018 presidential elections.

Egypt had earlier tightened control on broadcasts and foreign channels known for criticizing the government and the regime after the military coup that overthrew late Islamist President Mohammed Morsi in 2013 following mass protests critical of his regime.