In the wake of the Palm Sunday church bombings, Egyptian President Abdel Fattah al-Sisi and parliament took several steps amending internal laws that confront terrorism, but many doubt the ability of these measures to halt terrorist attacks. 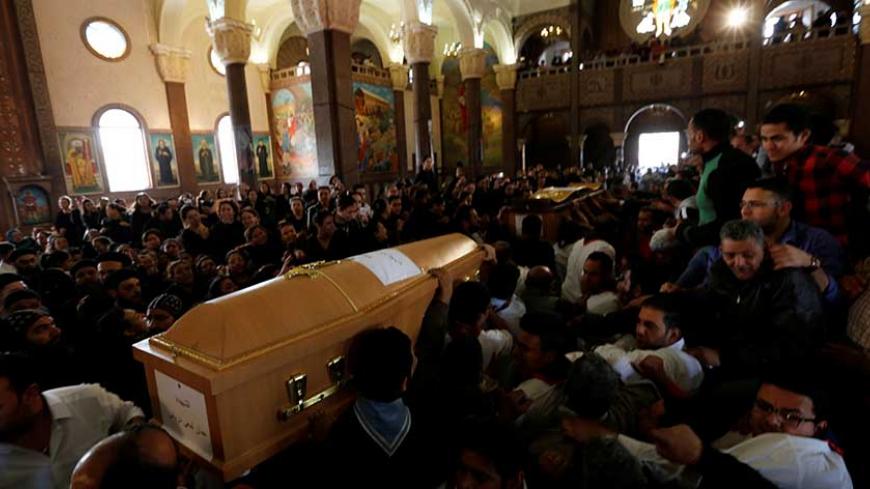 Relatives mourn the victims of the Palm Sunday bombings during a funeral at the Monastery of Saint Mina "Deir Mar Mina" in Alexandria, Egypt, April 10, 2017. - REUTERS/Amr Abdallah Dalsh

CAIRO — Terrorism struck Egypt once again on April 9, on Palm Sunday, when two bombings targeted St. George’s Church in Tanta and Saint Mark’s Church in Alexandria, killing 48 people and injuring dozens. In the aftermath, Egyptian President Abdel Fattah al-Sisi took a series of urgent measures. He declared a three-month state of emergency as well as the formation of a supreme council to fight terrorism and extremism in Egypt. In addition, the parliament is in the process of amending four laws related to prosecuting terrorists, amendments that were approved during an April 10 parliament session. The Egypt Support Coalition — Egypt’s majority parliamentary bloc — is putting new legislation in place to protect public facilities and worship places.

Al-Monitor attended the April 10 general parliamentary session held to amend four laws related to prosecuting terrorists. The members of parliament underlined during the session the need for a comprehensive strategy that includes new ways to combat terrorism in Egypt.

The parliament’s committee of legislative and constitutional affairs called on members of parliament earlier in the morning of April 10 to finish drafting a parliamentary bill proposed by the Egypt Support Coalition titled Bill to Amend the Code of Criminal Procedure. The bill aims to introduce amendments to four Egyptian laws related to prosecuting terrorists: the law of criminal procedures, the 1959 Law No. 57 in the part related to appeal cases and measures before the Court of Cassation, the 2015 Law No. 8 regarding the organization of terrorist lists and the 2015 Anti-Terrorism Law No. 94.

He added, “One of most important articles of the bill would allow Egypt’s public prosecutor to examine the calls for adding certain groups to the terrorist lists, after the submission of evidentiary documents.”

The formation of a supreme council to fight terrorism was among the decisions that Sisi took in the wake of his meeting with the members of the National Defense Council. Sisi noted that the council would be given sufficient authority in the fields of media, judiciary, law and religious rhetoric to fight radical thought. But the formation of the council requires a law. Meanwhile, the Egyptian parliament is expected to pass a law stating the tasks of the council as per Article 101 of the constitution, which gives the Egyptian parliament its legislative power.

During the April 10 parliamentary session, the members of parliament gave their propositions to put a strategy for new ways to combat terrorism in Egypt, like holding fast-track trials for terrorists, developing Egypt’s security policies, clearing the educational curricula of any radicalism and re-creating religious rhetoric.

During the parliamentary session, member of parliament Mona Mounir had accused Al-Azhar curricula of being responsible for the rising extremism. Parliament Speaker Ali Abdel Aal responded to Mounir’s statements and called for clearing the education curricula in Egypt to make them moderate and more tolerant to others.

Abdel Aal said that social media networks like Facebook, Twitter and YouTube, which some people use to send information to terrorists, are monitored as per the state of emergency law, and he asserted that the media organizations’ law will organize this monitoring activity.

Member of parliament Tarek el-Khouly asserted during the session that terrorist groups always play the religious strife card in Egypt. This is why they target churches, in order to break the national unity between the Muslims and Copts of Egypt.

Kholy suggested bridging the security gaps related to securing Egyptian churches. He said, “The police must guard the doors of the church, while the church-affiliated scouts secure the inside.”

Kholy underlined the importance of coordination between churches and the Egyptian Ministry of Interior, and parliamentarian Magdi Malak called for redrawing Egypt’s security policies, which must be developed to confront terrorism.

Member of parliament Shadia Thabet sent an urgent statement to the parliament’s secretariat before the April 10 session kicked off, stating that it is not enough to take internal measures like legislations. The Egyptian parliament should address the Security Council with an official letter to condemn states that fund terrorism, impose sanctions on them, and launch a large-scale inquiry to expose them and their schemes to destroy security and peace in the world. Thabet told Al-Monitor, “Terrorism perpetrators in Egypt and the Arab world are funded by states sponsoring terrorism.”

In the framework of a new parliamentary strategy to fight terrorism in Egypt, the Egypt Support Coalition submitted another bill to protect public and private facilities a few hours after the terrorist attack on April 9.

As per a statement issued by Mohammad al-Suwaidi, the head of the Egypt Support Coalition, the bill aims at enhancing the security of public and private facilities and protecting them from danger by installing surveillance cameras to monitor the area outside the premises. A legal commitment would be established and would be binding for the public and private facilities that welcome visitors, especially administrative, commercial and religious facilities. The bill would include sanctions to guarantee the implementation of the provisions of the law.

Human rights activists in Egypt had conflicting opinions regarding the urgent Egyptian measures that the president and parliament took to confront terrorism. Some activists fear that the state of emergency would breed oppression of freedoms once again.

Abu Saada noted that the state of emergency was a failed experience in Egypt for more than 30 years before the January 25 Revolution, and it did not deter terrorism in the days of former President Hosni Mubarak.

He added that the new ways to face terrorism in Egypt include empowering security institutions by giving them tracking capacities and allowing them to adopt crime prevention policies. He commented on the parliament’s amendment of the four laws related to prosecuting terrorists, saying, “Terrorists who execute their operations, knowing that they will die in the process, will certainly not care about special and fast-track or even military trials.”

Said Abdul Hafiz, the director of the Forum of Independent Egyptian Human Rights, told Al-Monitor, “Bringing back the old human rights situation in Egypt by declaring a state of emergency is no longer an option. Article 54 of the current Egyptian Constitution limits the state of emergency to three months that can be renewed only once, rather than leaving it open-ended like before.”

In a general parliamentary session that Al-Monitor attended on April 11, Egyptian Prime Minister Sherif Ismail said, “Egypt is trying to curb terrorism through its state of emergency declaration, knowing that some parties are paying large sums of money to support terrorism.” He added, “We must take exclusive measures to offer the needed cover to counter terrorism. The state of emergency law gives the state institutions the flexibility to fight terrorism, which the government is trying to eradicate.”

In the aftermath of the church bombings, the president and parliament took a series of measures to confront terrorism in Egypt. Still, many doubt the ability of these measures to halt terrorist operations, which are mainly targeting churches.