100 days on, Egypt’s parliament has seen few achievements, much controversy

In the first 100 days of parliament, intense battles have raged between its members, resulting in the resignation of one parliamentarian, the suspension of another and several threats of resignation. 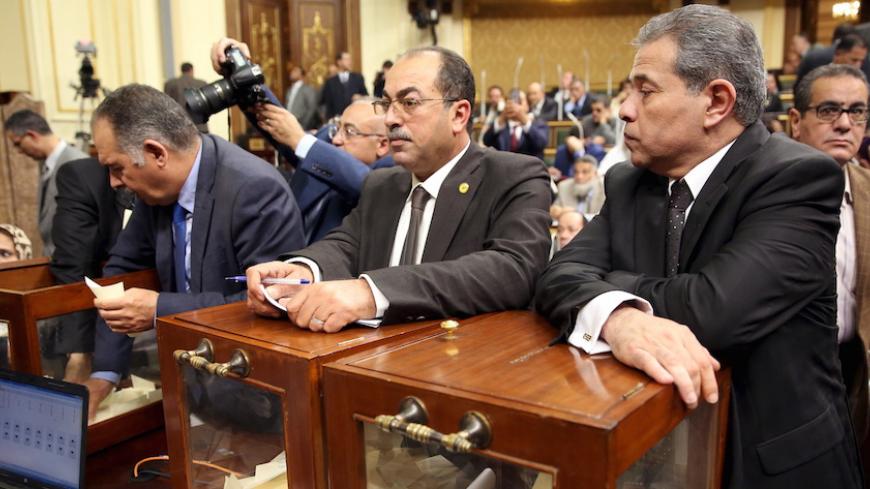 Tawfiq Okasha (R) looks at the votes that will choose the speaker of the Egyptian parliament at the main headquarters of parliament in Cairo, Jan. 10, 2016. - REUTERS

April 19 marked the 100th day of the first session held by Egypt’s new parliament on Jan. 10. During this period, the legislature’s sessions were marked by battles, challenges and various crises involving members of parliament. The first crisis came on day 1, when inappropriate behavior by some of the parliamentarians was broadcast on live TV. This caused a wave of criticism and mockery on social networking sites, prompting the speaker of parliament, Ali Abdel Aal, who was elected by a majority of parliamentarians, with 380 votes, to issue a decision to stop live coverage of parliamentary sessions.

The most prominent challenge facing the parliament in its first session was the impasse posed by Article 156 of the Egyptian Constitution. The article notes that when “an event that requires taking urgent measures, which cannot be delayed,” occurs while the parliament is not in session, the president will call for an urgent session to discuss the matter. However, according to the same article, if a parliament has not been elected, the president has the authority to issue decrees that enter into force of law, but these decrees must be debated and approved by parliament within 15 days once a legislature is elected.

From the time he assumed office in June 2014 until the first parliamentary session, President Abdel Fattah al-Sisi had issued 342 decrees. This meant legislatures were faced with the seemingly impossible task of debating and ratifying more than 20 decrees per day to meet the 15-day constitutional deadline. To do this, the parliament formed committees to discuss all of these laws according to competences, but without holding elections for committee heads. The parliament approved all of the proposed laws except for the Civil Service Law, which triggered a controversy among the Egyptian public — 332 members of parliament rejected this law compared to 150 who voted in favor of it, while seven members abstained. The Support Egypt coalition, which represents the parliamentary majority and is accused of being the voice of the state in the parliament, had announced its support for this law, yet its members of parliament renounced their approval just before the vote.

Although 100 days are a very short period for this parliament with a five-year mandate, intense battles have already been raging between its members, reaching the point of the resignation of one parliamentarian, the suspension of another and several threats of resignation.

The most controversial and widespread crisis was the meeting of former parliamentarian Tawfiq Okasha with the Israeli ambassador, for which Okasha faced a storm of criticism and attacks by members of parliament. Parliamentarian Kamal Ahmed even hit Okasha with a shoe. The parliament ended up referring Okasha to a special committee to examine the multiple requests for his dismissal made by various members of parliament. The parliament also referred Ahmed to an investigation committee, which banned him from attending sessions for a year. The committee examining Okasha’s affair recommended his suspension for a year, but a number of parliamentarians in the plenary meeting who voted on this matter did not agree with the commission's recommendation, and the parliament voted on dismissing him. Moreover, during this period, Maj. Gen. Sameh Seif El Yazal, the leader of the majority coalition Support Egypt, passed away.

The parliament started drafting its organizational regulations, which were debated by the members of parliament over several sessions and approved by the president during the past few days. The parliament also had to deal with another challenge during the 100-day period, which was Prime Minister Sherif Ismail’s announcement of the government’s program.

The parliament had announced the formation of a number of committees to discuss the government’s program and to declare the parliament’s position and to issue relevant recommendations.

Ultimately, the parliament approved the government program on April 19 with 433 votes in the plenary session attended by Ismail and all the ministers. The program was rejected by 38 members of parliament, while five abstained from voting.

Another crisis faced by the parliament was the handover of the islands of Tiran and Sanafir to Saudi Arabia as a result of the maritime border demarcation agreement between Egypt and Saudi Arabia. The agreement faced a large wave of objection, and a protest was staged in front of the Journalists’ Syndicate on April 15, despite PSisi’s confirmation that “the parliament has the right to refuse or approve” the agreement.

Speaking to El Watan News on April 19 — the 100-day milestone — legal expert Amro Abdel Razek said, “The Egyptian parliament has yet to meet the basic aspirations of citizens.”

He added, “The coming period will witness the submittal of several important laws and legislation that the people await, including the application of the VAT [value added tax] law and other laws.”

For his part, parliamentary affairs analyst Akram Alfi told Al-Monitor, “During its first 100 days, the parliament has passed through a transitional stage and was preoccupied with regulatory matters, the approval of laws, the drafting of its own internal organizational regulations and the discussion of the government's program.”

He added, “The parliament has achieved one victory, the rejection of the Civil Service Law, and this is a matter that pertains to the average citizen.” Regarding the performance of parliamentarians, he said that the controversial positions taken by members of parliament such as Okasha and Mortada Mansour were expected, given that they are “known to be controversial.” He noted that the performance of the majority Support Egypt Coalition was marred by confusion, especially after the death of Yazal.

Regarding the laws to be approved by the parliament in the coming period, Alfi said, “The parliament will pass through another transitional stage, which is the period of enactment of the laws provided for by the constitution, which obliged the parliament to approve them during the first legislative term, and which are laws governing the media, the building of churches, education and health.”