Proposed legislation on topics such as charging fees to access Facebook and restricting baby names has led many Egyptians to complain that the country’s legislators aren’t tackling the nation's pressing problems. 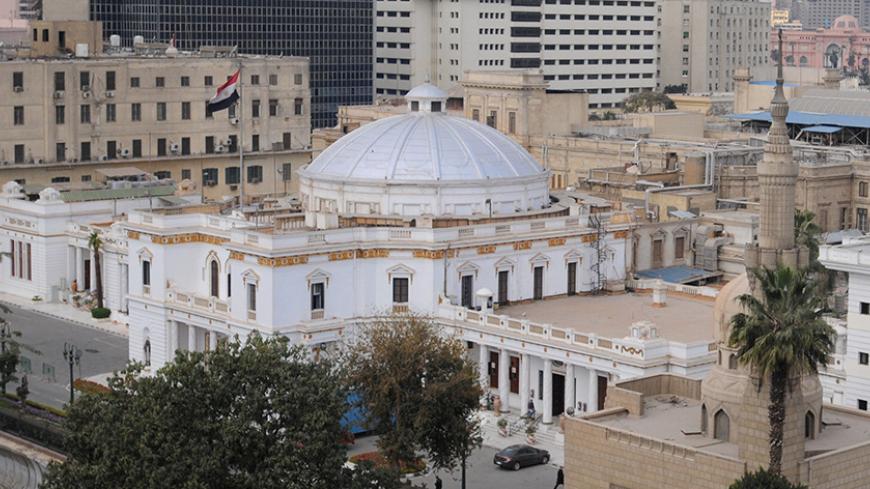 When the Egyptian parliament convened its inaugural session on Jan. 10, 2016, Egyptians had hoped the new legislature would fare better than its predecessor, the Islamist-dominated assembly, which was dissolved by court order in June 2012 after the Supreme Constitutional Court deemed the election process “unconstitutional.” Just weeks before the new parliament’s inauguration, Sameh Seif Al Yazal, a former intelligence officer who is now deceased, announced the formation of the In Support of Egypt Coalition — a parliamentary majority bloc that made no secret of its support for President Abdel Fattah al-Sisi’s policies. Skeptics warned that with no real opposition in parliament, it would be no more than a rubber stamp legislature, heavily tilted toward the regime.

Despite the warnings, few Egyptians were prepared for what was to come.

From the onset, disappointment set in when the lawmakers were shown on state TV waving to the cameras and bickering among themselves. Controversial lawmaker Murtada Mansour drew fiery rebukes from fellow parliamentarians when he refused to take the constitutional oath, saying he did not agree with the wording. The session was plunged into chaos minutes after it had started, and the lawmakers voted against live coverage of future proceedings.

In the short span of the last 16 months, at least two lawmakers have been dismissed after their referral to disciplinary committee hearings — a move that critics said was aimed at rooting out any real opposition that may have existed. Member of parliament Mohamed Anwar El Sadat, who had his membership revoked in February for allegedly leaking “classified” information to foreign entities, is a prominent dissenter. Parliamentarian Tawfiq Okasha, who was dismissed a year earlier, had ruffled feathers on several occasions by criticizing state institutions, and in particular security agencies, on his TV talk show on Al-Faraeen channel.

In early May, four South Sinai deputies resigned en masse on grounds they have not been able to deliver on their campaign promises and provide services for the citizens who voted them in. While they have been persuaded by the parliament speaker to stay on, they have vowed to walk out again “if things do not change.”

Rather than play its prescribed watchdog role, Egypt’s House of Representatives has hastily endorsed a number of contentious laws issued by presidential decree during the more than three years in which Egypt was governed without a parliament.

“Many of the laws passed since January 2016 share the common attribute of assisting the authorities in rolling back the freedoms won in the January 25 uprising,” lamented prominent human rights lawyer Bahey El Din Hassan, the director of the Cairo Institute for Human Rights Studies, who has had his assets and those of his organization frozen under a “restrictive” nongovernmental organization law issued in November.

“The law, which subjects the work and funding of civil society organizations to control by security agencies, is the most draconian in the country’s history,” he told Al-Monitor. “It assists in closing what little space was available for political and civic activism under the [Hosni] Mubarak regime.”

Another contentious law, the judicial authority law, passed in April, grants the president the power to appoint the country’s heads of judicial bodies. The legislation has met with stiff resistance from the State Council and other judicial bodies that say it violates the constitution and undermines the independence of the judiciary.

The disputed laws have sparked an outcry from activists on social media. Meanwhile, a series of equally questionable draft laws proposed by some members of parliament in recent months has aroused dismay among broad swaths of the Egyptian public.

In September, member of parliament Elhamy Agina stirred an uproar after suggesting that Egyptian women should undergo female genital mutilation "to curb their sexual appetites as many Egyptian men are sexually weak." Agina also called for female students to undergo “virginity tests” before their admission into universities. His comments prompted outrage among human rights campaigners who called for his prosecution. Agina was referred to a disciplinary committee hearing that recommended his dismissal. Yet he has not been ousted.

In April, another member of parliament suggested controlling social media platforms such as Facebook and Twitter by requiring users to register with a government authority and pay monthly “registration” fees. A third lawmaker has, meanwhile, recommended a one-year ceiling for engagement periods before the wedding, imposing fines on people who cancel the engagement without a legitimate excuse or couples that remain engaged for longer than the one year permissible by the law.

And just when Egyptians thought the legislators’ recommendations could not get more absurd, a member of parliament this week suggested a bill imposing harsher penalties on parents who give their children “Western names.” Bedr Abdel Aziz, the parliamentarian who authored the bill, told Al-Monitor that imposing hefty fines on violators was “a means of preserving our Arab, Islamic identity.”

Some of the recently proposed bills are so outrageous that Zainab Mohamed, a physician, told Al-Monitor, “Reading about the draft laws, I thought it was fake news from a satirical news publication like The Onion.” She said that the proposed draft laws serve as a distraction from more serious issues such as the ongoing economic crisis and recent terrorist attacks.

While acknowledging that some of the proposed bills are “irrational,” member of parliament and film director Khaled Youssef denied this was part of a plan to distract the public from everyday problems. “The proposed bills merely reflect the parliamentarians’ own socio-cultural background and education that have shaped those legislators’ views and determined their priorities,” he explained.

Responding to criticism that the legislature has focused on trivial matters instead of tackling society’s more pressing problems, member of parliament Kamal Amer, who chairs the Defense and Security Committee, argued that some “critical issues are currently under review by the assembly — like the much-needed anti-corruption draft law and another bill to protect places of worship.” Moreover, a proposed bill to counter the surge in population is currently under study, Amer noted, adding, “We are looking into what incentives we can offer to promote family planning.”

While the proposed reforms cited by Amer seem relevant, Amer himself has not escaped controversy. A draft law he proposed earlier this month has been the subject of much critical debate. It would impose prison sentences of up to three years and fines of up to 100,000 Egyptian pounds ($5,500) for insulting the president and state institutions. Human rights campaigners fear the law would be used as yet another tool to stifle dissent.

With parliament now well into its second year, many disaffected Egyptians say the “new” legislature is far from meeting their expectations. “What parliament?” retorted human rights lawyer Hassan. “The members of parliament were all handpicked by the intelligence services,” he told Al-Monitor, citing a testimonial published on social media networks by liberal politician Hazem Abdel Azeem on Jan. 1, 2016, that unveiled the alleged interference by the intelligence services in the parliamentary vote to guarantee two-thirds of parliamentary seats.

“The president held the legislative powers for three years when there was no parliament; he still holds that power today,” said Hassan.