The Egyptian parliament's approval to lift the prohibition of the sale of alcohol in the law on shops has stirred a wide controversy in a country where Sharia is the source of legislation. 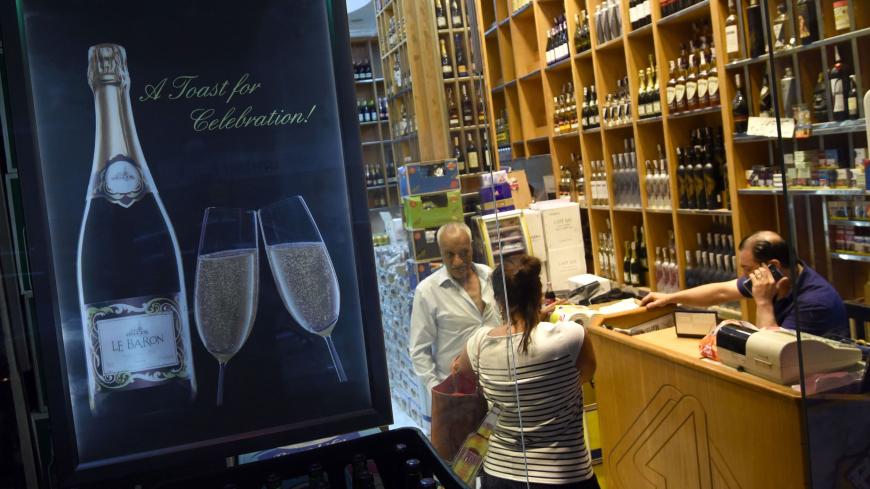 CAIRO — Egypt's State Council, the judicial body charged with examining the constitutionality of bills that are preliminarily approved by parliament, will finalize the review of a new bill on public shops by March 2 at the latest, and will send its report to parliament by the following day, according to a council source speaking to Al-Monitor. After  the report is issued a final vote on the law will be held in parliament. The new bill does not prohibit alcohol supply and consumption.

The Egyptian parliament had initially approved the new bill during its plenary session Jan. 13. The majority of parliamentarians, however, voted in favor of removing Article 28, which prohibits the supply and consumption of alcohol in public shops; it also bans gambling and engaging in any acts that are immoral or violate public ethics.

Upon this initial approval by a majority vote of members of parliament, parliament Speaker Ali Abdel Aal referred during the same session the bill to the State Council in order to obtain its legal and constitutional opinion. The council examines bills before their ratification by parliament, but its opinion remains advisory and not binding.

The removal of Article 28 sparked a storm of criticism on social media against the parliament. For many Egyptian social media activists, striking this article goes against the piousness of Egyptians. In accordance with the 2014 Egyptian Constitution, Islamic law is the main source of legislation. Some activists even described lifting this prohibition as encouragement by the parliament to consume alcohol. Gambling and immoral acts are already banned under other laws, most notably Egyptian Penal Code Article 325 and Article 278.

Abdel Aal rebuked the criticisms leveled against the bill of encouraging alcohol consumption at the opening of the parliamentary plenary session on Jan. 14. He justified the removal of the ban on alcohol by noting that the sale of alcohol in shops and consumption are regulated by other laws.

“Egypt is a civil state that believes in the concept of citizenship and recognizes the principle of freedom of religion. This is expressly provided for in the constitution,” he said.

Many Egyptian social activists interpreted his position as a suggestion that citizens should not be angry about allowing the sale of alcohol in shops, as long as it is within the boundaries of the law.

Ali Riyad is a lawyer specializing in permits for construction, shops and various activities. He told Al-Monitor that the Ministry of Tourism prevents the sale of liquor in public shops under law No. 63 of 1976.

Article 2 of this law states, “It is prohibited to supply or consume spirits or alcohol in public places or shops.” It adds that this provision does not apply to hotels and tourist facilities determined in accordance with law No. 1 of 1973.

Riyad pointed out that Article 5 of the same law sanctions the contravening owner of the public shop with “imprisonment for a period not exceeding six months and a fine not exceeding 200 Egyptian pounds [$11.40], or one of these two penalties.” The article adds, “In all cases, the shop shall be closed for not less than one week and not more than six months.”

A member of parliament for the Nour Party, the political arm of the Salafist Dawa Party, told Al-Monitor on condition of anonymity that parliamentarians’ allegations that alcohol is prohibited in public shops according to the Ministry of Tourism laws are not true. “Obtaining a license from the Ministry of Tourism to allow the trade of alcohol is no longer limited to hotels only,” he said.

He added, “We are an Islamic state. The constitution recognizes that Islamic law is the main source of legislation. All these laws must be amended, including the laws of the Ministry of Tourism and the law on public shops.”

Mohamed Salah, another parliamentarian for the Nour Party, said in a speech at the parliamentary briefing session Feb. 5 that the law on public shops is not in line with the constitution.

Mohsen Mansour, an attorney before the Constitutional Court, told Al-Monitor, “Not only Al-Azhar does not prohibit the sale of alcohol to non-Muslims, but the Egyptian Constitution was drafted for all Egyptians — not only Muslims — even if the Islamic law is the main source of legislation. The constitution recognizes the civil character of the country, which means that all citizens are equal in rights and duties regardless of their religion.”

He noted, “A law cannot prohibit Muslim owners of shops from selling alcohol while allowing non-Muslims to do so, or allowing public shops to sell alcohol to non-Muslims only.”

Mansour ruled out the unconstitutionality of tourism and public shops laws allowing the sale of alcohol. “Laws are man-made and may not be able to fully apply all of the Sharia principles. Each individual should apply Sharia for himself,” he said.