Egypt's Al-Azhar in dispute with government over fatwa authority

Tensions are escalating between Al-Azhar and legislative and executive authorities over proposed legislation that would render Dar al-Ifta an "independent" institution, ending Al-Azhar's long-standing patronage of the Islamic legal body — and replacing it with state dominance and possibly tighter government control over the religious narrative. 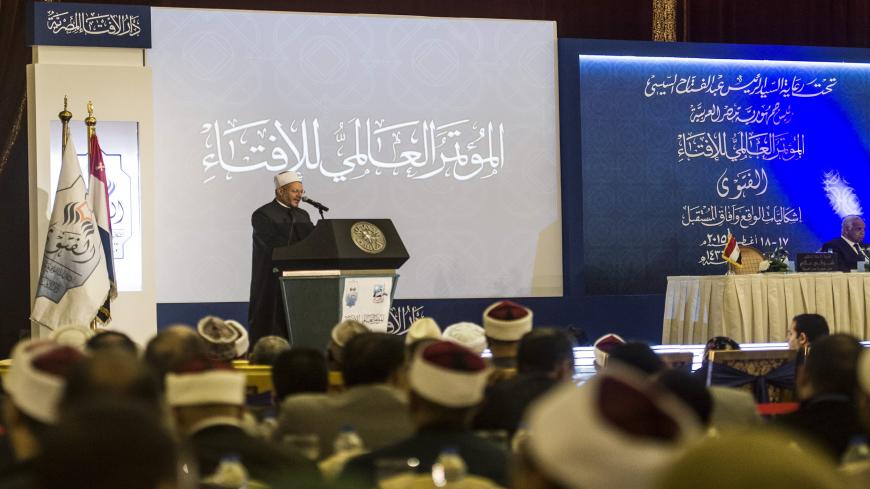 The bill, which has been referred to the State Council for review before its final endorsement by the parliament, seeks to reorganize the way Dar al-Ifta operates including the mechanism by which its head —the grand mufti — is selected, his mandate and the length of his tenure. If the bill is enacted into law, Al-Azhar's Council of Senior Scholars (CSS) would no longer elect the mufti by secret ballot, the method of voting introduced by late Muslim Brotherhood President Mohammed Morsi in 2012.

Instead, the bill stipulates that the CSS, which is made up of 40 of Al-Azhar's top scholars, would nominate three ulema — either from among its own members or from outside the council — for the position, and it would be up to the president to choose which of the three gets appointed as mufti. The president would also be granted the authority to extend the mufti's tenure or replace him if and when the latter reaches the legal age of retirement of 60.

“The proposed law would place the Islamic legal body under the auspices of the Cabinet instead of under the patronage of the Ministry of Justice as has been the case since Dar al-Ifta's establishment in 1895; it also designates Dar al-Ifta as an autonomous religious institution that enjoys financial, technical and administrative independence,” liberal lawmaker Mohamed Abu Hamed, who has spearheaded a campaign to ban the niqab in Egypt, told Al-Monitor.

This basically means that Dar al-Ifta would no longer serve as the advisory and judicial arm of Al-Azhar but would function as “a separate entity,” according to Abu Hamed. Furthermore, the draft law sets a legal and regulatory framework for the selection and appointment of the fatwa clerics defining a methodology for their work and stipulating the creation of a committee of jurists entrusted with expressing legal opinions on matters referred to them by the mufti. Those may include family disputes, disputes over inheritance and death penalties, which traditionally are referred to the mufti by the courts for a final decision on the sentence.

A training center would also be established to qualify jurists and equip them with the skills they need, offering those that complete their studies accredited certification from the Council of Universities rather than from Al-Azhar, a decision which has irked Sunni Islam's highest seat of learning, according to Abu Hamed.

“It is necessary that the jurists not only have knowledge of Islamic doctrines; they must also study other subjects besides fiqh [Islamic jurisprudence] such as psychology. They must also be aware of worldly matters and the changes happening around them such as technological advances,” Abu Hamed noted.

This is important as the jurists give nonbinding legal opinions revealing Islamic laws for issues of contemporary life in response to questions from individuals, judges or the government. The draft law also stipulates that the title “Grand Mufti of the Republic” be replaced by “Mufti,” and that the latter be treated like a Cabinet minister in terms of status and salary.

The bill, tabled by Osama al-Abd, head of the parliamentary Religious and Endowments Committee, which was drafted by more than 60 deputies, was met with stiff opposition from Al-Azhar. In a letter sent to parliament Speaker Ali Abdel Aal — who was a law professor at Ain Shams University specializing in constitutional law — before the July 18 parliamentary session at which the draft law was endorsed, Al-Azhar denounced it as “unconstitutional” and “an attempt to undermine Al-Azhar's independence.”

Al-Azhar suggested that some provisions of the proposed legislation be amended to bring them in line with articles in the constitution that state "any Islamic religious body is an integral part of Al-Azhar and that the latter must oversee the work of all religious institutions,” calling the draft law “a transgression” on its powers and on the independence of the CSS.

Lawmaker Omar Hamroush, a member of the Religious Affairs and Endowments Committee, downplayed the criticism. Acknowledging that Al-Azhar had expressed some reservations to the bill, he told Al-Monitor that those have been taken into consideration and discussed. “It is now up to parliament to fully endorse the bill in the next plenary session,” he said.

The proposed law is yet another bone of contention in the already troubled relations between Al-Azhar and the Sisi government. Having initially backed Sisi and the military-backed protests that brought him to power, Al-Azhar began to show signs of resistance when Sisi proposed a ban on verbal divorce in a bid to curb the high divorce rates in the country.

Al-Azhar responded to his call — made in a televised speech on Police Day in January 2017 — with a statement that verbal divorce is compliant with Sharia and that the divorce is valid once a husband utters the words “I divorce you” to his spouse — even if the divorce has not been officially documented .

Al-Azhar had also opposed calls by the government to unify Friday prayer sermons, expressing concern that the sermons would lack credibility and creativity if dictated by the Ministry of Religious Affairs and Endowments. But it later caved in to the demand, apparently under pressure from the authorities.

The rift between Al-Azhar and legislative and executive authorities widened in late 2018 after parliament discussed a draft law regulating fatwas in the media. Under the proposed legislation, only jurists from Dar al-Ifta, the Ministry of Religious Affairs and Endowments, the CSS and Al-Azhar's Research Center may give legal opinions on matters concerning Sharia. Moreover, issuing fatwas via broadcast channels will require permits from the concerned authorities.

Al-Azhar is opposed to the ministry having a role in the issuance of fatwas, seeing this as an encroachment on its duties. Despite its opposition to the bill, expectations are rife that parliament will endorse the bill in the coming weeks, according to Hamroush who tabled the proposed legislation.

“The bill regulating fatwas is both timely and necessary in light of the extremist fatwas that have emerged recently via satellite TV channels and other media platforms, creating confusion and sowing discord in society,” he said.

Hamroush was clearly referring to fatwas that have sparked controversy on social media by inciting sedition and violence against Christians. Earlier this year, a disputed fatwa by an Al-Azhar scholar declaring it is forbidden to offer zakat to non-Muslims, was quickly retracted after it sparked outrage from social media activists. Among other discriminatory fatwas issued by extremist clerics is one forbidding Muslims from praying for mercy for “nonbelievers” after they die and another prohibiting the Muslim faithful from greeting Christians during their festivities.

According to Abu Hamed, the draft laws come in response to Sisi's calls to reform religious discourse and stem from the need to fight extremism. “Resistance from Al-Azhar to the proposed laws is neither new nor surprising; Al-Azhar has always resisted change and wants to maintain its hegemony over religious institutions including Dar al-Ifta. It continues to play a patronizing role over its affiliates, leaving them with little space or freedom to carry out their duties, especially if this means embracing change,” he said.

Skeptics, however, argue that the government is using Islamic institutions like Dar al-Ifta to further political gains. A glance at Dar al-Ifta's Twitter account can only confirm their suspicions: Its timeline is teeming with tweets glorifying the army and others vilifying the “terrorist” Muslim Brotherhood. Those are worrying signs of politicization of the religious institution whose role is to offer Muslims religious guidance and advice.

Instead, the tweets to Dar al-Ifta's more than 325,000 followers indicate that the new legislation, which brings the Islamic legal body directly under the government's control, can only pave the way for greater state control over the religious narrative with Dar al-Ifta continuing to serve as a mouthpiece for the government.