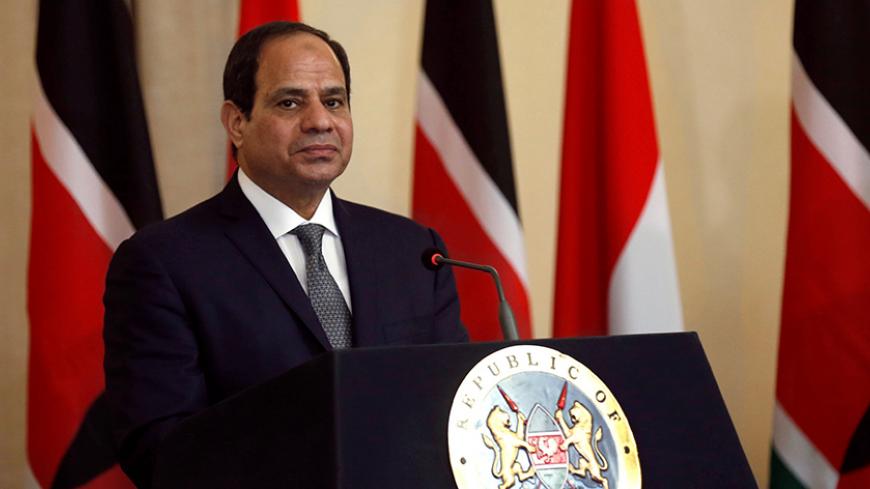 Egyptian President Abdel Fattah al-Sisi has raised controversy once again by calling for new legislation to annul verbal divorce in Egypt. During a Jan. 24 ceremony marking National Police Day, Sisi said, “I have asked the head of the Central Agency for Public Mobilization and Statistics (CAPMAS) about marriages in Egypt. He said 40% of the 900,000 marriage unions this year [will] end up in divorce within five years.”

In July 2016, Sisi had raised the ire of Egyptian citizens and clergy when he issued a decision to introduce a unified written Friday sermon. But with his latest comments, the president crossed a red line by discussing a doctrinal issue. Directing his Jan. 24 speech to Grand Imam of Al-Azhar Ahmed al-Tayeb, Sisi said, "We need a law to deal with divorce issues before the ‘maazoun’ [a government-authorized cleric who administers marriage and divorce] instead of verbal divorces, so that people will have the time to consider their decision of divorce.” This would mean that divorce could only occur in the presence of a legal maazoun, which many Egyptian religious authorities see as contrary to Islam.

Some saw that with this call, Sisi was turning a blind eye to Egypt's severe economic crisis and was instead addressing a religious issue that had been dealt with the previous year by Al-Azhar's Council of Senior Scholars. In March 2016, when Saad al-Din al-Hilali, a professor of comparative jurisprudence at Al-Azhar University, called for legislation to annul verbal divorce, it was considered controversial and not implemented by the council, which, as Al-Azhar's highest religious authority, is in charge of issuing fatwas and legislation on such matters.

Sisi's comments provoked anger among young Egyptians, as many continue to suffer from rampant poverty and widespread unemployment. One young Egyptian posted to Twitter: “People are committing suicide because of the financial crises and dying because of medical negligence, lack of medicine and all the president is interested in is marriage and divorce.”

In January, the National Council for Women welcomed Sisi’s call for a bill to annul verbal divorce. The chairwoman of the council, Maya Morsi, said in a press statement, “The president’s call is a new victory for women and the best proof that he is keen on preserving Egyptian family ties and keeping up with the renewed religious discourse.”

She continued, “Sharia calls for the unity and stability of families. Having a maazoun official administer the divorce would give couples a chance to reconsider a decision they might have made out of anger. This would reduce the number of divorces, preserving family unity and cohesion and protecting children against the pain they might suffer as a result of their parents’ split."

Following Sisi's comments, Grand Mufti of Egypt Shawki Allam said in a televised statement, “The marriage contract is established in the presence of parents, the maazoun and witnesses. The annulment of the contract must be ascertained. This means that proof must be provided [to] establish that the husband pronounced the divorce with the explicit intention to end the marital relationship. Dar al-Ifta only tackles divorce matters when the husband appears before Dar al-Ifta to make sure he really wants a divorce.”

Allam, who is also chair of the state-run educational body Dar al-Ifta, added, “According to Dar al-Ifta statistics, about 3,200 divorce cases are examined by Dar al-Ifta each month. After thorough and careful investigations, divorce is granted in about three cases only.”

He added, “According to the personal status law, verbal divorce is not legal. However, [sheikhs] pronounce the divorce if it occurs as per Sharia, and then we ask the maazoun to carry out the divorce. However, after investigation and inquiry, if we see that the divorce was inevitable, we would … request its authentication by the maazoun.”

He pointed out that Egyptian law requires the husband to authenticate the divorce within 30 days or else face a penalty.

“To change this we need a legislative amendment," Allam said. "The parliament must examine the pros and cons. This requires the contribution of sociologists, research centers and Sharia scholars.” Allam noted that Dar al-Ifta organizes premarital courses to prepare couples to assume their marital responsibilities.

Sameh Abdel-Hamid, a Salafi leader, told Vetogate online newspaper in January, “The verbal pronunciation is taken into consideration in cases of marriage, divorce, conversion to Islam, apostasy, etc. The authentication by virtue of written documents is a new phenomenon and was not applied at the time of the Prophet [Muhammad]. There is no verse or hadith limiting the occurrence of divorce to those authenticated by the maazoun or before witnesses.”

He added, “Those who argue that a divorce cannot occur if only verbally pronounced have no proof to substantiate their argument. On the contrary, their allegation is contrary to the provided evidence and to the opinions of imams and scholars. Undoubtedly, authentication by the maazoun is important but this is just an act to put down in words a divorce that had already occurred by being verbally pronounced.”

On Jan. 27, Ahmed Karima, a professor of law at Al-Azhar University, told Al-Ghad TV that “divorce verbally pronounced is the rule in Sharia. It is admitted by Islamic scholars that legitimate contracts are verbal contracts whereby parties express their consent and will. Documentation is an administrative procedure to preserve rights.

“Divorce occurs whether [expressed] orally, in writing or through gestures. It is unacceptable in Sharia for an authenticated divorce contract to replace the verbally pronounced divorce. This threatens the rules of Islamic legislation. Divorce has occurred when pronounced verbally since the time of the Prophet and this will be the case until the day of resurrection. Authenticating a divorce contract by the maazoun only aims to preserve marital rights.“

Mohamed al-Shahat al-Jundi, a professor of comparative jurisprudence at Al-Azhar University, told Al-Monitor, “Verbally pronounced divorce is valid as long as the man pronounces the phrase ‘I divorce you’ to his wife while being fully conscious and having the intention to divorce her. This has been admitted by the majority of scholars. Authentication of the divorce is a routine matter. Seeking to solve a problem does not mean we should depart from what has been prescribed by Islam.

“There should be a distinction between a divorce by virtue of a written document and a divorce pronounced verbally. It is necessary to raise the awareness of men and women so as to curb the rate of divorce. Men who misuse their right to divorce their wives, and women who anger their husbands and ask for divorce, must be sanctioned.”

Al-Azhar's Council of Senior Scholars issued an official statement Feb. 5 stressing the legitimacy of verbal divorce and the illegitimacy of any law that would ban this type of divorce.

“People now do not need divorce legislation to be changed; rather, they are in need of measures that would ensure a decent livelihood,” the council stated.