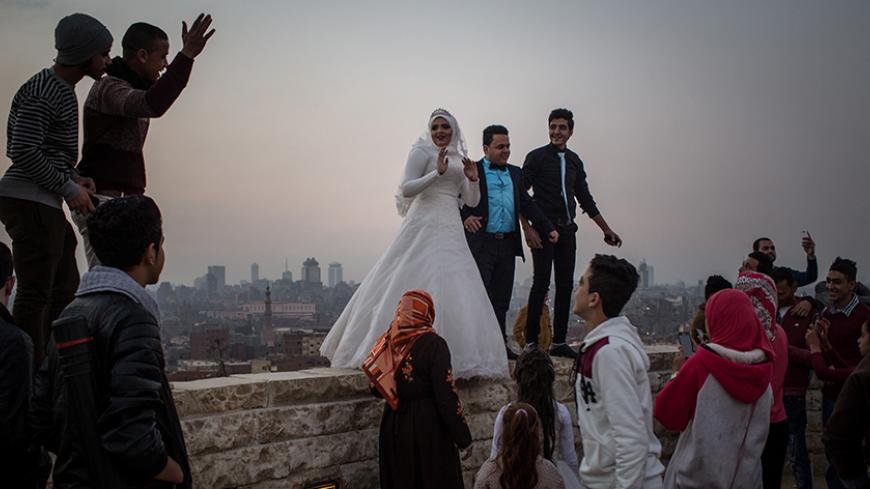 A newlywed couple poses for wedding photos on a wall in a park overlooking Cairo, Dec. 10, 2016. - Chris McGrath/Getty Images

CAIRO — Egypt's Dar al-Ifta announced Feb. 12 its new marriage preparation program for would-be couples and single people. The program, from the government institution in charge of issuing fatwas and offering courses on social issues, aims to familiarize Egyptians with marriage-related Sharia provisions on choosing a husband or wife, and also to educate couples about the engagement period, reproductive health and conjugal behavior, which includes sex education. The program will further prepare couples to deal with potential life problems and pressure.

Following Dar al-Ifta’s announcement, the Ministry of Religious Endowments announced Feb. 22 a new training program for imams that would teach them how to counsel couples through religious lessons and sermons. The program is part of efforts to counter Egypt's rising divorce rates.

During the press conference held to inaugurate Dar al-Ifta's program, Egyptian Grand Mufti Shawki Allam said, “Dar al-Ifta will offer in the coming period marriage preparation sessions across the governorates of the republic, since Dar al-Ifta is the mirror of society and tracks societal movement and the needs of citizens.”

He added, “The available statistics show that in the past five years the divorce rate has increased, especially in the first five years of marriage. We identified the problem, and we discussed its causes and ways to remedy it.”

Egypt's Central Agency for Public Mobilization and Assistance (CAPMAS) revealed a rise in the country's divorce rate, noting that 40% of the 900,000 marriages that take place each year end in divorce after five years.

Amr al-Wardani, the director of training at Egypt's Dar al-Ifta, told Al-Monitor, “The program will be held over six weeks, two days a week, and covers topics related to choosing a husband or a wife, how an engaged couple should behave, preparation for marital life, solving conjugal disputes, how to handle pressures of married life and how to understand each other’s character.”

Wardani, who is also the secretary of the Fatwa Council, said, “This is in addition to the rules of good companionship, which are based on the rules and terms governing the relationship between an engaged couple and their relationship to the family and society.”

He noted, “The program will cover all aspects related to family [relations], to prevent the [future] spouses from falling into potential pitfalls and committing mistakes.”

Wardani said the program will provide sex education, reproductive health lessons and medical counseling. He said Dar al-Ifta does not want to overlook such subjects since they "form the basis of marital life. The lack of this education is the cause of several conjugal problems. Providing sex education is not in conflict with the provisions of Islamic Sharia.”

He continued, “Egypt has high illiteracy rates, which have a direct impact on divorce rates. The program takes into consideration the need to address all mentalities and mindsets, and to simplify information in a bid to reach all segments of society and familiarize them with all relevant Sharia provisions that they need to comply with to avoid getting a divorce.”

According to CAPMAS statistics issued in September 2016, the illiteracy rate among Egyptians ages 10 and above is 29.7% (17 million illiterate Egyptians, according to the 2006 census).

“The prevailing misconceptions about marriage, spread by the radical movements through the media in recent years, have largely contributed to the surge of divorce incidents, and of course these ideas are against Islam and have nothing to do with it,” Wardani said.

Member of parliament Amna Nasir told Al-Monitor, “This insane hike of divorce rates pushed the state to discuss the reasons behind this frightening phenomenon and to identify its causes and solutions.”

Nasir, who is also a professor of faith and philosophy at Al-Azhar University, said, “Perhaps President Abdel Fattah al-Sisi’s discourse in the past days about the high divorce rates, and his attempts to curb them, is the biggest proof that this phenomenon has indeed drawn the attention of state officials. This is why Al-Azhar decided to offer marriage preparation sessions to help couples make the most appropriate choice and solve potential conjugal problems.”

In a Jan. 24 speech on the occasion of the 65th anniversary of the Egyptian police, Sisi called for enacting a new law to address the recent phenomenon of rising divorce rates in Egypt. Sisi demanded the cancellation of verbal divorce, which is permitted by Sharia, and warned against the negative consequences of divorce on the couple, the children and the community as a whole.

Nasir said, “I hope the campaign launched by Al-Azhar to reduce divorce rates will educate couples about marriage and the foundations of the marital relationship, and encourage them to seek the assistance of religious scholars and specialists from all fields, even from outside Al-Azhar University. Otherwise, the program will fail to achieve its objectives.”

She added, “I hope Al-Azhar, just like the Egyptian church, will require couples to undergo this marriage preparation program. This is necessary and important to build a healthy family that contributes to the advancement of society and raising children.”

The Egyptian Orthodox Church organizes mandatory marriage preparation sessions that include sex education for both women and men to avoid any future conjugal problems.

Wardani said, “Dar al-Ifta has experience of more than a hundred years in issuing fatwas and detecting citizens’ [social needs and problems]. This is why it hired several scholars and specialists from various Egyptian universities in the fields of life-skills development, reproductive health and sex education.”

Some of the program’s lecturers include Safaa Ismail Morsi, an assistant professor in the Department of Psychology at Cairo University; Khalid Abdul Malik, a professor of obstetrics, gynecology and infertility at the Faculty of Medicine at Cairo University; and Rasha al-Jamal, a lecturer in personality types and their impact on family formation.

“Al-Azhar scholars only give sessions on Sharia provisions and the rules of good companionship between spouses,” he said.

Regarding the turnout to the preparation sessions, Wardani pointed out that 120 young men and women have applied for this program, saying, “While the number is meager, it is, however, expected to increase when the trained couples start to feel they are really benefiting. We are still in the preparation phase, and I am confident that the next sessions will be extremely popular among citizens.”