A fatwa by a senior Muslim scholar permitting hymen repair in certain circumstances has sparked controversy on social media, with critics fearing it may encourage girls to engage in sex out of wedlock. 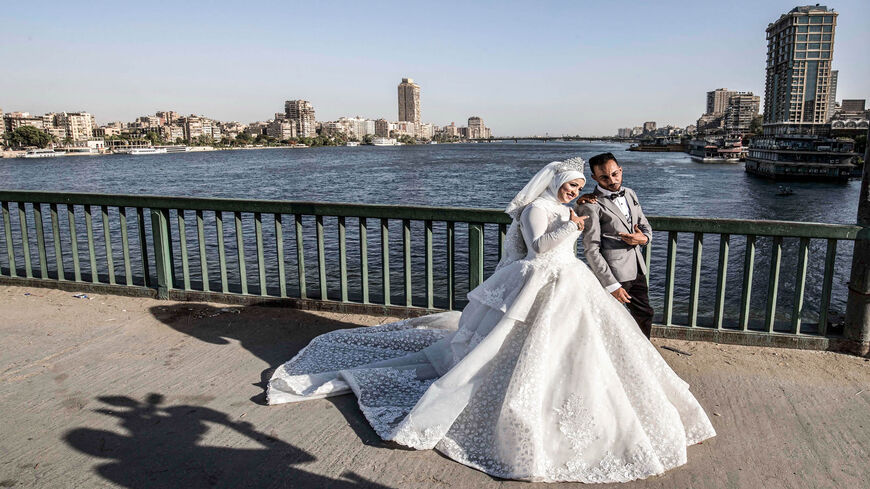 Ragab Uwais poses for a picture with his bride before a video cameraman for their wedding video along Al-Gamaa Bridge connecting Cairo with its twin city of Giza, Egypt, June 11, 2020. - Khaled Desouki/AFP via Getty Images

A controversial fatwa issued by a senior religious scholar permitting hymen repair or reconstruction has sparked heated debate on Egyptian social media platforms with supporters welcoming it as "sensible" and "long overdue," and opponents decrying it as fraud and deception. Critics feared it may pave the way for girls to have sex out of wedlock and resort to a quick fix before marriage.

During a live broadcast on Dar al-Ifta's official Facebook page Aug. 31, Ahmed Mamdouh, head of Sharia research department and secretary-general of fatwas at Dar al-Ifta argued that hymen repair was "required and permissible in some cases such as when a girl had been raped or tricked [into having sex out of wedlock] and wished to repent or turn over a new leaf."

He said that while spreading immorality in society is unacceptable, concealing sin is required. "Taunting or ridiculing sinners over their sins is tantamount to closing all doors of mercy and may lead them [the sinners] to despair or encourage them to continue practicing immoral acts and deeds," he noted.

He added, "However, there are some cases in which it is forbidden by Sharia to carry out the procedure of hymen repair." Although he did not elaborate further, he suggested that viewers refer to a research study on hymen reconstruction that he had authored years ago and that was available online. The study rules outperforming hymen repair surgery on "promiscuous" women who choose to engage in sex out of wedlock.

Mamdouh's comments came in response to a question posed by a female obstetrician on whether hymen reconstruction surgery is permissible in Islam. The latter stated that she performs such surgeries on survivors of rape and sexual assault and on girls who had been jilted by their lovers and feared reprisals if their parents or future husband found out they were no longer virgins.

Mamdouh's remarks immediately drew a backlash from critics; some argued that the fatwa defies the principles of clarity and openness that are key for a successful marriage. Others feared the fatwa may encourage girls to engage in pre-marital sex. Supporters, meanwhile, welcomed the ruling insisting that "satr" or concealment (of sins) offers survivors of rape or sexual assault a chance of new beginnings.

The fatwa issued by the Dar al-Ifta scholar is not new. In 2007, former Mufti Sheikh Ali Gomaa issued a similar ruling, raising eyebrows in the conservative, patriarchal society where premarital sex is frowned upon and a girl's chastity is perceived as being synonymous with the family honor.

More recently, in a June 4, 2020, episode of his show broadcast on the privately owned DMC channel, preacher Khaled El Guindy argued there is no relation between virginity and intact hymens.

"There is no such thing as an intact hymen being a sign of virginity. Would God put a stamp on women to indicate that they are virtuous and pure and not on men? " he asked a group of Al Azhar clerics appearing with him on the show. "God is the guardian who protects [people's] secrets. He would not use a broken hymen as a benchmark for virtuosity to dishonor or shame women. An intact hymen is not a sign of purity nor is a broken hymen a sign of impurity or immoral behavior."

He continued, "Women have been killed for no reason other than misconceptions and false beliefs perpetuated by ignorant people."

In an interview broadcast on Al-Hayat channel in 2009, Guindy insisted that girls were not obliged to tell their future husbands that they had undergone hymen reconstruction surgery.

"Do women expect their husbands not to have had sex before marriage?" he quizzed. "The same principle should apply to men who should not expect their wives to be virgins." His comments clearly shocked TV talkshow host Amr El Leithy who replied, "That is not the same thing; distinctions have to be made."

Leithy said that girls are expected to be virgins on their wedding night, and that is why the bride is often referred to as a “virgin” in most marriage contracts in reference to the bride. Guindy counterargued that by saying, "Those are the double standards and misconceptions that need to be corrected."

Despite such arguments in the mainstream media, the gap between the religious view and popular opinion on hymen reconstruction remains wide; many still associate intact hymens with purity and morality.

Although hymen reconstruction surgery is not outlawed in Egypt, doctors who perform the procedure in their private clinics often do so in secrecy because of the social stigma associated with loss of virginity before marriage.

One girl, who resorted to the surgery before her wedding for fear of her future husband finding out she was not a virgin when he married her, told Al-Monitor on condition of anonymity that she was sexually assaulted by the doctor that performed the surgery. "I suffered humiliation and disrespect at his hands. He treated me as if I were a whore," she complained.

So enormous is the pressure on girls to keep their hymens intact until their wedding night that some refrain from riding bicycles or horses for fear that doing so may accidentally cause them to lose their virginity. In some conservative Upper Egyptian villages, it is not uncommon for the bride's mother and mother-in-law to wait outside the bedroom door on the couple's wedding night until the groom victoriously offers them a blood-stained handkerchief or sheet as proof of his bride's virginity.

The bloodied cloth is then flaunted before the wedding guests who celebrate, often by firing gunshots in the air. If a bride does not bleed, she brings shame and dishonor to her family. The absence of blood may also result in the groom divorcing his wife on her wedding night. In some rare cases, brides that did not bleed have been beaten or even killed by the groom, her own father, or a male relative.

The increase in "urfi" (unregistered and often secret) marriages in recent years has resulted in a rise in the number of hymen reconstruction surgery, albeit in secret. In such marriages, the wife forsakes all her rights including alimony and her husband may divorce her by simply tearing up the piece of paper signed by them both, destroying the only proof that the marriage ever happened. Girls that find themselves in this situation often resort to the surgery as a lifeline that allows them to remarry without shaming their families.

Amna Nosseir, professor of Islamic thought and philosophy at Al-Azhar University, agrees with the fatwa, arguing that "it prevents the spread of vice and immorality." She told Al-Monitor that exposing or scandalizing girls or women who have been raped or were lured into engaging in pre-marital sex is harmful as it leaves them with no hope.

"When they are shunned by their families or society, they are left out in the cold and are not given an opportunity to seek decent lives. The [hymen reconstruction] surgery may give them a second chance and they may move on to become wives and mothers," she said. "God is merciful and compassionate and encourages the faithful to repent and seek forgiveness for their sins. Why then should society harshly judge or condemn those that have made mistakes in the past?"

Responding to a call from Al-Monitor on the Dar al-Ifta hotline, an Al-Azhar cleric said that girls who had undergone hymen reconstruction surgery need not inform their future husbands of this as it may cast a pall on the marriage.

El Sayyed Suleiman, another Azhar scholar, however, insists that girls who undergo the surgery should not hide this from their future spouse before marriage, "as honesty and truthfulness are key for a healthy relationship and successful marriage," he said.

"It would then be up to the prospective groom to decide whether to marry the girl or not," he was quoted by Al-Ain news site as saying. "The Prophet Muhammed preached honesty — betrayal and deception are not Islamic traits."

Despite the more tolerant religious view of hymen reconstruction surgery, it may be a long while yet before the practice gains broader acceptance in a society that continues to treat women as second-class citizens.